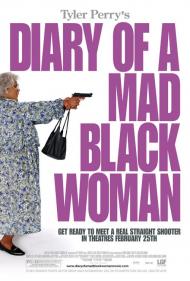 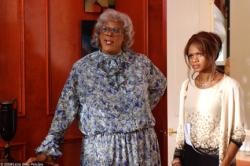 Being neither mad, black, or a woman, I guess it's not too surprising that I didn't really enjoy Diary of a Mad Black Woman. But maybe it should be surprising. A really good movie transcends its target audience, but clearly, this movie does not, despite a very funny turn by its writer, Tyler Perry, as the grandmother, Madea.

The movie is essentially a girl done wrong by a bastard of a man story. A very successful lawyer literally throws his wife of 18 years out of their house, while his mistress watches. The wife, Helen (Kimberly Elise) then goes to stay with relatives who all assure her that her husband just didn't know what to do with a good woman. The assumption from the beginning is that her husband is a bastard and she is a good woman, simply because she is a woman. Of course the fact that she knew her husband was cheating and chose to meekly stand by and watch it happen instead of taking action and moving on with her life, is never really brought up for consideration. I'm not defending her husband's actions, although they're so over the top bad as to be comical, merely questioning this movie's definition of a good woman. Obviously good and strong are two separate concepts here.

Helen finds shelter in Madea's house. Madea (Tyler Perry), is an old school, take no shit from anybody, carry a handgun, old woman. She encourages Helen to stand up for herself and move on with her life. Madea steals every scene that she's in and is quite funny. Sadly, she's not in enough scenes.

The other scenes are taken up with too many subplots. Helen falls in love with a guy who appears to have stepped out of the pages of a "Perfect Man" article in a woman's magazine. He's so sensitive and caring that he's down right boring. There's another subplot involving one of Helen's relatives who's a drug addict, and another with Helen's ex-husband defending a gangster. All these subplots really do is stretch the movie out and allow Tyler Perry to play two other parts besides Madea.

As a comedy this movie works. As a love story, the movie contains no sparks. The dialogue is stilted and unnatural, which belittles the drama.

Since this movie had such a strong opening weekend, I'm sure we'll be seeing a sequel. I only hope when it comes out that it's better than this one. 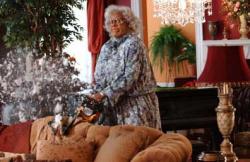 Madea does some redecorating in Diary of a Mad Black Woman.

You called it Scott. Since the release of Diary of a Mad Black Woman in 2005 Tyler Perry has turned his thuggish grandmother Madea (he originally created her for the stage in the 1999 play I Can Do Bad All By Myself) into a cash cow franchise. December 2013 will see the release of the eighth Madea film, A Madea Christmas. This follows Madea's Family Reunion (2006), Meet the Browns (2008), Madea Goes to Jail (2009), I Can Do Bad All by Myself (2009), Madea's Big Happy Family (2011), and Madea's Witness Protection (2012). Critics may not have fallen in love with her but audiences certainly have, as each and every one of them has turned a handsome profit.

I found the story to be uneven. On one hand it is like something out of a romance novel. Scott mentioned how the character Orlando, played by Shemar Moore, seems to have stepped from the pages of a woman's magazine article about the perfect man. He is there simply to provide the ideal male fantasy figure. On the other hand the scenes with Madea seem like they are from another movie entirely. Her over-the-top lowbrow sense of humor is funny but doesn't fit with the more dramatic side of the movie, especially the scenes showing Brian dealing with his junkie ex-wife.

Tyler Perry is a much better actor as Madea than when he is playing a man. He never seems completely comfortable in Brian's skin. Kimberly Alise is quite good in the lead role. She is adorably cute and plays the fragile scenes as well as she plays the angry ones. And speaking of the angry scenes, the movie takes a sharp left turn when Helen learns that her ex-husband Charles has been shot and may be paralyzed. She returns home to nurse him but finds that she is still so angry that she begins to torment him like a slightly less deranged version of Kathy Bates in Misery. Or as she tells Orlando after he calls her bitter, “I'm not bitter. I'm mad as hell.”

Madea provides the most laughs. Here's a good example of the level of humor to be found in this movie. When Madea accompanies her granddaughter Helen to the house Helen's husband has just unceremoniously thrown her out of, she confronts Charles's mistress. The mistress warns her, “I know Tae Kwan Do.” Unfazed Madea snaps back with, “And I know Whoop Your Ass.” She is also capable of giving pithy advise. At one point she tells Helen, “Love is stronger than any addiction, baby; hell, it is one.”

Diary of a Mad Black Woman is old fashioned and corny but also touching and funny at times. I enjoyed it but I also understand why critics have been far from kind. But no matter, as she has proven for nearly a decade, Madea is 100% critic proof. 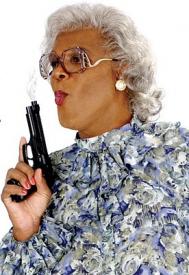 Patrick found this story to be uneven while I will describe it as schizophrenic. It’s a drama, no it’s a comedy. It’s a love story, no it’s a farce. Sure those things can all be in the same film but it is executed too poorly here to make sense. The opening scene is very heavy handed with a husband throwing his wife out of their home. Later we have a story of a single father trying to deal with his drug addicted wife. The love story is card board thin. A gorgeous wronged woman falls for a hunky handy man with the manners of a British gentleman.

In the middle of all of this is a tall man in drag playing a loud crass old woman. Sure, Madea provides all of the humor but she belongs in a different film. She is playing everything like a parody while all around her is heavy Lifetime movie of the week family drama. Every time she showed up I thought of Monty Python’s The Meaning of Life (1997) where one movie invades the other.

The only reason to see this film is for Madea but she seems in a different film than everyone else. The rest of the cast is in a family drama about broken marriages and drugs while she is packing a gun and exchanging quips with a girl whose clothes she just destroyed. “Did you do this? This is Vera Wang!” The girl cries about a designer dress Madea and Helen just ripped into pieces. Madea responds, “Who dat is? She do nails? I need to get my nails did.”

As Scott mentioned, Madea is intended to teach Helen to stand up for herself but none of the scenes without Madea are ever played for laughs. Even when Helen comes back to care/torture her husband it is played straight and very dramatic. Hasn’t Tyler Perry ever heard of Nine to Five (1980)? There was plenty of room for humor with Helen and her husband but it is all played extremely straight.

Did Tyler Perry actually think it made sense putting a larger than life character like Madea in such a dramatic setting or was he just being greedy with the jokes, keeping them all to himself?  As Scott wrote, Madea is not even in much of the film, thus making every one of her appearances even more jarring. Every time we settle in for some drama or predictable love story, Madea pops up to remind us just how bad all of it really is.

The only way this film could have worked for me would have been Madea in the part of Helen. Just picture it. Does it make any sense that Helen’s husband throws her out for a low class gold digger? Helen is complacent and hot as hell. She even lets him screw around on her. He has nothing to gain by getting rid of her and replace her with a woman of obvious less class. Helen provides the one thing he prides himself on, appearances. Having him get rid of Madea as his wife would have made all kinds of sense and that first scene could have been played like a WWE wrestling match.

Tyler Perry may have gone onto great success but his writing here is jarringly horrible.