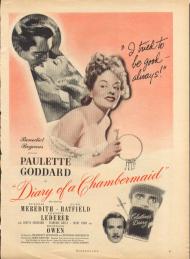 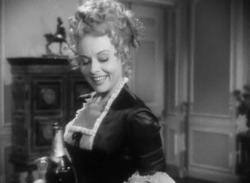 Paulette Goddard in Diary of a Chambermaid.

Jean Renoir directed Diary of a Chambermaid while living in California in the 1940s. It was adapted for the screen by Burgess Meredith from Octave Mirbeau's scandalous 1900 novel. It tells of the ambitious Celestine, a beautiful young servant who – according to a diary entry - has held a dozen different positions over the preceding two years (take that however you want).

Clearly this woman has been around the block a few times. She's grown jaded and weary of love and vows to find a wealthy man to marry just as she arrives at her new post in 1880's France. Along the way she befriends a mousy little scullery maid played by Irene Ryan (Granny from The Beverly Hillbillies) and encounters a sinister valet (the frightening Francis Lederer) who proves no match for the feisty Celestine.

Jean Renoir made beautiful movies that welcome the eye. His camera technique was deceptively complex yet poetry in motion. His renowned use of depth is simple yet arresting and never intrudes on the story being told. From a purely technical/visual standpoint he was a genius. All of these elements can be seen in Chambermaid but this intriguing little film is more than just the sum of its artistic flourishes.

This is an ensemble character study filled with excellent thespians expertly plying their craft. Paulette Goddard shines brightly as Celestine, the star around which every man in the story orbits. There's the master of the house (Reginald Owen), whom Celestine at first mistakes for a fellow servant, but he's a henpecked buffoon. Then there's the eccentric rich guy next door (Burgess Meredith in old man makeup. In real life he and Goddard were married at the time). But wait, what about George (Hurd Hatfield), the handsome young prodigal son returned suddenly from Paris? Meanwhile Joseph, the sinister valet, has plans of his own...

Diary of a Chambermaid runs less than 90 minutes yet it packs in several hours of plot and even tries on a few different genres for size. The beginning is played almost like a farce, including a smidgen of slapstick. This being Jean Renoir there's also plenty of class commentary going on. The family of the house, led by Madame Lanlaire (the brilliant Judith Anderson), raise their antique silver goblets every July 14 and drink to the death of the Republic. The eccentric guy next door is more democratic. He defiantly tells Celestine that he even sits down to eat with his servant girl, Rose (although Rose (Florence Bates) is actually his mother).

The final third of the story turns dark with more than a touch of noir. Yet despite these disparate elements the movie is structured in such a way that it never feels disjointed. The humor gives way to social commentary which then slowly turns ominous, while the characterizations remain constant throughout. The climax is riveting.

Diary of a Chambermaid was made in Hollywood but in tone and style it feels more like a European production. This is due almost entirely to its director. Jean Renoir is often regarded as one of the greatest directors in the history of film. This movie may not unequivocally prove that to be true, but is sure as hell doesn't disprove it.