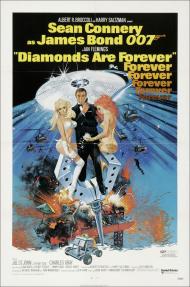 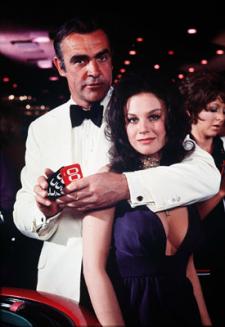 We just have to face it. Sean Connery is James Bond and the franchise has never been as good since he left the part.

The producers of the latest Bond films should sit down and watch Diamonds Are Forever, because if there's one thing these last two Bond films are missing, it's a sense of fun, which is something Diamonds Are Forever has in spades. Okay, so it goes too far sometimes and the plot is yet another hold the world for ransom story, no matter how crazy it all gets, it never stops entertaining. And isn't that what going to the movies is supposed to be about; entertainment?

Following the failure of George Lazenby's one-off turn as James Bond, the producers turned back to Sean Connery and the Bond formula that had proved so successful before. This time around they decided to abandon all sense of realism and went for pure escapism. Unlike in You Only Live Twice though, Sean Connery appears to be on the same page as the producers and seems to be enjoying himself in the part.

The plot starts off as a simple diamond smuggling operation that Bond is sent to investigate, which turns into (of course) a plot by Blofeld to hold the world for ransom, this time with a diamond powered laser-equipped satellite with the power to destroy a city with the flick of a switch.

Connery is in fine form here, even if his physical form is a bit worse than it was since we last saw him in the part. He shows he still knows how to deliver a punch and a punch-line with equal aplomb. After watching On Her Majesty's Secret Service and then this one, practically one after the other, just hearing that familiar Scottish brogue come out of 007's mouth was enough to bring a smile to my face.

Playing the part of the Bond girl this time around is Jill St. John. She's not the most sophisticated of Bond girls, 007 even calls her a stupid twit at one point, but she looks good in a bikini and provides some moments of comic relief.

Charles Gray is the third actor to play Blofeld in as many movies and he's the weakest of the three. He comes across as rather effeminate, which, let's face it, isn't that hard to do when you spend most of your time stroking a white pussycat, and he's not threatening at all. His supporting villains, Mr. Wint and Mr. Kidd are also hardly intimidating and equally as effeminate. Even together they hardly seem a match for Bond. Especially as there are several opportunities for them to just shoot Bond and get it over with, but instead opt for the more complicated, less certain method of disposing of him.

All of the fun of the movie does come at a price. There aren't really any moments of tension as you know that Bond isn't going to get hurt under any circumstances. Some of the humor falls flat as well and some of the movie doesn't make much sense. Everyone in the movie, for instance, has heard of James Bond. He's a celebrity. Hardly something that would suit a spy. And in the scene with Bambi and Thumper, I'm not sure what's worse; the two girls kicking Bond's ass, or the pink tie that he's wearing while they do it.

Fun is definitely the thing that is lacking from Daniel Craig's Bond movies. I'm not saying they should go all out as this movie did, but a touch of the old Bond wit and charm would go a long way toward improving the next installment.

Tiffany Case being very cooperative on the fish tank bed.

Blofeld comes across as very effeminate. Like the bad guy at the beginning of Thunderball, he dresses in drag at one point. This movie was made before political correctness, and it definitely is making fun of Mr. Wint and Mr. Kidd for being gay. The holding hand scene comes to mind.

The, “several opportunities for them to just shoot Bond and get it over with, but instead opt for the more complicated, less certain method of disposing of him.” are hilarious now that Austin Powers has spoofed these very types of plot points. This is one of the funniest Bond movies, but not always intentionally. I liked it when Case pulls in front of a van so Bond can sneak in the van’s backdoor. Not only does the van driver not notice, but the guy in the car directly behind the van must be blind, as he does not react, in the least, to Bond stowing away in the van right in front of him.

Another ridiculous moment comes when the two gay hitman knock Bond out by hitting him on the head, drive for miles, put him in a pipe, which hours later gets lifted by a crane, put into the ground, attached to other pipe sections and then covered with dirt. At no point during all of this do any of the workers notice a body in the pipe. Even more amazing is that Bond stays asleep all this time.

The scene with Bambi and Thumper is another WTF moment. Their fight starts with Thumper kneeing Bond in the groin. He eventually subdues them by holding them each underwater with one hand on each of their heads. Why did they not just hit him in the groin while underwater? Their hands were free. Maybe they let him win because the small pink tie was doing more damage to Bond than anything they could dish out.

Diamonds are Forever is the most lighthearted of the Connery, Bond movies. It also has some classic scenes. The large chested slut at the casino bending over in her low cut dress and introducing herself as Plenty is one that always stands out. The most famous is probably the car riding on two wheels. I never noticed it before, but the scene is vastly flawed. Bond drives down an alley on the two passenger side wheels, but when the car comes out of the alley it is riding on the two driver side wheels. I guess it all just adds up to one of the campiest, yet entertaining, Bond films.

James Bond takes a swim with Bambi and Thumper.

For sentimental reasons this is my favorite Bond movie. In the summer of 1972, when I was 5, our family saw this movie at the local drive-in theater. It is one of my earliest movie memories. I hadn’t watched Diamonds Are Forever all the way through since I saw it then and I clearly remembered many scenes, especially those at the beginning since I most likely fell asleep before it was over. The opening credits, with Shirley Bassey singing one of the best Bond themes ever, stood out clearly in my memory. I also remembered the scene where Bond almost gets cremated alive.

This is clearly a less serious Bond than Connery’s other movies but it definitely brought the franchise into the 1970’s and set the stage for Roger Moore. Jill St. John plays her Bond Babe as a bimbo and this suit’s the Las Vegas locale. It didn’t bother me that Blofeld was effeminate, that doesn’t mean he can’t also be menacing. The actor that plays him, Charles Gray, I recognized from The Rocky Horror Picture Show.

Diamonds Are Forever changed the Bond formula by being more over-the-top with its action scenes and more silly in general. Roger Moore’s 007 would take this concept and run with it. This may not be the best Bond movie but it might be the most entertaining.