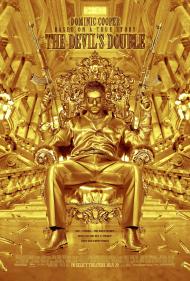 The Devil's Double is a violent and lurid movie about Saddam Hussein's son Uday and the man he chose to be his “fiday”, which in Arabic means body double or – more accurately – bullet catcher. Dominic Cooper gives an electrifying performance as both the sadistic, power-hungry Uday, and Latif Yahia, an unfortunate young man that closely resembles the Iraqi dictator's son. Latif at first refuses the offer to pose as Uday, even though he is being tempted with all the spoils of the kingdom.

He acquiesces after being told, “Please be clear about this, Latif. Uday has chosen you. You belong to him. You have about five minutes to think about this before a car pulls up outside your house in Al-Adhamiya and your family, everyone one of them - your father, your mother, your sisters and brothers is thrown into Abu Ghraib. God willing, they will die quickly. I've said too much. You have about two minutes left.”

What follows is a coked-up, sex-fueled ride of depravity, set in the 1980s and early 90s, with the unwitting Latif forced to ride shotgun. I have no idea how historically accurate this supposedly true story is but it is entertaining in the same sense a train wreck is. You are horrified but can't look away as Uday leaves a path of destruction and ruined lives wherever he goes.

This includes butchering his father's favorite bodyguard with a carving knife in front of a room full of birthday party guests, abducting 13 and 14 year old school girls off the street and raping and beating them before having his bodyguards callously dispose of their dead bodies and – in one particularly obscene act - brutally raping and beating a bride on her wedding day, in her wedding gown, while her husband waits helplessly downstairs with the other guests at their reception.

Latif is forced to undergo plastic surgery to further resemble Uday. He also gives televised political speeches in Uday's staid. Uday's brother Qusay isn't fooled though. When Uday asks how he knew it wasn't really him giving the speech, his brother replies, “For one thing, he's sober. And second, he's not foaming at the mouth.”

The Devi's Double is a fast-paced, beautifully shot story about the inner-workings of one of the world's most notoriously corrupt regimes. Like Cooper, Philip Quast pulls double duty. He plays both Saddam Hussein and a man called Faoaz. Saddam's body double.

But what really elevates the material is Dominic Cooper's dual performances.

As Uday, he is the embodiment of debauchery and dissoluteness. After picking up a young girl on the street he tells a disapproving Latif, “Think what the fuck you like. I like cunt. I want cunt. I see a cunt, I want to fuck it. I don't care. I love my country. I love my mother and father. But I love cunt more than I love God!”

As Latif, he is the moral compass of the movie, completely sickened by the acts of depravity he's forced to be a witness too. Eventually he attempts suicide.

Actually it's really as if Cooper is playing three parts. He is the sadistic Uday, grinning that evil grin and constantly shoveling coke up his nose; he is Latif the Iraqi everyman caught in a hellish situation from which he cannot escape; and he is Latif posing as Uday, outwardly playing the part while displaying an inner disgust at himself through his sad eyes. He is simply brilliant. Dominic Cooper was robbed of an Oscar nomination.

If you want to know how the story concludes you have to see the movie. I won't give it away but I highly recommend The Devil's Double. 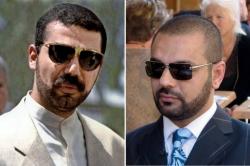 On the left the real Uday Hussein and on the right the real Latif Yahia.

Although The Devil's Double is far better than much of what was released in U.S. theaters in 2011, it only received a very limited theatrical release in the United States, and for good reason.  This film depicts Uday Hussein and his father Saddam Hussein as severely detrimental leaders to the country of Iraq.  It shows the torture and complete disregard for the welfare of the citizens of their own nation.  It goes so far in showing how sadistic the Husseins were that this film alone justifies George W. Bush taking the Husseins out of power.   As we all know, the last thing liberal Hollywood wants is to justify a Republican going to war.   After watching this film, you will be glad they were taken out.

With that said, a quick search on the web reveals that the legitimacy of Latif Yahia's story has been seriously challenged. Some journalists have investigated his claims and have found that there is no proof he was ever Uday's double.  People close to Uday have even said he never had a double.  Some reports simply state Latif pretended to be Uday on his own to get special treatment.

Some of the exploits shown in this film though are noted to be true.  Uday did in fact kill his father's "pimp" in front of party guests and he was seriously wounded in an assassination attempt, with no one actually believing Latif was behind it.  Uday had a reputation of raping and killing girls.  He was briefly married in real life, but this film never mentions it.  He was in charge of the Iraqi futball team.  The film briefly mentions the IOC, which sent investigators to Iraq when it was rumored that the players were being mistreated.  Players later testified that Uday ordered them jailed or tortured when they did not play as well as he deemed they should.

Although Latif Yahia may have made up much of his personal story or at least exaggerated it, he makes a point to mention several times that he has a bigger penis than Uday,  it is a revealing look at a completely sadistic man in power.   When Uday's palaces were taken during the war, they were a veritable treasure chest of decadent valuables, ranging from a priceless wine cellar to a collection of sports cars worth millions.  There is no better example of English historian Lord Acton's famous quote, "Power tends to corrupt, and absolute power corrupts absolutely."

For a man who has so much at his disposal to do, this film shows him spending lots of time with Latif, as if he may actually want him around as a real friend.  Their relationship is unconvincing and never rings true on any level.  If Latif did the job under threat of his families safety why does he act so bravely defiant, knowing such action threatens his families very lives.   The story tries very hard to make Latif a hero and that alone makes his story seem all the more dubious.

I agree with Patrick that Dominic Cooper was deserving of some acting recognition.  His performance is the best thing in the film.  Again, if Hollywood had given him a nomination, it would have brought attention to this barely promoted film and Hollywood is not about to shed any good light on a Bush President.  No doubt Zero Dark Thirty, whose commercials will be shown in theaters now until it's release in December,  about the hunt and eventual killing of Osama Bin Laden will get plenty of media attention as it is key election campaigning time.