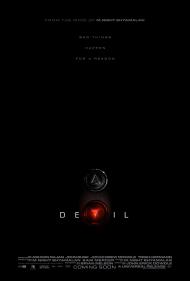 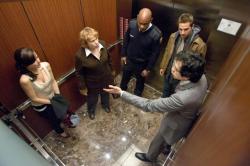 The Devil is among them.

I often complain that Hollywood rarely shows Christianity in good light.  Read Scott's Easy A review for an example.  Although Devil is not actually religious or at all preachy, it is surprisingly pro Christianity.  One character even clutches a cross he wears around his neck for reassurance.

Devil is a film that gave away the key plot point of Satan being trapped in an elevator with five people in the previews.  It occasionally goes dark, and when the lights come on, one of them is dead.  The audience waits as the list of suspects grows smaller.  It is essentially a horror film with a very limited set.

The Devil wants to claim some souls and the group of folks in the elevator are all good candidates.  A security guard, and narrator, knows what is happening as his mother told him of such stories.  The last line in the movie is him narrating that you should find comfort in the Devil's existence because it also means that God exists.

The message of Devil is that taking responsibility for your actions and forgiving those who trespass against you is the path to righteousness and salvation.  Every person on the elevator has a skeleton or two in their closet.  Will any of them find redemption in time to save their soul?

The set up and execution is engrossing enough to keep you wanting to see it through.  The gimmick of the entire film is the identity of the Devil.  I was curious to see who it was, but it actually does not matter.  The film would not have been any different had it been any of them.  Devil is worth the matinee ticket price, but I do not see it being added to many DVD collections.