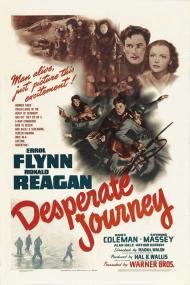 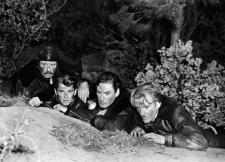 Sometimes I find myself enjoying films with the simplest of plots. Scott can attest, that sometimes I get confused if there are too many characters and scene changes. I know that is not something a film critic should mention, but some movies can be too damn complicated.

Desperate Journey follows a bomber on a mission over Nazi Germany. It gets shot down after bombing their target. They get captured by the Nazi's, but in the process discover a hidden German aircraft factory. They escape and try to make their way back to England. Not only do they want to make it back to friendly territory, but they need to let the powers that be know of the secret factory.

On their journey across Germany, Lt. Forbes decides that he and his men should try to cause as much damage to German interests as possible. This sounds heroic, but it comes with a cost as his men start dying along the way. Like Tom Hanks' character ordering his men to take the German position they could have just as easily walked around in Saving Private Ryan (1998), Forbes makes decisions here that I am sure he would question the rest of his life.

Desperate Journey works as an action adventure film. The men steal vehicles and get into car chases. They run over roof tops being pursued by Nazis. They get shot at and never know who to trust. This all makes for a fairly exciting film. Alan Hale provides some levity along the way. He is good for a couple of laughs, but his antics of spitting seeds at everyone, including Nazi guards, threaten to erase the tension.

The story line rarely leaves the men on their escape. This keeps the movie focused, and the plot driven. The men are a smorgasbord of nationalities. There is a Brit, an Aussie, a Yank and a Canadian in the flight crew. I do not believe there were actually too many international crews, but for the sake of the viewing audience of 1942, it demonstrated international solidarity against Nazi oppression. 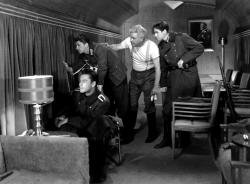 An overly complicated plot is certainly not a problem for this movie. A child could follow this old fashioned Boy's Own adventure story. It's a straightforward rousing action tale that remains almost as entertaining today as it must have been to audiences of the day.

The story plays out like a fantasy. This small group of international allies are dropped behind enemy lines where they wreak havoc with impunity, outwitting the dimwitted Nazis at every turn. Yes, some of the good guys die, but they're all clean and noble deaths with the men gladly sacrificing their lives for the cause. This small group of commandos are so effective that it's a wonder they don't single-handedly win the war all on their own.

Flynn, as usual, is terrific as the charming, rogue adventurer. The term dashing should have a picture of his face next to the definition in the dictionary. His light hearted bantering is even more impressive when you learn that during filming he was diagnosed with Tuberculosis. Flynn, worried about taking unpaid time off to recover, chose to conceal his condition from the studio.

Although Flynn and Reagan share a nice chemistry on the screen, reportedly there was some friction behind the scenes when Reagan was given the scene where he lulled Massey's Nazi into a false sense of security with some rapid-fire double talk before slugging him unconscious. Flynn is said to have sulked and lobbied to be given the scene, but to no avail.

Reagan received his real life call-up papers during filming and while the studio lobbied for him to be given a 30-day extension, the Air Force was only willing to offer him an extra week, forcing director Walsh to shoot Reagan's scenes first. This film marked the highlight of Reagan's career as his post-war career, in Hollywood at least, would never again burn as bright.

Something that does stand out about this film is the way that not all Germans are portrayed as evil. Very often in war movies of the day, everything is kept very much in terms of black and white, good vs evil. Here though, there are several Germans shown to be fighting against the Nazis and willing to help Flynn and company along on their journey.

A Desperate Journey is a rip roaring adventure story. It might not be very realistic, but it is entertaining. 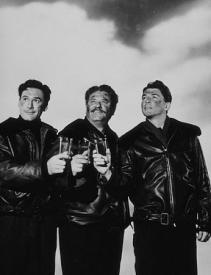 Desperate Journey is such a product of its time. Take the last scene, which is pure propaganda. As the surviving heroes fly into the setting sun over England, Flynn says, “Now for Australia and a crack at those Japs!” You have to admire the spirit behind this movie. It was 1942 and the outcome of the war was far from certain but America, and Hollywood, were confident enough to make this picture. There isn't a cowardly moment in it.

Sure the action is unrealistic, and old fashioned in style, but in the experienced hands of director Raoul Walsh this remains gripping entertainment. The comic book ease with which these downed Allied soldiers outwit, out maneuver, and out fight the Nazis borders on self parody. Just check logic at the door and go with it and you're certain to enjoy this exciting WWII adventure yarn.

It wastes no time on unnecessary exposition or periphery characters. As Eric said, the focus never strays from Flynn and Company as they do damage behind enemy lines. The formula becomes clear early in the picture. They are forever hiding just in the nick of time to elude capture only to overpower the enemy and steal their uniforms. This setup is repeated several times in various forms until the riveting climactic battle where they steal the plane intended to bomb London.

Not only are there different nationalities represented but it also includes two of the most common war movie character cliches; the grizzled old veteran (Hale) who fought in the last war, and the young rookie (Sinclair) who's the son of a war hero. Flynn is the impossibly heroic leader, Reagan the wisecracking Yank, and Arthur Kennedy the serious, levelheaded one, against taking unnecessary chances. Together this band of soldiers form a classic war picture trope.

Ronald Reagan really shines as the lone American in the outfit. His doubletalk scene with Raymond Massey (boy he made a great villain) is his best moment. There is also an inside joke that audiences of the day would have found amusing. After being awakened, he complains, “Why do you have to wake me up every time I got a date with Ann Sheridan?” Reagan had played opposite Sheridan three times, including in his two previous pictures.

It's been said before many times but it's worth repeating in regards to Desperate Journey; they sure don't make movies like this anymore!