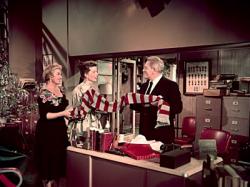 Katharine Hepburn and Spencer Tracy made some great films together. Desk Set is not one of them. They work, of course, very well together but there is, surprisingly enough, very little spark between them.

Hepburn plays the head of a research department of a broadcast company. Tracy plays a computer geek who is going to install a computer in her department. Hepburn assumes she and her co-workers will soon be out of a job. She is suspicious of Tracy but slowly finds herself falling in love with him, especially after her current boyfriends continues to put off getting engaged.

The set up should have and could have lead to several great conflicts and arguments, but alas there is little friction to be found. The dialogue is unremarkable. Joan Blondell gets one of the best lines when she and her co-workers are eyeing Tracy as he measures the size of their office, "Do you think we're being redecorated?" One of the girls asks. "Does he look like an interior decorator to you?" Another one says. "No." answers Blondell, "He looks like one of those men who suddenly switched to vodka."

Desk Set was originally a play and it shows. There are really only two sets in the entire movie. The director should have really expanded the dimensions of this movie with some location shots. It takes place in New York but the one time anyone is supposed to be outside, it is plainly obvious that they are on a sound stage.

Tracy and Hepburn are one of the greatest screen teams of all time. However, you will have to looks at some of their other films to really see how good these two can really be. 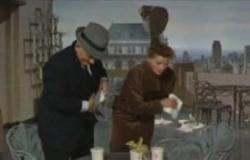 Desk Set is either a pretty weak comedy or a fairly entertaining advertisement for IBM's mainframes of the the late 1950s and early 1960s. As a comedy it has its moments, but these should be attributed more to the chemistry of the actors rather than the wit in the script. The opening credits reveal that the makers of this film wish to thank International Business Machines for its help with the film. Given that it was around this time that computers were first beginning to appear in offices, you have to wonder if this wasn't some kind of ploy on IBM's part to help people get used to the idea.

It is rather interesting to note that most of the research the women do in the film could now easily be done using a PC and Google today. It shows just how far we've come technologically in 50 years.

The movie is definitely a product of its time period. Hepburn plays Bunny, a woman past the flower of youth and one who runs her own department at a major television studio and yet she still acts giddy as a school-girl when it comes to men and she is obviously desperate to get married. There is little to no romance between her character and Tracy's. They seem more like good friends rather than two people passionate for one another.

To me the most entertaining scenes in the film involve all four of the research department girls. They share a spark and a banter that is missing from the rest of the movie.

One other interesting side note. Desk Set is written by Phoebe and Henry Ephron, the parents of writer/director Nora Ephron, who would one day write her own movie about love in the information age, called You've Got Mail. 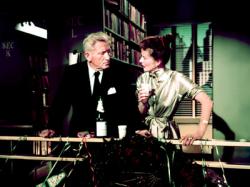 Spencer Tracy and Katharine Hepburn in their penultimate movie together, Desk Set.

Hepburn and Tracy were a great movie team. They played off each other well and had exquisite timing together. However the only one of their movies in which I felt they were believable as a romantic couple was in Guess Who’s Coming to Dinner where they play a couple past the age of physical passion. In this movie, as in their earlier films together, they come across as best buds without any spark of romantic chemistry. It adds weight to those persistent rumors that their 27 year off-screen relationship was really a “beard” for the fact that they each preferred the company of the same sex.

Ironically Hepburn had much better chemistry with Cary Grant, Humphrey Bogart, John Wayne and Henry Fonda than she did with her most famous screen partner, Spencer Tracy. That said she has way more connection with Tracy here than with her supposed boyfriend played by Gig Young. She seems downright uncomfortable in her scenes with him. And I agree that the mature and mannish Hepburn seems quite ludicrous playing this 1950s female stereotype.

Actually it is with Joan Blondell that she exhibits the most chemistry. The movie even hints at their latent lesbianism several times. In one scene Hepburn jokes about the two of them being old maids and moving in together and having a lot of cats. Also notice how Blondell shows up (jealously?) in nearly every scene where Hepburn is entertaining one of the male leads. They act like an old married couple finishing each other’s sentences and hugging a lot.

Hepburn’s best scene is where she is given the quiz by Tracy. She had a facility with dialogue and a great memory as this scene aptly demonstrates. It is funny and a great showcase for her talents. The office Christmas party scene is a wonderful reminder of the cocktail generation. In fact the entire movie is a Technicolor souvenir of the 1950s. The styles, attitudes and new technologies of the era are on full display.

Desk Set has its moments but overall is uneven and awkward, although it does feature one of the most famous pairs in movie history.