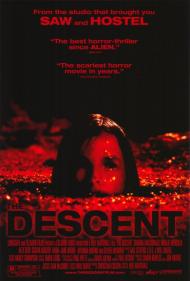 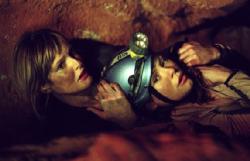 Shauna Macdonald in The Descent.

Although most movies defy my expectations, either falling below or above them, I can't remember a movie that so completely blew them away like this movie did. The previews certainly didn't help. From what I could tell from them, this was a movie about five attractive women, who could all be models (or at least work behind the perfume counter at Bloomingdales), who decide on a lark to go spelunking where they are then systematically killed by some bloodthirsty creatures. While they do all, inexplicably, go down into the cave in full makeup and some of them are killed, the way their story is told belies the flippancy of the previews.

One of the biggest difference between this and so many other horror movies is that here time is actually taken to develop each of the women as three-dimensional characters. Not in any deep or time-consuming way, but enough to establish them so that when eventually some of them are hurt and killed you actually feel something for them. These aren't just some bimbos put on the screen so that they can get naked in a shower and later get hacked to pieces.

The story is set in the mountains of North Carolina. One year after one of their group, Sarah, lost her husband and daughter in a car accident, they've reunited to go spelunking in a safe and easy cave. This isn't so much out of character since they've often embarked upon adventure holidays. Soon after entering the cave, there is a cave-in and Juno, who set up the trip, reveals to the other that they're not in the cave they thought they were, since she thought that one was too tame and safe. The rest of the movie is their attempt to find a way out.

For most of the movie, nothing supernatural or unrealistic happens and this is actually my favorite part of the story. It just deals with the group of them trying to escape the cave through narrow tunnels so tight that you'll actually feel the claustrophobia, across gaping chasms and other natural obstacles. It is to the film-maker's credit that these scenes are filled with real tension and edge-of-your-seat moments. If the movie never went into gore-fest mode, it still would have been great.

However, when Sarah sees something moving ahead of them in the cave, all hell breaks loose as they are suddenly set upon by subterranean creatures that sort of look like half-man/half-bat, only without the wings. In the credits they are referred to as Crawlers. They begin attacking the girls and eating the ones that they catch. I won't say who lives or who dies, but let's just say that not everybody makes it out alive.

So many horror movies claim to be frightening or the previews make them look suspenseful. The Descent, which I figured would be anything but, judging from the previews, turned out to contain some very frightening and suspenseful moments indeed. Reportedly the version of the movie released here in the United States has a happier ending than the original one that was shown in Britain. Which leads me to ask, if this is the happy version, just how much hell is there in the original? 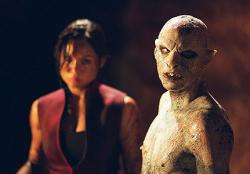 The action is good, but it could have benifited from a little more characterization.

The Descent works as a companion piece to The Cave. Both films are about some folks getting attacked by subterranean creatures, while they try to find their way out of a cave. As Scott wrote, The Descent gives the characters a little more personality, but not really enough to distinguish one from another. Okay, there was the widow, the "sporty" (lesbian) and the oriental looking one who had the affair with the widow's husband. The other three are completely interchangeable. All 6 curse, drink beer and pick on each other like men do. They take very butch vacations. In fact, this movie could have starred 6 guys. I wonder why the writer/director, Neil Marshall, went with women? This movie plays like it was written for men. The one and only guy in the movie is having an affair. I would have thought a woman wrote this movie.

The movie kept my interest until the moment where Sarah confronts Juno. They are in this cave and likely to die from the flesh eating predators. So logically, Sarah decides to kill her friend to exact some revenge? I guess it's true what they say about a woman scorned. Even in the midst of fighting for her life this woman stops to confront her friend about her betrayal. How about you help each other get out of the cave and then deal with the issue?

I agree with Scott, that Marshall does some great directing here. He makes climbing over a chasm more suspenseful than fighting the crawlers. He directs these woman to show amazing tension and concern just crawling through tunnels. He is definitely a better director than writer. Having them turn on each other and take sides while under ground would have made a very good movie on it's own.

The Descent seems simply manufactured to show that women can be tough. There is not one girlish, girl in the group. That is all fine and dandy, but with the addition of the crawlers, it is as if The Descent were a Lifetime television movie for women that wondered onto the set of The Cave. 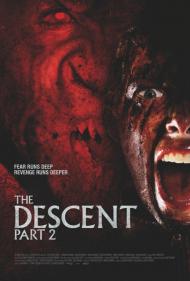