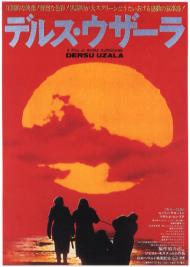 Dersu Uzala was legendary Japanese filmmaker Akira Kurosawa's first non-Japanese-language film (it's mostly in Russian but there is a dubbed English language version available). Based on the memoirs of Russian explorer Vladimir Arsenyev, it was co-produced by the Soviets and was filmed entirely on location in the Russian Far East. Dersu Uzala also has the distinction of being the only Kurosawa movie to be shot on 70mm film. It won the Best Foreign Language Oscar for 1975.

The story opens in 1910. As Captain Arseniev returns to visit the grave of an old friend he is surprised to see how much civilization has encroached on the ancient forest. The story then flashes back to 1902 when Arseniev was leading an expedition to survey the Russian wilderness. He and his men are joined one night by an old nomadic hunter named Dersu Uzala. He casually enters their camp, sits down and lights his pipe. The very next day he begins to act as their guide.

He and Arseniev, whom Dersu fondly calls “Cap-ee-tain”, become fast friends. This bond is made even stronger when Dersu saves both of their lives during a blizzard on a frozen lake after Arseniev and Dersu get separated from the rest of the group. Dersu shows Arseniev how to quickly build a shelter using grass and the men survive the storm inside this pile of straw.

When Arseniev and his men head back to civilization, the captain invites his new friend to go along. Dersu politely declines the offer, saying that a town is no place for him. They symbolically part ways at a railroad track with Arseniev and his men crossing it and Dersu heading back to the forest. In 1907 Arseniev is leading another expedition in the region and looks forward to reuniting with his old friend. They do meet up again and begin having new adventures together, including being stalked by a tiger. This leads to the film's final act, as Dersu comes to terms with his advancing age and waning eyesight.

Dersu Uzala plays out like a Western. With very little change it could easily be the story of a United States cavalry officer exploring the Rockies who befriends a Native American. The dialogue is sparse and nearly the entire movie takes place outdoors. The bond between these men from such different backgrounds is at the heart of the movie – as is man's relationship with nature. Dersu lives in harmony with the elements while civilized man seeks to conquer them.

Russian born actor Maxim Munzuk gives an unforgettable performance in the title role. Although he is playing essentially a simple man, Munzuk uncovers many layers of emotion in Dersu. He is the heart at the center of the story. Yuri Solomin plays Captain Arseniev. It is through his eyes that we see Dersu. Their friendship is uplifting and ultimately heartbreaking.

Dersu Uzala may not be Akira Kurosawa's best, or most celebrated, work but it tells a compelling and beautifully wrought story that is well worth checking out.