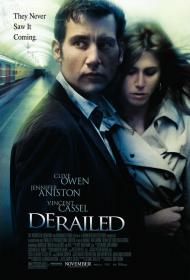 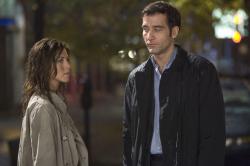 Derailed is one of those thrillers where you just know where the plot is going if you pay half enough attention. The entertainment is then left to how the plot will get to where you know it is going. In the case of Derailed, the plot provides too little surprises and too many annoying side plots.

Married business persons, Charles and Lucinda, meet while commuting by train to work. They both have unhappy personal lives and soon decide to have an affair. Upon their first hotel visit, Charles is beaten and Lucinda is raped. Upon taking their wallets, the thief/rapist discovers that they are not married to each other and decides to blackmail them as well.

Charles' life gets turned into a nightmare as the thief shows up at his house and meets his wife and daughter. A coworker gets killed trying to help Charles with the blackmailer and Charles ends up being a suspect in the murder investigation.

Owen is getting better as an actor but his accent was very flawed. Several times he would say a line and his British accent would slip in. He plays Charles like a passive victim to his life. It is hard to feel for him when he spends most of the movie reacting to what is happening instead of being more aggressive. The end, of course, has him take matters into his own hands.

Aniston is fairly bland here. Her's is the secondary role. She has much less screen time than Owen and her character is never, at all, fleshed out.

Derailed never finds solid enough ground to really get the audience caught up in it. As a thriller it contains a few plot twists. Again, the big one is easy to spot half way through the movie. Charles' daughter has medical problems and thus the audience is supposed to have empathy for him and his family. The man has an affair and we, the audience, are supposed to see him as the good guy?

With less expensive stars, and from the wife's point of view, this would have made a decent Lifetime television movie. For a theatrical film with the likes of Owen and Aniston, it is a disappointment.