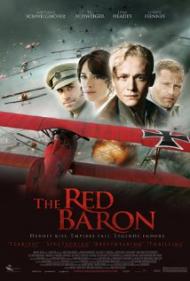 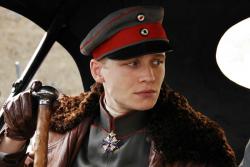 Although the Red Baron died a hundred years ago, he is still very much remembered, save in no small part to a brand of pizza and an animated dog that has an aerial battle with him every Halloween. The story of Manfred von Richthofen is an entertaining, although unexceptional, one. Men of war often have stories of action and adventure to tell.

Richthofen was from a wealthy family. He became a pilot and fought on the side of Germany in World War I. An early scene depicts Richthofen and other pilots eating a meal on china as a toy train circles the table. Like all pilots of all wars, they seem to act removed from the war as they so rarely come face to face with the people they kill. Although their job was seriously dangerous, how different was their military experience from that of the grunt in the trenches that ate from a dirty tin plate and had to charge and bayonet his opponent?

With his dashing young looks and rising kill rate, Richthofen quickly became a political and public hero to Germans as well as a notable enemy to the allied nations. After his 16th confirmed kill, Richthofen was awarded the Pour le Mérite (The Blue Max), the highest German military honor at the time. He had his plane painted red and soon gained nicknames, such as “The Red Devil.” Of course the one that stuck was “The Red Baron.”

Although Matthias Schweighofer portrays Richthofen with a sense of born arrogance, his portrayal could still be considered subtle. If you have ever met a military pilot you may agree that they are some of the most arrogant servicemen. Before you think I am offending them, let me add that an amount of arrogance is necessary to be a pilot. Someone unsure of himself is not going to be a successful combat pilot.

Richthofen is shown in the film as collecting parts of the planes he has shot down as trophies and mementos of his kills. In real life he also had silver cups made every time he shot a plane down. When silver became scarce, due to the war, he stopped having them made as he would not accept a lesser metal. He had a total of 60 silver cups made.

Some license was taken with this film. There was an actual nurse named Kate Otersdorf but his relationship with her was romanticized and exaggerated. Likewise, having Captain Roy Brown twice meet Richthofen face to face is completely fabricated.

Although the historical inaccuracies bothered many critics, there is another aspect to this film that concerned many people. German studios had no interest in making this movie. The film makers had to get individuals to invest in it. The reason was that the subject matter was too controversial. Apparently it is in bad taste in Germany to glorify any of its military history. While in Germany to film Valkyrie (2008), Schweighofer gave Tom Cruise a private prerelease viewing of The Red Baron. According to him, through Wikipedia, Cruise response was, “I'm amazed that you made a film like this in Germany.” So concerned with how Germans may react to it, the film makers chose to film it in English, hoping it would find an international audience.

Whether or not there are still hard feelings, or guilt, over Germany’s history of military aggression, there is no denying that they have many interesting stories to tell. Richthofen was a man who helped to inspire both his country as well as his enemies, granted for very different reasons. This film tries to show that he developed a change of heart about the war, but nothing in real life confirms that. The film makers failed greatly in that they should have stuck as much to the truth, no matter who it offended, and showed how an intelligent man fell under the very spell of glory that he himself helped to create.