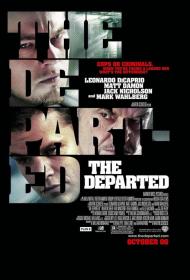 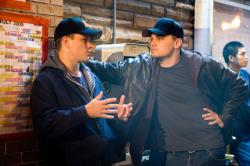 Matt Damon and Leonardo DiCaprio in The Departed.

I for one thought that The Aviator, Scorsese's last picture, deserved to be awarded the Best Picture of the year. It was something of a change of pace for Marty, but one that I thought he pulled off nicely. Now, with The Departed, maybe because of the ultimate reaction to The Aviator, Scorsese has returned to the mobster genre that he's famous for. While it might be ground that he's covered before, it's also ground that he handles like a pro, building a tense and taut thriller that grabs you and entertains you all the way through it.

About the only thing this Scorsese movie is missing is Robert De Niro. The lead is played by Marty's new leading man, Leonardo DiCaprio, with whom he's now made three movies in a row. But De Niro could have played the part that Nicholson plays, that of Frank Costello, the Irish Mobster who runs the Boston Underworld. Leo plays Billy, a State Cop who goes deep undercover, pretending to work for Costello. What Billy doesn't know is that Costello has his own man working undercover with the Police. Damon, who finally gets to use his Boston accent again, plays Colin Sullivan, a Detective on Costello's payroll. As Billy worms his way deeper into Costello's operations, it becomes a race to see who can figure out the identity of who first.

As you'd expect from a Scorsese film, The Departed is both long and violent, although I don't mean that it's long in a bad way. Although it could have been trimmed a little bit, the movie never really drags, as the suspense builds to the final confrontation. The only parts that maybe could have been trimmed are the scenes with the female psychiatrist with whom both Billy and Colin have an affair. As for the violence, if you have a problem with that, you probably shouldn't be seeing a Scorsese movie anyway.

DiCaprio always surprises me. When I see or hear about him in between movies I tend to dismiss him as a pretty boy who likes to party too much. This always makes me forget just how good an actor he is, as he proves here yet again. His Billy is intense and a little unstable, and you root for him all the way. Damon, who has now left his old friend Ben Affleck so far behind, that he's only a distant figure in the rear view mirror, also does an excellent job as the slimy bad cop that you just can't wait to see get his comeuppance (if he does, that is). As for Nicholson, this is the kind of larger than life role that he eats up for breakfast. Even Mark Wahlberg, whom you might think is the odd man out in this distinguished company, does a great job as the tough cop who doesn't take shit from anyone.

While it's doubtful that this movie will win any awards, who cares? This is an intense and entertaining mobster movie by the master of the genre that comes with a sting in its tail that will keep you guessing right up until the end. 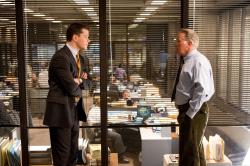 Matt Damon and Martin Sheen in The Departed.

Yeah, I was "blown away" by the ending. It does not turn out as you might think. That works, in the sense that it surprises you. It does not work in that it leaves you feeling empty afterwards. As Scott wrote, it is a long movie and after you invest so much time into the characters you expect a little reward for them as well as yourself. Again, the ending will surprise you but it may not be satisfying for you.

Although I do not see best picture awards here, I do see some possible acting ones. Nicholson is awesome as usual. This is his stock and trade character that has defined the latter half of his career. That of the foul mouthed, larger than life A-Type personality that we love to see him play; As Good as It Gets and About Schmidt be damned. DiCaprio is intense as usual and Damon continues to impress.

The direction is everything you think it should be, although the shot of the rat on the railing at the end is a little too obvious. The best thing that Scorsese does with the plot is to show the stress and strain lying causes. Damon can't get it up and DiCaprio has to take medication to calm his nerves. These may be larger than life characters but they are also very human.

The story keeps surprising you but the big mistake that one character makes seems almost too obvious. He has been living a lie for years then just happens to leave something out in the open at the wrong time? The Departed is about betrayal and loyalty. Almost no one in this movie is honest or loyal to anyone else. That makes for some great intrigue, but it leaves you damn few characters to root for. 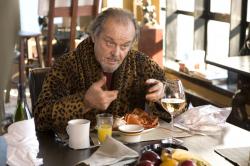 Jack Nicholson in The Departed.

Most gangster pictures are set in New York, LA, Chicago, Miami or Vegas. Setting this one in Boston was a good idea. Since Boston is not usually associated with organized crime it makes the storyline seem somehow fresher. Plus it calls for an entirely different accent, Boston-Irish rather than Brooklyn-Italian.

I really hope Marty wins the Oscar this year. It looks like a pretty sure thing but you just never know. The same thing was said about his last two pictures. Perhaps third time for him with Leo will be a charm. Or it could be third time charm in another way. Loosely based on the lives of gangster Whitey Bulger and corrupt FBI agent John Connolly, The Departed follows Goodfellas and Casino as one of Scorsese's greatest gangster pictures.

One sign of a good gangster picture is when it makes you care about unsympathetic or even downright ruthless characters. From Cagney's Tom Powers in The Public Enemy to Pacino's Michael Corleone in The Godfather movies this has been true. To that list add Damon's Colin Sullivan. He is the emotional center of the movie even though he is a bad guy. We are shown scenes from his childhood but are only told about DiCaprio's past. I disagree with Eric that this movie lacks someone to root for.

As for Nicholson he still has his presence and acting chops. His Frank Costello is an iconic character. He is one sick fuck. He reminds me of another great Cagney role, Cody - Made it Ma. Top of the world! - Jarrett from White Heat. Both are charismatic psychotics with a relationship fixation. Cody had a mother complex, while Frank fancy's himself Colin's father and a very strict father at that.

The Departed belongs in every movie buffs collection.