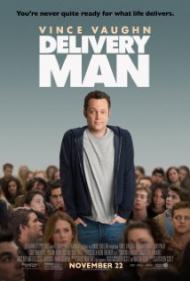 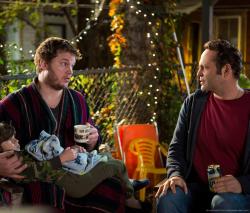 Chris Pratt and Vince Vaugh in The Delivery Man

Ken Scott directed and co-wrote the Canadian film Starbuck (2011). It was a hit in French speaking countries and so a near word for translated word English remake was clearly in order, with Ken Scott once again directing. The Delivery Man is an attempt at a feel good family film with a serious presentation of what constitutes a father. I would like to say that it completely succeeds but that would almost be about as honest as a man calling himself a father just because he once had an ejaculation.

One day he finds out his sperm was used to sire 533 children, a third of which have filed a class action lawsuit against “Starbuck” to force him to reveal his identity so they may meet him. David seeks advice from a lawyer friend who is also a single father of four, played by a scene stealing Chris Pratt. Against his advice, David anonymously seeks out some of his 20 year old biological children and ends up helping a few of them out.

These are some of the films better moments. Each scene is an emotional adventure as David meets a young person who is unknowingly meeting their “father” for the first time. His interaction with them is interesting to behold as he has to find ways to get near someone who has no idea who he is. Some he helps, while others he encourages and still others he merely spends time with. He tries to be their, “guardian angel” In his group of children we find every ethnicity and sexual preference. Just why these 20 year olds want to meet David so badly and where their real parents are, is never delved into.

Although a comedy, the sentimental aspect provides some nice moments. As the film moves on we learn more of David’s family and just why his girlfriend loves him. Although a middle aged man with no prospects, David is so amiable that everyone finds themselves drawn to him. I did not laugh as much as I hoped, and I did not buy all of his relationships, but I did start to like David more than I expected to. His intentions are always in the right place even if his follow through is not always thorough. The old saying, “The road to hell is paved with good intentions.” applies to David.

David is a man who, at a glance, seems to be an extremely selfish person but turns out to be anything but. Vaughn starts the film as if he is a collection of every character he has ever played. Then some nice little dramatic moments slip in and Vaughn does something I have rarely ever seen him do in a movie, he acts. His dramatic moments are better than his comedic ones, leaving an overweight Chris Pratt to provide the comic relief. His scenes with his four children are parental gold.

The script is often too pat and cute but it is a feel good film after all. I wish it had cut the number of offspring down so David could have spent more time with each of them. All we ever learn of most of them is that they want to meet him for whatever reason. As a father, I salute Ken Scott for defining fatherhood by the time we spend with our children and not the time we spent making them. A few more scenes of David giving them advice, encouragement and guidance would have helped. Like the movie, Ken Scott’s heart was in the right place, even if his intentions outweighed his follow through. 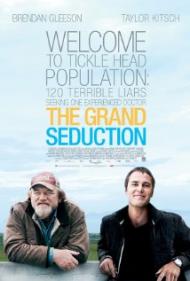