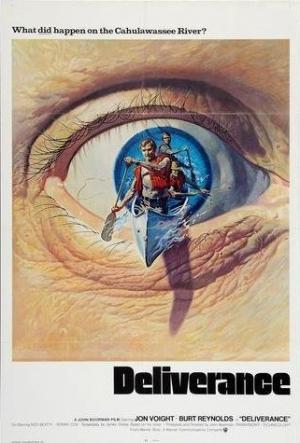 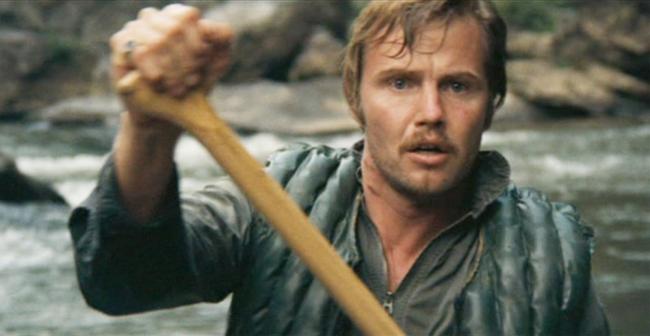 Deliverance was a landmark film and still resonates today. It displayed a taboo subject that still causes a reaction some fifty years later. Although that is what this film is often remembered for and gets the most talked about, this movie has more than just that to offer.

Lewis (Burt Reynolds) is the alpha male in a group of four men spending a weekend canoeing the Cahulawassee River in some remote Appalachian mountains. The river is about to be damned into one huge lake, making this the last chance anyone will have to journey down it. With him is his good friend Ed, who lives a stable life with his wife and child but still enjoys his time away with Lewis. Early on, Lewis asks Ed, "Why do you go on these trips with me?" To which Ed smiles a little and answers, "You know, sometimes I wonder about that." Ed has brought along a couple of other friends, Bobby and Drew.

The film starts like a salute to the great outdoors. We get plenty of country scenery and when they seem not to be able to find the river, Reynolds states, "Sometimes you have to lose yourself 'fore you can find anything." The four meet some honest and true hillbillies who mostly look like inbred poverty stricken ignoramuses. This scene features the famous banjo duel between Drew and an apparently mute country boy. After putting their two canoes in the river and heading down stream, they go under a bridge where the boy stares at them in a very ominous way.

The four men seem to be having an exciting time going down rapids and fishing for their dinner. Lewis gets the feeling they are being watched as they camp for the night. Nothing happens until the next day when Ed and Bobby, in one canoe, get ahead of Lewis and Drew in the other. They pull ashore to wait for them but end up running into two men carrying a gun and a knife. They act quite hostile towards the city boys with Ed guessing it is due to them having an illegal distillery somewhere near by.

This is the rape scene that features the well known lines, "He got a real pretty mouth ain't he?" and  "I bet you can squeal like a pig." Lewis and Drew show up after Bobby has been anally raped and Ed is about to taste dick. Lewis kills one of the men while the other runs off.

This begins an argument of what to do with the body and whether or not to tell the authorities. Each man has his own idea with the debate and guilt taking a toll. The men, now overly stressed, continue on their journey but the other redneck is still armed and looking for them. The rest of the trip is as stressed as any has ever been. None of the four men come out of this unscathed. It is up to the viewer to decide if these guys did the right thing or not.

Deliverance is an exciting and tense film. Reynolds gives one of his better performances while Voight slowly takes over the film as Ed comes into his own. The scenery is at once calming and then suddenly very creepy. These men change right in front of our eyes as they are challenged by the river, the rapists and each other. Sure, that one scene is memorable because male on male rape had not been so graphically shown in a movie before, if at all, but this is truly a great film beyond just that. 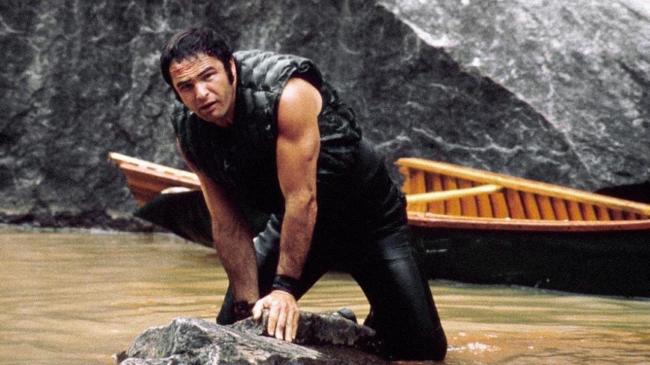 This movie was based on the bestselling book by James Dickey, an author and poet who spent ten years writing Deliverance – his first novel. Dickey adapted the screenplay (along with director John Boorman) but the story, and much of the dialogue, comes directly from the pages of his book. The “squeal like a pig” line being the most notable exception.

This line actually came about because Boorman wanted a “clean” version that could be aired on television. The original dialogue contained too much swearing and would be edited to death by the networks. This is that rare example where censorship actually resulted in a better product. Squeal like a pig is much more ominous and memorably creepy than any swearing could have been in that scene.

Deliverance takes the viewer along for the ride with these four men. It's a trial by fire (or water) and we're right alongside them with every paddle of the canoe. I hadn't seen it in quite a few years but it remains as intense an experience as it was the first time I saw it. This time it reminded me of The Revenant, which also takes the viewer on a visceral -and metaphysical- journey with the protagonist.

This is the movie that put Burt Reynolds on the map after years of being on the cusp of stardom. Within a few short years he would climb to the top of the box office heap and remain there into the early 1980s. As a young actor he was constantly being compared to Marlon Brando and in this role you can see the resemblance. He didn't really become “Burt Reynolds” until he grew the mustache.

As Eric wrote, however, this movie belongs to Jon Voight (and Ned Beatty). Voight's character has the greatest story arc. He discovers his inner survivalist and realizes -to his own horror perhaps- that he can be as ruthless and deadly as the next hillbilly.

The fact that these guys did all of their own stunts -without insurance- is remarkable. Reynolds really went down those rapids as he lay in the bottom of that canoe and Voight really climbed that cliff! 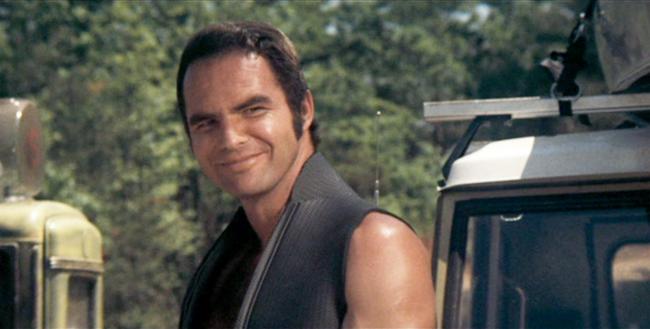 The only two things I knew about this movie before watching it for the first time were the two famous things Eric mentioned. The dueling banjos (although, despite the name, it's really a guitar vs a banjo) and, of course, the infamous rape scene. Although, as my brothers wrote, there's more to this movie than just those two scenes, those are the most unique things about it. The rest of the movie is entertaining enough, but without those moments, I doubt it would be remembered as much as it is today.

The plot reminded me of a famous line of Sherlock Holmes as written by Sir Arthur Conan Doyle.  He said, "It is my belief, Watson, founded upon my experience, that the lowest and vilest alleys in London do not present a more dreadful record of sin than does the smiling and beautiful countryside....Think of the deeds of hellish cruelty, the hidden wickedness which may go on, year in, year out, in such places, and none the wiser." His point being that in the city, there is almost always someone to hear you scream and authorities within easy reach, where here, as these four men learn, you are quite literally on your own.

It's easy to see why this movie made Reynolds a star. He has more energy and charisma than all three of the other leads combined. When his character is incapacitated in the final act, his presence is missed. Jon Voight's character has the biggest arc, but I was unimpressed by his performance. Neither of the other two characters are fully developed. Drew, played by Ronny Cox, has the least satisfying development. His reaction to the group's decision about what to do with the corpse seems overly dramatic.

One of the most shocking things about the rape scene is the way that it is filmed and treated so matter-of-factly. It's not shot in a graphically explicit manner (by which I basically mean, you never see a penis), but is in no way ambiguous about what is happening. The shock is greater because male on male rape is so rare in films and even rarer is it shown so openly.

The fact that the actors performed most of their own stunts is impressive. However, Voight climbing that cliff on his own would have been even more impressive if they hadn't shot it as a "day for night", meaning that although it was filmed in daylight, they tried to make it look like night in post production. It was a common enough practice in older films, but had mostly died out by the 1970s with more sophisticated cameras that allowed filming in lower light. Here, while the colors and brightness have been subdued, the picture is so washed out overall that it becomes annoyingly obvious, particularly every time water is shown in the background. If they couldn't afford to shoot this scene properly at night, they should have just rewritten it to take place during the day.

It's rather ironic that one effect of this movie was to promote white water canoeing down the Chattooga River in Georgia, which is where this was filmed. The damming was just a fictitious plot device. Rather than being scared away by toothless hillbilly rapists, the public flocked to the river and it remains a booming tourist area to this day.

This tale of survival does have more to offer than just those two scenes, but they'll always be why it is remembered.