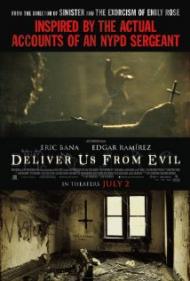 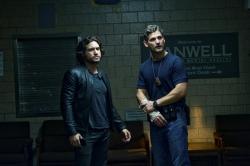 Édgar Ramírez and Eric Bana in Deliver Us from Evil.

Deliver Us from Evil is based on a 2001 book called Beware the Night. It was written by retired NYPD police officer Ralph Sarchie and it is supposedly based on actual cases he worked in a South Bronx precinct back in the 1980s and 90s. For the movie the story was updated to the current decade, and rather than several different cases, it focuses on one particular case of demonic possession. However much of the story is true, Deliver Us from Evil makes for a fairly entertaining crime/horror film.

It begins in Iraq in 2010. Three American soldiers stumble across a mysterious cave-like tunnel that leads to an underground temple of sorts. There is some sort of writing on one of the walls. The soldiers hear a menacing sound as the screen goes suddenly black. Next the story jumps to New York City in the spring of 2013. Sarchie (Bana), a cop with anger issues, and his tough-as-nails, knife wielding partner Butler (McHale) get involved with several strange cases that all seem to involve the supernatural. Eventually the stories connect and we learn the fate of the three soldiers from the opening scene.

Part detective story and part horror show, Deliver Us from Evil isn't a slasher movie or a CGI'd to the hilt demonic possession story. For one thing it's more creepy than gory. There are several jump-out-of-your-seat moments and some disturbing images but compared to most modern horror films it is fairly low key in the blood and guts department. It strives for a level of realism, and the supernatural events depicted in it stay mostly within the realm of plausibility.

One of the best sequences takes place at the Bronx Zoo at night. I won't give away the details but it is a well-filmed and quite eerie scene involving the lions' den. Again the scares are more of the kind that make the little hairs on the back of your neck stand up. There is a strong thread of foreboding menace running through the entire film. Even the exorcism at the film's climax doesn't go too far.

There are a few moments of levity thrown in to offset the somber tone of the story. These mostly involve Sarchie's young daughter and her new stuffed toy. Although McHale and several supporting officers get a few funny wisecracks in too. I've never thought much of Eric Bana as an actor but he has improved considerably in recent years. He continues to develop his acting chops with this role. He doesn't have to stretch much but he carries the movie with professional ease.

On the down side, the story lacks originality. It is all a bit paint by numbers. The characters are all familiar stereotypes, especially the priest played by Édgar Ramírez. You know the type. He's a sinner who drinks and smokes but maintains a strong faith in God. And they should have stayed with the book's title. Beware the Night is more unique sounding than the generic, Deliver Us from Evil. Its lack of originality is partly made up for by the solid work of the cast and the taut direction by Scott Derrickson. Still, the fact that we've seen it all before conjures up the fading scent of day old bread.

Eric Bana and Joel McHale in Deliver Us from Evil.

Given that I'm not a fan of horror films, particularly ones that claim to be based on a true story, the fact that I enjoyed this one as much as I did, must say something good about it. It manages to create a creepy mood and sustain that mood throughout its length while throwing in a few actual scares. As Patrick wrote, it's not particularly original, nor memorable for that matter, but for the most part it succeeds anyway.

Although the studio wants to play up the fact that the plot is based on an actual account by a real NYPD officer, that's purely a marketing ploy. A brief bout of research shows that the plot and personality of Sarchie are very different from the source material. In real life Sarchie was interested in the paranormal from a very young age, reportedly from the age of 12 when he first watched The Exorcist. He was never the skeptic that's he portrayed to be here, working freelance as a so-called Demonologist at night while working on the police force during the day. In any case, whatever Sarchie experienced or wrote about has little to do with the finished film.

Patrick felt that Bana has improved as an actor, but I still don't find him anything special. Mark Wahlberg was originally cast in the part, but eventually dropped out. Bana looks the part, but his accent slips, sounding more like a Boston accent than New York one at times. Joel McHale is surprisingly good and buffed up. He provides the film's few lighter moments, but unfortunately he's playing the partner of the hero in a horror movie and if Hollywood has taught us anything over the years, it's that this isn't a safe job to have.

Much of the film takes place at night and often while its raining. This and the run down buildings of the South Bronx play a big part in creating and sustaining the creepy mood. Sarchie and his partner spend a lot of time creeping down dark hallways with flickering flashlights. It's a credit to the cast and filmmakers that each of these scenes keeps you on the edge of your seat. Even knowing that each of them is set up for something to jump out at you, it's remarkably successful at still scaring you anyway.

Films about possession are a subgenre all their own and while this one doesn't really add anything new, it manages to provide enough thrills to make it worth watching at least once. 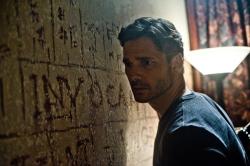 Eric Bana wishing he read Latin in Deliver us from Evil

Deliver Us from Evil is definitely worth watching, especially when you compare it to other possession movies that are supposedly “based on true stories” such as The Exorcism of Emily Rose (2005) and The Rite (2012). This film has more action and an actual sense of urgency. It seems to be sponsored by Major League Baseball as every other scene seems to feature a New York Yankees logo or a Boston Red Sox hat worn by McHale. As a priest and a catholic police officer are the films heroes, we may as well include the Papacy as a possible benefactor.

I agree with Patrick that the best sequence takes place at the Bronx Zoo at night. It is one of the scarier scenes and it also includes the one moment that had me laughing out loud. As they walk by animal enclosures, McHale says to Bana that the zoo at night is very creepy. Bana immediately says, with all seriousness, “Let’s split up.” Hasn’t this guy ever watched a single episode of Scooby Doo?

McHale is known for his comedic work on televisions "Talk Soup" and "Community" but does a decent job stretching a bit here. Bana likewise started his career in Australian television comedies, doing comedy sketch shows and impersonations. With his masculine good looks, the 6’ 2” actor found himself cast in more action roles than comedic ones. As far as his performance here goes, I found it decent enough but nothing in the least bit impressive, doing just enough of what was required. I get the impression that Bana takes roles more for the paycheck than any actual personal interest in the project.

I have had my eye on Olivia Munn ever since my son introduced me to her through "Attack of the Show" years ago. She is hot and an adequate actress but she makes one horrible misstep in the movie. When released from the locked storage unit with her daughter, she runs out and into her husband’s arms leaving her daughter behind her. No parent in that situation would do such a thing, ever.

Deliver Us from Evil does what you expect it to. There are a few frights and some tension. The atmosphere is suitably haunting. As Scott wrote, most scenes take place at night and often in the rain, cueing the audience into some impending horror. Sure, there is not much originality going on here but it is a worthwhile watch if such subjects interest you.