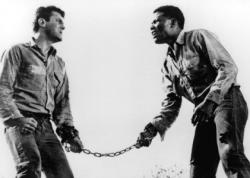 Tony Curtis and Sidney Poitier in The Defiant Ones.

Director Stanley Kramer's The Defiant Ones tells the story of two men (one black and one white) who escape - shackled together at the wrist - from a Southern chain gang. Sidney Poitier is Noah Cullen and Tony Curtis is John 'Joker' Jackson. While these two characters are the heroes of the movie, and they do both illicit sympathy from the audience, at no time are they portrayed as innocent men. They are both convicts guilty of a crime.

At first there is an unbridled hatred between the two men. Soon, however, they realize that it's going to take much cooperation and teamwork if they are going to survive and keep from being caught.  In one scene they jump into a drainage ditch to avoid being seen. It's a deep ditch and it's pouring rain. At first they both try scrambling up the sides, but quickly realize that John will have to stand on Noah's shoulders in order to make it to the top.

The main drama of the movie deals with their relationship as it progresses from animosity to tolerance, friendship, loyalty and finally to a brotherly love. Along the way they have several close calls. Once, while trying to break into a store in order to get some tools to break their chains, they get captured by some local small town men, only to be freed by a sympathetic former chain gang prisoner (Lon Chaney Jr.). Later they cross paths with a lonely woman and her young son. She has the hots for John and they make plans to get away in her automobile. That is until John learns she has doublecrossed Noah by giving him false directions through a dangerous swamp. This leads to the emotionally riveting finale.

In my opinion Sidney Poitier does some of the best acting of his career in The Defiant Ones. Too often in his movies he seems to be holding back. But here he gets to explode with rage. As he tells his white companion, "I ain't gettin' mad, Joker. I been mad all my natural life." Tony Curtis, for his part, holds his own with Poitier. He even manages to do a passable Southern redneck accent.

There is a subplot that deals with the differences in style between a local sheriff and a State Police Captain. But their good cop/bad cop routine never equals the story going on between the two stars and at times seems to distract from it.

There is much physical contact between these two handsome leading men. Intentional or not this gives a subtle homoerotic flavor to the movie. In one scene they are sleeping and Tony Curtis is resting his head on Sidney Poitier's chest. They wake up and quickly jerk apart from each other.  And in the famous last scene they are once again physically close, but this time it's by choice.

The Defiant Ones remains a powerful movie about race relations and intimate relationships between men. 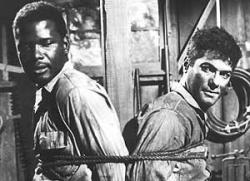 Sidney Poitier and Tony Curtis in The Defiant Ones.

Patrick I agree that this is a good movie, but I think you oversell a couple of points.

I think the homoerotic moments are all in your head. The scene where Cullen wakes up with his head on Jackson's chest and they both pull away has nothing to do with sex. It's only because of how they've been fighting like cats and dogs up until that point. And the final scene is more about them finally seeing each other as men instead of enemies. Any sexual tension was just wishful thinking on your part.

The other thing I disagree with you about is the stages of their relationship. What makes this movie so great is that neither one of the men changes too much. I don't believe they do go through friendship and then brotherly love and the movie is the better for it. They do learn, or more specifically, Jackson learns, to think of Cullen as a fellow man. There aren't any over the top epiphanies, but rather just a series of events where Jackson sees the world for a brief moment through Cullen's eyes. I'm not even sure I would call them friends by the end of the movie, but because of their shared experience they have bonded in a very personal way.

I've always though Sidney Poitier was an overrated actor. He was important in Hollywood in the same way that Jackie Robinson was important in baseball, but strictly as a performer I've always considered him a bit wooden. I concur with you though Patrick that in this movie he delivers a great performance. Whether it was a the role, the director, or the script, I don't know, but he has a spark here that's missing in the other performances of his that I've seen.

Patrick, you dismiss the the role of the local sheriff, and it's true that he's not the heart of the story. However, I was relieved to see that for once the southern sheriff wasn't a racist good ole boy. He's actually the most sympathetic of the lawmen. This angle of the story reminded me of Tommy Lee Jones in the '90s remake of The Fugitive.

You can see how the Production Code was beginning to lose its power by the time this movie was released. Clearly Jackson has sex with the woman in the farmhouse. When the sheriff and his men arrive the next morning, they ask her if the fugitives took anything, to which she replies knowingly, "Nothing you could arrest them for."

The reason The Defiant Ones remains a powerful movie is because of the restraint the filmmakers used in showing the developing relationship between these two characters. There are no big speeches or blatant moments of redemption. Cullen isn't shown to be a misunderstood saint or an innocent man. It's just two men thrown together in a life threatening situation who learn to depend on each other despite having different colored skin.

Sidney Poitier and Tony Curtis in The Defiant Ones

The Defiant Ones is a not so subtle social statement. When they spend the night in the swamp, eating bull frog, Joker says of the insects and animal noises, "Listen, there must be a million of em and not one understands what the other one is saying."  Cullen remarks, "Their just bugs."  But Joker continues, "Bugs or people, no one understands anybody."

Through their conversations they realize that they have much in common.  Joker has spent his life doing menial labor and getting pissed off by those who have more.  His "thank you" speech, speaks volumes.  Cullen likewise feels that life is against him.  He dislikes that his wife just wants him to get along, while he is fed up feeling like a second class citizen.  Both men are from a similar economic class.  It is only their skin color that makes them at all different.  Note the sheriff does not differentiate between the two when he says, "I am beginning to hate those two men."

Cullen and Joker start to see each other as equals, but then a women comes between them.  This high class broad sleeps with a convict the same day she meets him.  She quickly decides to ditch her son at a relatives and run off with him.  She cries over Joker as if she is madly in love with him, and she is clearly mad.  Joker ends up seeing her as a possessive psycho and leaves after Cullen.  Bros before hos, and she was one mental ho.