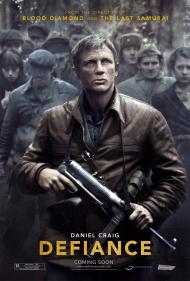 Craig and Schreiber act well together, despite not really looking like brothers.

Ah, the Nazis. What would Hollywood have done without them all these years? To paraphrase Hitler himself, if the Nazis hadn't existed, Hollywood would have had to invent them. Even now, almost 90 years since the Nazi Party was formed, movies are still being made with them as the villians.

In Defiance, while the Nazis are rarely seen, they are the instigators of the plot and the, mostly, unseen enemy. As the movie opens in 1941, the Nazis are gathering up Jews in a section of Poland and murdering those who defy them, including members of the Bielski family. The surviving members, four brothers, flee to the woods where they set up camp. Slowly other Jews gather around them for security. The brothers make a deal with Soviet Partisans in the area to get further protection. In all they ended up saving over 1200 people from the Nazis.

This is certainly a departure from most movies about the Holocaust where there usually seems to be very little physical resistance from the Jewish community. Perhaps this is because most of the time those movies focus upon the middle to upper class Jewish families who weren't accustomed to having to fight or scrape by to survive. The Bielskis were farmers and, it is hinted, also involved in some not strictly legal activities.

Craig and Schreiber act well together, despite not really looking like brothers. Craig plays Tuvia, the leader of the Jewish refugees who is more interested in taking care of the survivors than in fighting the Nazis, although he does fight when pushed. Schreiber, as Zus, is motivated by the death of his wife and child to go on the attack. He eventually joins up directly with the Russians after a fight with Tuvia.

Perhaps the only problem with this movie is that it runs too long. It starts strong and ends with action, but for a large portion in the middle it's just the refugees trying to cope with the cold and the lack of food. At two-hours and twenty minutes, they could easily have trimmed twenty minutes off of it.

The movie gives a little info at the beginning and the end of the movie via some captions, setting up and explaining what happened to some characters. I assume that part of the movie is accurate, but the rest, while I'm sure the gist is true, is sometimes kind of Hollywood; particularly the ending where Zus does a Han Solo impression.

After so many years I thought they'd have pretty much exhausted original ideas from which to make a World War II movie. This movie certainly presents an angle I wasn't familiar with before and in an entertaining, if overly long, way.

Defiance does not run too long. It is not all action, as it is based on true events. When the movie ends the war is no where near over. I wanted to keep watching. Not only is this a fascinating World War II movie, but it is about a group of people creating their very own society. Everyone must turn their valuables over to the leaders, everyone works and everyone eats equal portions. These people escaped Fascism and Communism to live under Socialism.

After watching the movie, do yourself a favor and watch the extras on the DVD. The children of Tuvia and Zus talk about how their fathers and mothers told them stories over the years about what happened during the war. They talked about how strangers would come up to them in the street, or to their house, and tell them that they were among the saved Jews. The actual details of the battles may be manufactured for the movie, but the story of these brothers, as testified by their children, is true.

I am rather indifferent to Craig as an actor. He has received all kinds of praise for Bond, but it is the role, not the actor that makes that series work. How else can you explain Roger Moore. Schreiber stole every scene from Hugh Jackman in X-Men Origins, and he does the same here. His brooding, shoot first ask questions later Zus, is far more interesting than the indecisive Tuvia. Schreiber is also able to maintain his accent better. Several scenes has Craig talking to someone where one sentence is in a Russian accent and the next is British.