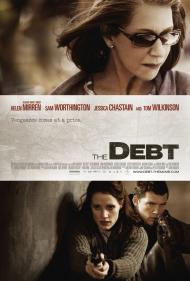 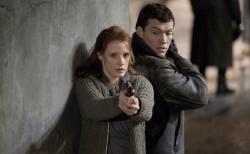 Jessica Chastain and Sam Worthington in The Debt.

I'm a fan of smartly done espionage films and The Debt looked to be exactly that, so when its release date was pushed back by almost a year I grew worried. The previews looked great, but usually a delay like that means bad things. Thankfully it was a legal issue that held up the release date rather than an artistic one and I'm pleased to say that The Debt was well worth the wait.

There are two stories told here. One is in the 1990s and one in the 1960s, featuring the same characters - played by different actors - in each time period. The story opens in Israel in the 1990s with the publication of a book that details a Mossad mission into East Berlin that ended with the death of a Nazi Doctor known as the Surgeon of Birkenau (reminiscent of Mengele). The mission was carried out by two men and one woman. Rachel (Mirren in the 90s, Chastain in the 60s), Stephan (Wilkinson in the 90s, Csokas in the 60s) and David (Hinds in the 90s, Worthington in the 60s).

The author of the book is the daughter of Rachel and Stephan. At the publication party, Rachel reads a passage out loud and the film flashes back to a key event of the mission and we see the official version. Later though we are shown what actually happened and we learn the official version isn't the true one and some truths won't stay hidden.

While the entire movie is great and the cast completely flawless, the absolute best parts of the movie are the flashbacks to the mission. The three young agents are forced to live together under stressful conditions and sexual chemistry between both men and Rachel soon interferes with the mission. Rachel is brought in because Doctor Vogel - whom they believe to be the Nazi  surgeon - is working as a gynecologist now. Rachel must visit him to ascertain his identity and to execute the planned kidnapping. She submits to a full gynecological exam and the creepiness, suspense and horror of submitting to putting her feet up in stirrups and allowing him to intimately examine her when she knows the things he has done, is one of the tensest moments in the film.

Although this was a three person mission, Rachel is the star. Mirren in the 90s, who must deal with the consequences of the past is as great as you'd expect her to be. Newcomer Jessica Chastain, who has burst on to the scene with three major roles this year (this film, The Help and The Tree of Life), matches her brilliantly. She is definitely on the top of my actresses to watch list.

Mirren is terrific and quite believable as a former agent who is forced to do one more job, at the film's climax, to settle the debt owed. She even handles a small amount of action. It is in this ending though that I have my one and only complaint and that is because it's a little vague. I wanted to see the final consequences of it all. It's not necessary and you can see what will happen, but I still wanted to see it through and when a movie leaves me wanting more rather than wishing they had cut something, I know it was good.

They may have waited a year to release this movie, but you shouldn't wait at all to go see it. In the dumping ground that is the end of summer, before the start of the prestige fall films, this one stands out like a diamond. 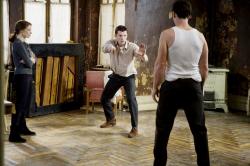 The young are full of energy and passion.

The Debt is not a unique film in and of itself, but compared to what has been released this summer, it is a refreshing watch.  It has the feel and look of a foreign film.  It also has the one thing missing from so many action films, tension.  I found myself caught up in both the action scenes and the love story.

The entire film has a sense of anxiety and unfulfilled happiness about it.  The scenes in 1965 are the more fascinating.  They are ripe with mystery and romantic possibilities.  Young Stephan is the veteran of the three.  He is the leader and has a slight "James Bond" air about him.  He has sex with Rachel to merely pass the time.  David is a much deeper character.  He finds himself attracted to Rachel, but is clearly inexperienced with the opposite sex.   The mission is a personal one for him as he lost his entire family in the holocaust.  The film never says how he survived it as a child while his family did not.

As Scott wrote, this is Rachel's story.  She is very much attracted to David and flirts with him to the point of wearing only a towel next to him after getting out of the shower.  They share a moment of almost letting go but David pulls away, allowing Stephan to move in and take care of business.   David stirred up her batter but Stephan baked her pie.

Thirty years later the truth of the mission comes back to haunt them, but so do the old pent up feelings.  Rachel made several life changing decisions in the story and they all lead her to the scene by the shore where she sits with her ex husband watching her daughter's family play in the sand.   If only she had not done this or decided instead to do that, but alas, fate is not to be denied.  She must take on one final assignment that may cost her the one thing she clings to, her daughter's respect and happiness.

Also like Scott, I was not happy with the ending.  It never states how the truth coming out will benefit anyone.  Sure, a lie can eat at your soul but allowing the truth in the story to come out would not benefit anyone, other than Rachel feeling the relief of letting it out.  Perhaps her guilt is her penance for the lie and the betrayal of David.  In fact, revealing the truth would outright hurt innocent people like Rachel's daughter and Dr Vogel's family if he had any.   Mossad would be looked down at by the rest of the world's intelligence agencies.  I wanted to root for Rachel at the end of the film  but expunging herself of the burden of a guilty conscience is a selfish act.

Even though I was not completely thrilled with the film's resolution it stayed consistent with the theme of unrequited happiness.   The Buddha said, "Life is suffering" and Rachel is miserable nearly the entire film.   She puts up a brave front when spreading her legs for the doctor or spreading her legs for Stephan wishing it were for David.  Her scar on her cheek nearly cracks open when she has to read a passage from her daughter's book.

Rachel is well played by both Mirren and Chastain, making her a very real person experiencing extraordinary events.  Their male counterparts have much less to do.  With so many great Israeli actors out there, I wonder why they cast people from all over the world except from Israel.  Worthington plays David very effectively with a quiet sensitivity but his accent slips occasionally.  A problem you would not have with an Israeli actor.

Although I am nit picking a few points, The Debt is a great watch for anyone looking for something with less special effects and more human drama than nearly anything else released so far this year.

Helen Mirren in The Debt.

The Debt features a great cast lead by the wonderful Helen Mirren. With this movie, and the recent Red, she proves an actress can handle action scenes well into her 60s and probably beyond. The three actors playing the young agents look and act believably similar to their older counterparts. It is an important detail that is necessary for the story to work. As my brothers said, Rachel is the central character of the story, and both Chastain and Mirren are superb portraying her.

One thing that makes The Debt unique is the fact that it is Rachel – and not the men – that gets the most intense action scenes. Both actresses, in fact, have a brutally realistic knock-down struggle with the evil former Nazi surgeon. It is this battle of wills, as well as brute strength and cunning, between Rachel and Vogel that lies at the heart of the story; while the male agents clearly play supporting roles.

Like Scott I found the scenes in the doctor’s examining room disturbing. They are intense, creepy and horrific to watch. I can’t think of a more vulnerable position for a woman to be in than when Rachel allows this sinister man to peer at her most private parts, while questioning her about intimate details of her life.

The love triangle aspect of the story adds a rich subtext. The relationship between the three agents is emotionally complex without slowing down the plot. I also enjoyed the way the past is revealed, with the official version of the events being shown first and the truth coming out much later in the movie. Having Rachel read an excerpt from her daughter’s book is a clever way to begin. It succinctly establishes the modern day characters and their current situations in life.

I concur about the ending. The notion of the truth coming out is overplayed. Yes it would cause a scandal and the press would have a field day but, as Eric said, it benefits no one. It only serves to assuage Rachel’s guilty conscious, while doing damage to many others. The inner struggle and ensuing bitterness of keeping the secret hidden is, in my opinion, a fair debt to pay for a lifetime of glory and fame.

The Debt, despite its less than satisfactory denouement, is a riveting action thriller/drama with a very talented cast.