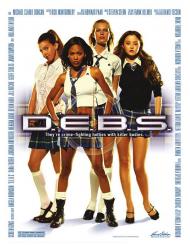 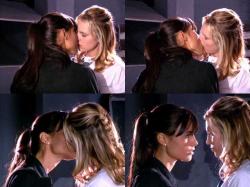 At first glance, D.E.B.S. might seem like a sexy, female version of Cody Banks. Its plot centers on a group of girls in extremely skimpy schoolgirl outfits who are in reality spies. However, D.E.B.S. is much more adult, far sillier, and infinitely better than you might expect from that brief description.

It seems that buried within the SAT that all college bound high school students take, is a secret test that measures a person's aptitude for spying. Those who score high (and apparently this is only ever very attractive women) are recruited into D.E.B.S., a top-secret spy agency. The D.E.B.S.' arch-nemesis is Lucy Diamond, an equally attractive super-villain who once tried to sink Australia. No D.E.B. has ever survived an encounter with her.

What the D.E.B.S. don't know is that Lucy is also a lesbian who recently went through a traumatic breakup and is looking to start dating again. When she goes to meet a female Russian assassin (who only performs hits to pay for her dance lessons) for a date, the D.E.B.S. mistake the meeting for a criminal rendezvous. After a gun battle at the restaurant, Amy (the only D.E.B. to ever get a perfect score on the secret test), runs into Lucy as she's trying to escape. There's an instant chemistry between them, even though until now Amy never realized she was gay. The race is soon on to see if the rest of the D.E.B.S. team can capture Lucy, before she captures Amy heart.

The jokes come fast and furious and are very silly. As the D.E.B.S. spy on Lucy's dinner rendezvous, they hang from swings that descend from the ceiling. Scattered around the ceiling of the restaurant are also the CIA, the FBI, and the NSA, so that there are more spies dangling around then there are diners. While hanging there, the ditzy member of the D.E.B.S.' team points out about Lucy that, "I have that same sweater. Only in taupe."

Each member of the D.E.B. team has her own unique personality. There's Amy; the model agent, Max; the leader, Janet; the ditzy one, and my favorite; Dominique; the French agent who constantly smokes, drinks black coffee, wears the shortest skirts, has sex, and speaks a combination of French and English. The last habit prompts Max to tell her, "Speak English or French. Franglish is not a language."

While the movie is funny, it lacks any real tension. Everyone is just too nice, including Lucy and her 'evil' henchmen Scud. The comedy works but the lack of real opposition undercuts the movie. If Lucy had been shown as a true villain instead of just a nice girl who happens to rob banks, then Amy's falling for her would have had greater impact.

An offbeat, but very funny movie, D.E.B.S. could even become a franchise if it finds its audience. 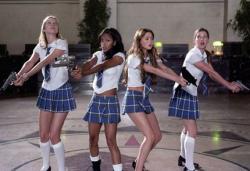 I did not think of Cody Banks so much as I did Charlies Angels: Full Throttle (2003) if Demi Moore and Cameron Diaz had become lesbian lovers.  Jordana Brewster even resembles Moore.  Like Charlies Angels, the entire gimmick of D.E.B.S. is watching beautiful women as action heroines.  Only here, the lesbian angle has been added.

As a farcical comedy, I was never able to get into it.  The girls were all obviously cast for their looks and not their comic timing.  This cast could barely qualify for a supporting role on a CW television show, let alone a film.  Only Aoki seems to be playing her part with the right amount of absurdity.

Only a few jokes worked for me, such as Lucy's dislike of Australia, but that should have been milked a little more.  The "After that." jokes were okay.

Amy: "What I said to you the first time we met?"
Max: "High-protein diets are overrated."
Amy: "After that."

The big selling point of the film is attractive girls in miniskirts, and a lesbian love affair between two hotties.  Sure, there are worse things to look at, but after an hour and a half, I wished I had watched something else.