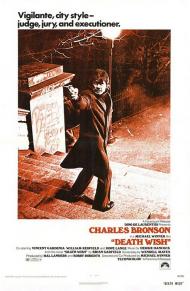 Death Wish is the ultimate revenge fantasy. Virtually a 90 minute advertisement for the NRA, it's the kind of movie that generally sparks a visceral reaction from its viewer; either in favor or against it. No matter what your view, it's hard to argue that moral judgment aside, this is an entertaining film.

Charles Bronson stars as Paul Kersey, a New York City architect in 1974. He's a self-described bleeding-heart liberal and family man. His life seems fairly idyllic until one day his wife is murdered and his daughter sexually assaulted by a group of muggers (including a very young Jeff Goldblum). His daughter is so traumatized by the incident (which is shown rather graphically) that she becomes comatose.

Following a trip out west, Paul returns to the city and decides to get his revenge for what happened to his family. Not revenge on the group who actually attacked his family (they're never seen again), but rather on the city itself which has produced their ilk. Paul then goes on a one man killing spree, stalking subway trains, dark alleys and parks, using himself as bait to draw criminals to him where he can murder them.

The fact that this movie was such a hit at the time of its release is partly because it was a product of its time. New York City in the 1970s was a very different place than it is today. The Bronx really was burning and the city faced bankruptcy. Crime was on the rise and white flight to the suburbs had been going on for years. To New Yorkers, seeing a middle class, tax paying citizen taking back the streets from the gangs and the muggers must have really struck a nerve. Sure, the city shown here is an exaggeration (Paul finds crime so easily that no city with so much could possibly continue to function) but it's close enough to reality to be believable.

Essentially the plot is that of a western moved to a 20th century city. The plot would be mundane had it featured John Wayne in Dodge City where a man strapping on a six-shooter to avenge a loved one was commonplace, at least according to Hollywood. It's only because of the setting that the plot seems shocking at all, or rather seemed shocking. It's since been imitated so many times that it's lost its edge.

The original 1974 New York Times review of Death Wish stated that, "...it's a despicable movie, one that raises complex questions in order to offer bigoted, frivolous, oversimplified answers." Clearly their critic was taking this movie too seriously. It's a fantasy, but obviously one that their liberal critic found distasteful. Although just why he refers to the movie as bigoted, leaves me scratching my head as the killers and many of the muggers who are shown being killed are white.

At under 90 minutes this is a fast paced and rather gripping film that it doesn't pay to over analyze. It's not serious enough to be taken seriously, but it can entertain you if you let it.

Recognize the mugger on the right? It's Denzel Washington making his movie debut in Death Wish.

Actually Scott, the majority of Kersey's victims are black, which is odd since, as Scott wrote, his wife's killers are white. They even mention it during a cocktail party scene. One guest brings up the fact that race seems to play a part in the vigilante's murderous rampage. A woman responds with this racist line, “That's because more muggers are black. Are you suggesting we should have more white muggers to achieve racial equality among muggers?” WTF?!

Charles Bronson was 52 years old when he made this movie. His weathered mug shows every year of it but he is incredibly fit for a guy on the shady side of 50. He brings a bit of depth to the role. The fact that Paul Kersey is a self-proclaimed liberal with no history of violence adds some complexity to what could have been a very one-dimensional part.

The entire cast is filled with familiar faces from the seventies as well as soon to be famous faces. Scott mentioned Jeff Goldblum (this was his movie debut) as one of the freaks that kills Hope Lange (while shouting, “Cunts! I kill rich cunts!”) but this was also the first movie Denzel Washington ever made. He was uncredited as one of the muggers in an alley. Lawrence Hilton-Jacobs, better known as Freddie 'Boom Boom' Washington on Welcome Back, Kotter, also plays a mugger. Christopher Guest and Olympia Dukakis both get a scene apiece as police officers, and Helen Martin of 227 fame plays the old lady that fights off two muggers (both of whom are black) with a hatpin.

As a time capsule of the crime ridden 1970s Death Wish is pretty hard to top. It also proved to be prescient of things to come. On December 22, 1984 Bernie Goetz notoriously shot four (alleged) muggers on a number 2 train in Manhattan; something that Paul Kersey did ten years earlier in this movie.

Death Wish was a big hit at the box office. It relaunched the career of Charles Bronson who would eventually return for four sequels. Viewed today it's incredibly dated but remains a compelling movie. 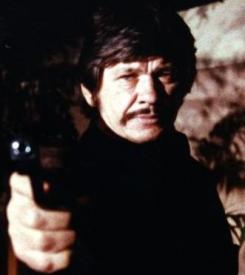 Scott wrote that it is not worth analyzing this film but I disagree. Movies are reflections of their time and place. In the 1970s, the Stock market was down and the welfare rate was up. Like Detroit after the turn of the 21st century, New York was broke. Crime soared as the economy tanked. People did not feel safe to walk the city and movies like Death Wish reflected that fear.

What is great about this film is that although it is a time capsule, it still relates to contemporary America. Permits for concealed handguns have been reported on the rise recently in many states. Some conservatives wrote that it has caused a drop in crime to bolster their view on guns, while liberal reporters ignore the subject until someone is killed so they can use the death to support their antigun rhetoric. Death Wish has a scene where it is suggested that muggings dropped in New York due to the gun totting vigilante killing criminals. Score one for the NRA.

As far as the racial makeup of the criminal element goes, I kept track and Scott is right. This movie shows 12 white guys committing a crime, from harassment to murder and 8 African Americans doing the same. There are also 2 men whom I could not tell what their ethnic makeup is. As far as the victims of Paul Kersey go, he is shown killing 5 white guys, 3 black guys and one of undetermined origin.

My brothers wrote that this is an entertaining and compelling film, but the only thing that made it compelling and entertaining to me was the social statement. Watching someone look for and murder people, even though they are criminals, is sadistic. I found no fun in that. I enjoyed Death Wish’s simple message that when people get scared they sometimes go to extreme measures to defend themselves. Look at the folks protesting the illegal aliens that our government allows to cross our southern borders. I also, of course, liked that a movie with a right wing message made a valid point. 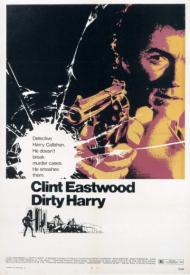