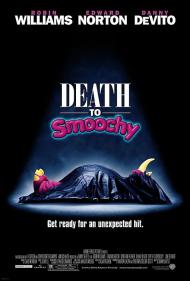 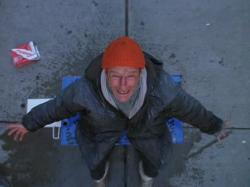 Robin Williams in Death to Smoochy.

The children's character Barney is such obvious fodder for a send up that you'd think it would have been done as a movie before now. Sure, it's been done in small ways, in 9 Months Hugh Grant and Tom Arnold get in a fist fight with a foul mouthed Barney clone to mention just one, but Death to Smoochy is the first full-length film to take on the purple dinosaur head-on. Yet oddly enough, they don't really poke much fun at him. Instead, the fluffy character, in this case, Smoochy the Rhino, and his alter-ego Sheldon Mopes, is portrayed as an idealistic character who just happens to be in over his head in the cut-throat world of children's television. Perhaps the makers of this film discovered what the comedy group Monty Python discovered when they made The Life of Brian, when you boil away all the sickly sweetness of the message of either Jesus or Barney, what they're saying are basically good things. In any case, the obvious gags and jokes are missing from this movie.

Instead we are presented with the story of Rainbow Randolph (Robin Williams), a children's show host on the take. For a couple of thousand dollars, he'll guarantee that your child will be featured front and center on his show. Nor is he against taking a few kick-backs when appearing at Ice Shows which are really backed by the mob masquerading as a charity. Sadly, at least for Randolph, his gravy train is derailed during a sting operation and he is disgraced and fired. In an effort to reclaim their image, KidNet, the network showing Randolph's show, opts for a 'squeaky clean' performer to replace him. Enter Sheldon Mopes (Edward Norton), who's character of Smoochy is so disgustingly squeaky clean that the network laps him up.

His love/peace/vegetarianistic/anti-merchandising views soon clash with those of the network however and soon Smoochy is smooching it up with Danny Devito's character, which is that of a sleazy agent who has fingers in pies and a whole lot of power. He soon negotiates an executive producing credit for Sheldon, guaranteeing him control of Smoochy and the whole show. Of course Danny wants something in return, which in this case means appearing in an Ice Show in which Danny has a percentage in the profits. When Sheldon won't play ball, it's decided it's time for Smoochy the Rhino to become extinct. This plan fits in nicely with Rainbow Randolph's plan, who is convinced that if he can just get Smoochy fired or dead, than he will be asked to return to his old show and time slot. Things are further complicated when Sheldon befriends the son of another mobster who insists that he be allowed to appear on the show. And what we end up with is two competing mobs facing off with Smoochy in the middle and Rainbow Randolph floating around on the outskirts trying to kill Smoochy and regain his dignity. And the whole thing comes to a climax at the much aforementioned ice show.

The plot does roll along nicely and does contain some very funny moments, but at times seems to lack a general cohesiveness. Robin Williams' part of the movie, while containing the funniest moments, really doesn't affect the plot, at least not until the very end, and even this seems contrived, as if the writers didn't really know how to resolve his situation. So there is almost two stories going on here at once, and it's not always a benefit. You can't help but feel that if a lesser known actor had been playing Randolph, he would have appeared on screen much less than he does with Robin Williams playing him.

Which is sort of a contradiction on my part, or rather, a catch 22, since Williams provides the most laughs, but also damages the flow of the story the most. Of course this is only true if you're a fan of Williams's frenetic humor. If you find him annoying as some do, then you'll want to avoid this movie at all costs, because this is Williams at his most Williamsy.

Edward Norton is good as the strangely sweet young man playing a Rhino. Although his do-gooder character seems to contradict itself when he easily befriends gangsters and killers when they can be of assistance to himself.

Danny Devito is, well let's face it, there's only character that DeVito can play, and in this movie he plays it as well as always. Which is the slimy little guy he started with in Taxi and will probably finish with in whatever his last movie is. I guess give the guy credit for playing to his strengths.

All in all, a funny movie which needed a tighter edit and little more humor, to be even better. 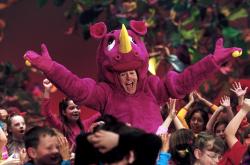 Edward Norton in Death to Smoochy.

Death To Smoochy breaks the cardinal rule of story telling. It has no character to root for. Without someone on screen to like, this movie becomes painful to even watch.

Robin Williams plays a man who loses his job hosting a kids television show as Rainbow Randolph. He was taking money from parents to guarantee their place on his show. He gets caught and fired. Enter Smoochy the singing Rhino. He takes Rainbow's time slot and his show become a big hit.

Rainbow, now homeless, gets pissy jealous and vows revenge. We are supposed to feel sorry for him as we constantly see him down and out. Hey, he is paying for his crime. If anything he should be locked away. At one point he tries to set himself on fire in the middle of Time Square.

Smoochy, played by Ed Norton, is a health food eating, politically correct bore. He is not in it for the money, he just wants to help the kids. Yeah right! He takes the penthouse as soon as it is offered. Jumps the producers bones as soon as she gives it up. He does sing a slightly amusing song about step dads. The chorus is "he's just adjusting."

This film is full of swearing and the word fuck is heard more often than it isn't. Perhaps this is supposed to be in contradiction to Smoochy's holier than thou image, but it just comes off as immature. However, I did laugh at a couple of good lines. At a funeral this Irish mob lady says to her goons as they are viewing the body "Lets go pray then get shit faced." After Rainbow gets in a fight he is asked if he is okay, to which he replies, "I'm kind of fucked up in general so its hard to gauge."

Danny DeVito's direction is uneven in this movie. He has some good transitional shots from one scene to another. Then he has these huge annoying close ups where all you see are some one's eyes or mouth.

Ed Norton's Smoochy is supposed to be the good guy center of this movie. He was so self righteously annoying I wished he had received the revenge that was intended upon him. Without someone to like in this movie I lost most of my interest in it.

Robin Williams and Edward Norton in Death to Smoochy.

If a movie is funny enough, the characters needn't be likable. Nearly the entire population of It's a Mad, Mad, Mad, Mad, World is unlikable but that's still a great comedy. Death to Smoochy is funny enough. And I did find myself rooting for Sheldon (I even had a soft spot for Randolph by the end). The immensely talented cast creates a surprisingly witty, and very ribald, send-up of children's television. A world whose nauseatingly sweet surface hides its sour underbelly.

Enter Smoochy the Rhino, preaching -among other things- the benefits of a gluten-free diet, years before it became trendy. Edward Norton is brilliant in the role. I'm glad he's a little smug and self righteous. It gives the character an edge. Ditto Robin Williams. He does his usual rapid-fire, stream-of-consciousness shtick in the guise of Rainbow Randolph. He may be an alcoholic loser with delusions of grandeur but he's also funny as hell.

I cracked up when he trashed his room while screaming his hatred for Smoochy, “I loathe you! Bastard Son of Barney! Die! Die, you stuffed son of fluff! You illegitimate Teletubby! Die, you Muppet from hell! Die, you foam motherfucker!” Williams has the most overtly funny part but the jokes are sprinkled around to the entire cast. For example, when the brain damaged, ex-fighter (Rispoli) spots Sheldon and yells across the crowded restaurant, “Okay, I'm gonna go take a dump!”

The script is filled with smart banter and quirky dialogue spoken by memorable characters. The politically correct Sheldon describes his childhood like this, “When my brothers and I played cowboys and Indians, I was always the Chinese railroad worker.” When the heroin addicted former television host played by Vincent Schiavelli falls to his death, he calmly laments, “I never saw Venice.” Danny DeVito, as Burke the slimy agent, tells his client, “Sheldon, I know you got a fetish for ethics.”

DeVito had already proven his deft comedic touch as a director with Throw Momma from the Train (1987) and The War of the Roses (1989). After a thirteen year absence he got back behind the camera for this movie. I never found his directing to be annoying. My favorite directed scene takes place in Times Square. An insanely despondent Rainbow Randolph is preparing to light himself on fire in front of a crowd filled with children. One little girl approaches him and tries to comfort him. Suddenly a voice calls out excitedly from the crowd, “Smoochy the Rhino!” Immediately everyone on the street, including the little girl, deserts Randolph and makes a mad dash towards Smoochy.

Death to Smoochy flopped at the box office and received mostly negative reviews (see above). It has since developed a cult following and deservedly so. It's a movie that will continue to improve with age as a sharply barbed satire of the bizarre world of children's television at the turn of the millennium.