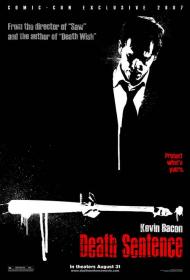 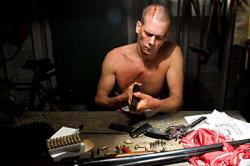 Ah, the end of summer. Gone are the blockbuster popcorn movies and in come the prestige, award-seeking movies. And here comes Death Sentence, a movie sure to garner award nominations. Kevin Bacon certainly has my vote for the Golden Raspberry this year for worst performance by an actor. And the script, well a script this bad doesn't come along everyday and certainly deserves some kind of recognition for just how truly awful it is. In fact, for a movie to be this bad, requires real effort on the part of the entire cast and crew and everyone involved with this train wreck of a movie should be singled out for the truly crappy work they put into this film.

Let me get the plot out of the way. Bacon stars as a wealthy family man who's son is murdered in a gang initiation. When the legal system lets him down, he decides to take matters into his own hands and kill the guy who killed his son. This in turn pisses off the brother of the murderer and he decides to try and kill Bacon's family and before you can say, "Death Wish", Bacon is turned into a "bad-ass" killer who's on a spree trying to kill every member of the gang.

The problem with the plot, apart from the many plot holes, which I'll get to in a minute, is that the movie is really a revenge fantasy, but the script is afraid to embrace that. The original Death Wish played into the New York City white-flight of the 1970s when crime was rampant and it seemed that the gangs ruled the streets. Charles Bronson certainly never showed any remorse over his actions. But here, in a more sensitive decade, Bacon is shown being reduced to the level of those who killed his son. This movie wants you to root him on and feel bad about what he's doing at the same time. This might have worked with a better script, but here it is just over-the-top melodrama.

As for the plot holes I mentioned, there are many. There is a huge action piece that takes place in a parking garage. Bacon is being chased by the gang members and he ends up killing one of them. However, the police never discover it was him. Can anyone tell me of a parking garage in any major city that doesn't have surveillance cameras? Also, tons of people see him being chased by the gang and yet somehow the police never discover what happened. Later in the movie, Bacon escapes from the hospital to continue his revenge. The police want to stop him and yet he is able to go back to his house for hours and the police who are looking for him, never think to check for him there. In another scene, one of the gang members comes to Bacon's office. The security guards at the front desk of the building try to stop him, but the gang member gets onto the elevator before they can stop him. Instead of just stopping the elevator and bringing it back down, they apparently run up the fifteen floors to the office.

One of the biggest things that bugged me about me this movie is at the very beginning of the movie when Bacon's son is killed. They are driving through a really bad part of town and are forced to stop for gas. Either they never should have been driving through this part of town, or if they had to, they damn sure should have made sure that they had enough gas so they wouldn't have to stop. And when they do stop in this area, Bacon just blithely lets his son go inside to buy a slushee. You'd think a movie with so much melodrama would have a scene where Bacon's wife blames him for the death of their son (because I certainly put part of the blame on him), but it never comes.

So this movie ends up being an action movie with lots of violence, death and gore, that also wants to tell you that such violence is wrong. It would take a much more talented group of people to make that work than the ones behind this movie.