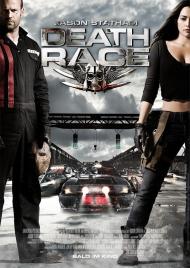 It might make a good video game, but as a movie it leaves much to be desired.

Although Death Race isn't based on a video game, it sure plays out like one. This ultra-violent race movie takes place in three stages, each increasing in difficulty, much like the levels in a video game. There is very little character development or plot, but lots of action and motion. One thing that it does have in common with most movies that are based on video games is that it's not very good.

Jason Statham, who can't seem to get away from action movies in which he drives, stars as Jensen Ames, a family man who is falsely imprisoned for the murder of his wife. The prison he is shut up in runs a car race; the Death Race of the title. Any prisoner who wins the Death Race 5 times will also win his freedom. The races are televised and are a big business, bringing in Warden Hennessey a great deal of money and power. She will do anything to keep the ratings up. It's kind of like Mad Max, but with sponsors and pay-per-view.

Jensen ends up racing of course and the movie plays out over one race, split into three stages. Each stage is violent, bloody and really loud. If watching cars beat the shit out of each other is your thing, then you will enjoy this movie. Personally though, while at first the race is exciting, it very quickly gets repetitive and at nearly two hours it would have required more plot than this one provides to hold my interest. Sure, some of the action is good and some is shocking, but that's not enough for a movie, or at least it's not enough for this one.

Normally Statham is quite good. He certainly elevated the Transporter series. He has a rugged charm that he uses to good advantage. Here though, he is completely wasted and practically anyone could have played this part.

Playing the villain of the film is a slumming Joan Allen. Clearly there's only one reason why an Academy Award Nominee and Tony Award Winner is doing this movie and that has to be for the money. Although she plays a bit of a bitch, the script isn't nearly smart enough to make you really hate her. Frankly there isn't anyone in the movie who's really very likable, even Jensen, so the fact that she's unlikable doesn't really distinguish her from the "good" guys.

Apparently this is a remake of a cult classic from 1975, although I've never seen it, I can only assume it's better than this. While I can just see how this plot would be enjoyable as a video game, watching it play out as a passive audience member is a bit mind-numbing.

For a full length movie there is very little plot. A man is forced to drive in a deadly race, is essentially the entire movie. Sure, Scott mentioned Allen and the different stages, but so what. That is just window dressing trying to hide a very dull window.

Feeling like I missed something, I decided to watch the extras on the DVD. Often I watch the bonus features to learn tidbits about a film. For example, in the bonus features for The Sixth Sense you learn that the color red is symbolic throughout the film. On the DVD bonus Features for Death Race they discussed Jason Statham's physique. Tyrese Gibson goes on about it. Statham complains about how he has to eat raw vegetables to keep in shape. Sure, Statham is in good shape for this movie but so what? It plays very little into the plot, but since there is very little plot to speak of, I guess they had to talk about something.

The director talked about how it was a favorite film of his when he was younger. He described the original as a movie you had to sneak out and see without telling your parents because of the violence and gore. Well, that was then and this is now. Some gore and violence does not alone make a movie worth seeing, and doubtfully caused many kids to sneak off and watch what they could simply play on any video game system.