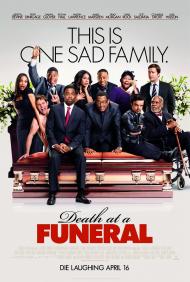 Death at a Funeral tries hard to be a zany, quick paced farce, and nearly succeeds. With lots of characters moving about, vying for your attention, it never gets dull. It is like an episode of Arrested Development, with Rock in the Bateman role. Except here, everyone‘s problems are easily solved by a mere conversation, resulting in a film that is more frantic than funny. The film pretty much plays out in real time.

Rock plays a frustrated, married writer, who still lives at home. He and his wife are trying to have a baby. The funeral for his father is to be at their home, bringing their family and friends all under one roof. His tight wad brother Lawrence, is a successfully published author, who refuses to help pay for the funeral. They have issues.

Each funeral attendee seems to bring a problem. Saldana is engaged to Marsden, but her father does not like him. Her old boyfriend, Wilson, wants her back. Marsden accidentally gets high on some of Saldana‘s brother’s drugs, and ends up naked on the roof.

The surprise visitor is a man that he has been having an affair with Rock’s dad. This prompts the films most memorable line. When Rock tells Lawrence of their father‘s secret lover, Lawrence comments on him being white, to which Rock responds, “Let me get this straight: our dad was "bromantically" involved with a guy that could fit in his pocket, and you're mad because he's white?”

It is a decent line, but it seems out of place in such a politically correct film. Other than that line, no one makes any racial jokes. Although Saldana’s brother is bothered by having to help a naked Marsden off the roof, no one makes any gay jokes either. It is a nice change, but it also seems too sanitized. In his father’s eulogy, Rock calls him an exceptional man because he saw everyone as equals.

Sure there are some funny moments here. Rock’s mother never wastes a moment to get a dig in on her childless daughter in-law. After being told his dad was gay, Rock suddenly notices a book on Madonna, laying in his father’s study.

The film could have definitely used one mean Archie Bunker type character. Glover is in that role, but other than calling Morgan fat, he is harmless. In one of the most offensive scenes, Morgan takes Glover to the bathroom, and ends up with feces on his hand. Death at a Funeral could have used some darker jokes. 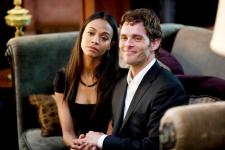 Like you Eric I found the lack of racial or gay jokes to be refreshing. Times have definitely changed. 30 years ago Peter Dinklage’s character would most assuredly have been referred to as a midget. Here there is only one direct reference to his height. The line you mentioned. Sure one over-the-top Archie Bunker type could have added to the movie but I found it to be quite funny anyway.

In fact, both me and my life partner Rich laughed out loud quite a few times. My favorite characters were played by Loretta Devine and James Marsden. Loretta as the family matriarch tells her childless daughter-in-law, “You can’t understand death until you’ve given life.” Marsden, high out of his mind, singing “Amazing Grace” to comfort Devine’s character was hilariously awkward.

The fact the father was a closeted gay man is done quite amusingly. Eric, you mentioned the Madonna book but Rock also overhears some older guys talking about how his dad always wanted them to go skinny dipping together as boys. His father’s room is even filled with iconic gay paintings like Thomas Eakins’s The Swimming Hole.

I didn’t see the 2007 movie that this is a remake of so I can’t make a comparison. I will say this is a fast paced, funny little comedy with a great cast. Rock, Lawrence and Morgan are all at the top of their games. Martin Lawrence gets one of the best lines in the movie that almost made me choke. He is lusting after a young woman at the funeral. Rock tells him that she is only in the 12th grade. Lawrence responds, “She might be only in the 12th grade, but that ASS is in grad school!”

Tracy Morgan and Chris Rock in Death at a Funeral.

Like both of you, I thought Loretta Devine was one of the funniest characters as the snide remark making mother and not just because her jokes weren't included in the previews.  Her and the under-used Regina Hall share some of the funniest moments.

The script definitely goes out of its way to stay clear of racial jokes.  In fact, it barely plays a part in it at all.  Saldana is dating a white man (Marsden) and her dad doesn't like him, but to make sure that you know it's not a rascist thing, the movie makes a point to show that her old boyfriend (Wilson) is also white and that her dad liked him and actually wants her to marry him.

Maybe the real secret to this movie is that the cast, as led by Rock, is very likable and, for the most part, real.  You can actually believe they're a family and for the most part you can empathize with them even when they think they've just killed someone and are about to hide them inside their father's coffin.

Perhaps in a little while after people have forgotten the previews altogether, this movie will be discovered again and be thought of as a comedy classic.  I know I laughed the first time I heard the jokes.  It's just too bad for most of them that I heard them months before the movie ever came out.