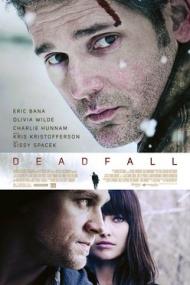 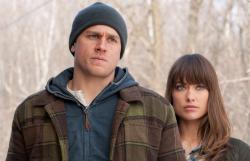 I am not sure why Deadfall only saw a limited release in the United States and a large international one. It is one of the best thrillers I have seen in a long time. With an all star cast and a pace that builds quickly, Deadfall deserved more credit than it originally received.

Deadfall tells the story of three dysfunctional families during a November Michigan blizzard. The first is Addison and Liza, dangerous and damaged siblings on the run after robbing a Casino. They are headed to northern Michigan with the goal of crossing into Canada. We then meet Jay as he leaves a Detroit prison. He also heads up north to see his family for Thanksgiving.  Lastly, there is Sheriff Becker and his deputy/daughter Hanna. She wants his respect but he finds verbal and physical abuse easier to express than love.

After some mitigating circumstances, Addison and Liza decide to split up on foot but keep in contact by cell phone. Liza ends up hitching a ride from Jay, who informs her that he is going to his parents home, which is near the Canadian border. Liza privately calls Addison and they plan to meet there. Addison, in the meantime cannot stop killing people and the police are in hot pursuit. The three families all end up at Jay's parents home for a Thanksgiving no one will forget and not everyone will survive.

The director, Stefan Ruzowitzky, explains on the DVD that Deadfall, "...is the modern concept of a western." The entire film plays exactly that way. With plenty of shoot outs in isolated outdoor locations. Instead of horses there are snowmobiles.

Where it differentiates itself from those westerns of old are the characters. Hardly anyone on screen wears a white hat. Sure, we like some characters better than others, but all are fleshed out with flaws fully on display. The least subtle being Sheriff Becker, and consequently he is the least sympathetic.

Each person has issues to work out. Addison and Liza have a complicated abusive past. It all comes back to Addison when he finds a home with an abusive man and his frightened family. After meeting, liking and making love to Jay, Liza begins to see a possible life away from her domineering brother. Jay's parents want very much to become close again to their son, who likewise wants to escape his past. Hanna has meanwhile been accepted to an Academy that would take her away from her father.

Do not get me wrong, this is first and foremost an action thriller. People die in many and varied ways. The beauty of the film is that we get to know the players in very little amounts of time. Although they spend only a couple of days together, we know enough about Liza and Jay to understand that they may very well be the only person in the entire world to understand and accept the other for all their unique flaws. You want very much for them to make it through the Thanksgiving dinner.

Eric Bana is good as the psychotic Addison. You never know what the disturbed Addison is capable of. If only he could have kept better track of his accent.  After several years of working on "The Sons of Anarchy", the British born Charlie Hunnam faired much better.

Deadfall is not without its flaws. The climactic scene at Jay's parents home is a bit over-the-top and the ending does not exactly state what happens to the survivors. The last thing I must point out is that Michigan and Canada do not in fact share a land border. You have to drive over a bridge or a frozen lake. Still, Deadfall drew me in with its interesting characters and unrelenting pace. It deserved a much greater release than what it received.

Sorry Eric, but I was much less enamored. Deadfall is a run-of-the-mill thriller with a cliched plot and some pretty bad acting. Stefan Ruzowitzky directs with style, especially early on in several outdoor snow scenes. It's just too bad the script by Zach Dean isn't better. The characters are ones we've all seen before and the story follows a very well worn path.

As for the acting, Eric Bana somehow manages to make the psychotic Addison into a bland and uninteresting cipher. This part needed to be played pedal to the metal yet Bana never gets out of first gear. Although to be fair, when compared to the amateurish performance by Charlie Hunman he at least seems competent. Hunman provides the beefcake though and in one scene he parades his miraculous behind before the camera. It's his best asset (pun intended).

The women fare better. Olivia Wilde brings some sassy sex appeal and vulnerability to her role as Liza and Kate Mara is good as the frustrated deputy with the sexist father. Old pros Kristofferson, Spacek and Williams are on hand to show the kids how it's done.

Mara played Heath Ledger's daughter in Brokeback Mountain and the love scenes between Jay and Liza reminded me of that movie. Just like Ennis and Jack, Jay and Liza have a rushed, violent fuck the first time they have sex and then tenderly make love the second time.

Eric didn't mention it but there is an overt suggestion of incest between Addison and his little sister Liza. She catches him staring at her half naked body in one scene where she tells him it's okay for him to look and he forces her to repeat that she's his little girl in a lurid tone of voice. Addison and Liza are way beyond dysfunctional.

As Eric said, the violence goes too far at times. People are killed or seriously injured right and left, all building up to the climax in that quaint old Michigan farm house. Sissy Spacek gets the best scene when she is in the kitchen and Addison appears behind her with his gun pointed at her head. He asks her why she seems so calm under the circumstances and she sensibly replies, “A panicking woman is no help to anyone.”

Deadfall is entertaining in a very generic sense. It is a fast-paced thrill-ride, just be prepared to overlook the paint-by-numbers plot and lackluster acting by the two male leads.