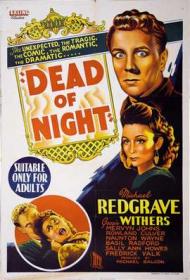 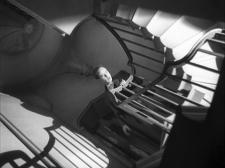 Eerie and suspenseful without gore or extreme violence.

Dead of Night is an intriguing black & white horror movie from England in 1945. It is a series of ghost stories leading up to a unique and unexpected twist ending, long before they came into vogue. Each of the different stories was helmed by a different director, yet it blends together almost seamlessly.

It begins with a man driving up to a large country estate. Upon entering the house he informs the group of people there that he has dreamed repeatedly about this house and these people. He predicts that a penniless attractive brunette will show up unexpectedly and that the dream ends violently. Among the group there is a psychologist. While everyone else seems ready to believe the stranger, this man is skeptical.

Each of the people present relates a story they experienced dealing with the supernatural. One man was forewarned of a bus crash by a ghostly hearse, a young woman met and comforted a ghost-child while playing hide-and-seek in an old mansion, another woman bought a possessed mirror for her husband. Whenever he looked into it he saw the reflection of the room where the mirror had been. Eventually being possessed, through the mirror, by the ghost of a murderer.

There is one humorous story about two golfers in love with the same woman. This is the weakest of the stories and seems out of place with the mood of the rest of the movie.

The final story is the most eerie. Michael Redgrave plays a ventriloquist with serious mental issues. He has a split personality. Half the time he is himself and the other half he is the dummy. After this last story the movie quickly heads to its macabre climax. I won’t give the ending away but it is original and unexpected.

Dead of Night is one of those forgotten gems from the past that still has the power to frighten. Aside from some overly dramatic acting and the one out of place story this is a very good horror movie, psychological and suspenseful but without any gore.

Michael Redgrave with his dummy in Dead of Night.

This eerie little horror film was produced by Ealing Studios, most famous for their string of comedies in the late 1940s and early 1950s, including The Lavender Hill Mob, Whisky Galore, and The Ladykillers. A horror story was something of an anomaly for the studio, but they managed to produce one that even nearly 70 years later, still manages to provide a few chills.

The elephant in the room of this movie is the golfing story. As Patrick said, it's the weakest section and it really breaks the mood. As the only comedic section, it's more typical Ealing Studio fare and was directed by Ealing stalwart Charles Crichton who directed The Lavender Hill Mob and A Fish Called Wanda, but it's very out of place here. If the producers wanted some comic relief to break the film's tension, they should have made this section shorter. The two golfing obsessed buddies were a running joke for the two actors who played them. They appeared together as a double-act, under different names to avoid copyright issues, in several films, including Hitchcock's The Lady Vanishes. When the film was released in America, this section, as well as the "Haunted Mirror" section, were removed. The removal of the mirror story is regrettable, but cutting the golf tale could only improve the film even though, or perhaps because, it contains the film's funniest joke when the one golfer has no problem swearing to give up his girlfriend, but draws the line at giving up at golf.

Unlike most modern horror films, this one relies on eeriness rather than outright scares, and modern audiences are apt to find it tame as a result. I was struck by the story of the ghost child, which was based upon an actual murder story from the 1800s, and while that one was playing out, I was expecting young Sally to be startled by or even threatened by the ghost of the killer, but nothing of the kind happens. The action is fairly sparse and the gore non-existent. The horror here is more psychological, moody and relies upon the viewer's imagination. It's best watched late at night with all of the lights turned off to help get you in the right mood.

I agree with Patrick that the final story is one of the film's best. Michael Redgrave, father of Vanessa and Lynn, is quite good as the ventriloquist with the troubled relationship with his dummy. There's always something creepy about those dummies anyway, and this movie capitalizes and exaggerates that to good effect. Possessed dolls have since become a standard horror trope in films and on television. Chucky owes a debt to this film.

Although not particularly famous, at least on this side of the Atlantic, it's not unknown, especially in the industry. Martin Scorsese included it on his list of scariest horror films of all time and in a poll in Time Out in the early 2010s, where the magazine asked authors, directors, actors and critics who had worked in the horror genre to vote for the top horror films, this one came in at number 35. If you haven't seen it and you're a fan of creepy ghost stories, this one is definitely worth checking out. 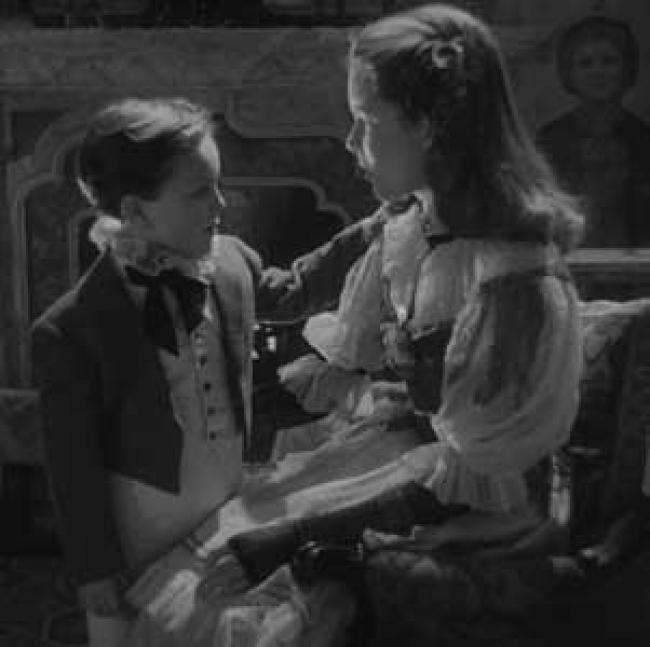 I have no clue if Dead of Night was at all an inspiration for "The Twilight Zone" but I kept thinking of the television show throughout this episodic film. Each person’s haunted tale was like a single half hour show. There were four different directors, each directing a segment and four different writers, including famed science fiction author H. G. Wells.

Watching this film today, none of these different stories seem at all surprising as so many other films over the years have stolen several ideas from it. My brothers both liked the “The Ventriloquist's Dummy" story. It is the scariest and most unexpected segment of them all. It also ties everything together at the end. I also agree about “Golfing Story” not being needed. Not only is its tone vastly different from the others, it is the only story that does not come back into play at the climax of the movie.

My personal favorite part is "Christmas Party", where, as Patrick noted, a young woman meets and comforts a ghost-child while playing hide-and-seek in a mansion. Dead of Night is all about ghost stories and dreams, and "Christmas Party" reminded me of a dream I use to have over and over again. In my dream there was this old Victorian type mansion that I would roam the halls and yard of as a child. There was the red carpet on the stairs of the main hall. I remember the small room upstairs used as a classroom, full of books, a globe and desks. I remember the hill behind the house whose green lawn stopped at the edge of some woods. There was also a stream…okay, okay, I got off track but this film is haunting and it brought to mind the repetitive dream that use to roam my subconscious.

My brothers both mentioned Michael Redgrave and he does a great job, but the most recognizable name in the cast is probably Sally Ann Howes. Come on, even if her name does not ring a bell, you have likely seen Chitty Chitty Bang Bang (1968), where Sally Ann Howes played Truly Scrumptious.

As Scott wrote, it is the settings and the feeling of eeriness that permeates the film that gives it its horror status. The best thing going for Dead of Night is the completely surprising ending. I had seen all of these stories before in more recent movies but the ending remains unique and vastly haunting.