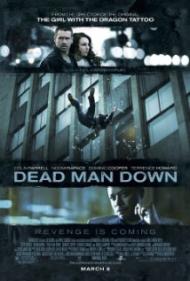 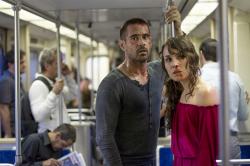 Colin Farrell and Noomi Rapace in Dead Man Down

WWE studio has produced around 30 films thus far and although it has had some minor successes, it has yet to create a blockbuster. With Dead Man Down the expectations were high. Its director, Niels Arden Oplev gained international recognition from his work on the original Girl with a Dragon Tattoo movie. The international cast is very well known. The plot is gritty and action packed. Still, it never found a large audience.

Colin Farrell plays Victor, a gang enforcer, working for a crime lord named Alphonse, played by Terrence Howard. Victor lives alone but occasionally stares at a woman, Beatrice, who lives in an apartment across the street. He soon discovers that she has been watching him as well.

Beatrice initiates a relationship with Viktor and while on a date, reveals to him that her facial scars are from a car accident. She also informs him that she knows he is a murderer and will go to the police with evidence unless he kills the man who caused the car accident.  Viktor’s plate is already quite full as he has a revenge plan of his own already at play.

Viktor and Beatrice are vastly damaged people, who are both out for vengeance. Both are hoping acts of violence will cleanse their hate filled souls. They develop feelings for each other, of course, but will that serve them or make them even more vulnerable?

Dead Man Down contains several tense, and violent, action scenes. You quickly come to empathize with the leads. It starts a bit slow but you will never get bored watching this. Some of the dialogue is very poignant, the film starts with a soliloquy by Dominic Cooper which contain the line, “You know what she said to me? She said that even the most damaged heart can be mended.” The last line in the film is Cooper asking, “Did you choose not to kill me 'cause I've got a wife and a kid?” The response comes back, “No. I didn't kill you because they've got you.” With so much going for it, I have no idea why Dead Man Down never became the hit it deserved to be.

Oplev was reportedly not happy with the American advertising campaign, stating it misrepresented the film. He may have been correct as I have no recollection of any advertising campaign for this film. He also claimed that budget problems caused him to not be able to edit the film the way he wanted, which makes sense to me as it took me a few minutes to find this film’s rhythm.

The early WWE films starred men from their wrestling stables, while as of late their roles have been greatly reduced. The only face WWE fans will recognize here is Stu Bennett, who wrestles under the name Wade Barrett. He has a small role as one of Alphonse’s body guards.