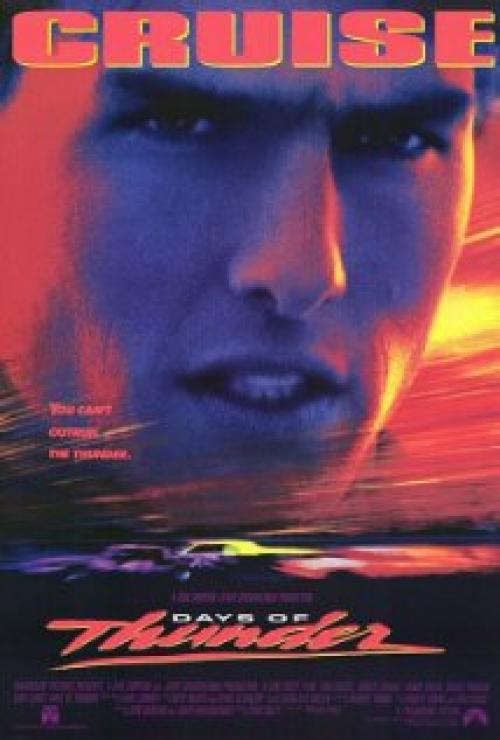 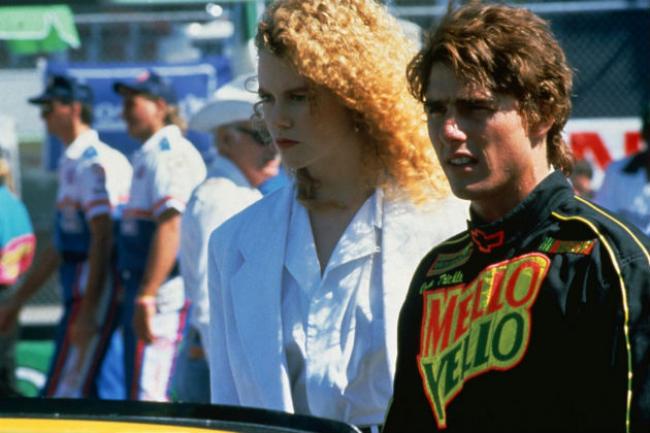 Nicole Kidman and Tom Cruise in Days of Thunder

The role of Cole Trickle was a natural fit for Tom Cruise. Just like his role in Cocktail (1988), Cruise plays a man starting a career he really knows little about. Cole also has the confidence/arrogance that is prevalent in most of Cruise’s parts. Add some minor daddy issues and you have the standard Tom Cruise role that populated so much of his earlier work. It should not be a surprise to anyone that it was Cruise himself who came up with the basic story for this film. After working with Paul Newman, a racing aficionado, in Color of Money (1986), Cruise became fascinated by racing after doing some practice runs with Newman.

Cole plays a hot young driver and Robert Duvall an old farmer who builds his cars and manages his pit crew. The first half hour or so is merely the two of them learning how to get along and work together. Randy Quaid plays the manager who gets Cole a sponsor. Everyone’s goal is to get to the Daytona 500. Cole wins races, earns some fans as well as a rival, Rowdy Burns. There is plenty of race track action but little plot.

A story line finally begins when Cole and Rowdy get into an accident and both are airlifted to the hospital, where Cole meets Dr. Claire Lewicki, played by Cruise's future wife, Nicole Kidman. Their first scene is played for laughs as Cruise takes Kidman’s hand and places it in his crotch, thinking his pit crew has hired a disguised stripper, as they had earlier. Kidman was reportedly handpicked for the role by Cruise after he saw her in Dead Calm (1989). She was still using her natural red hair and her Australian accent was very noticeable. Their marriage may not have lasted but he sure as hell gave her career a boost.

The rest of the film deals with Cole recovering from his accident and dealing with a new rival, played by Cary Elwes who was at the peak of his career. Cole also must learn to control his temper on and off the race track. Control is the movies theme. After having sex, Claire asks Cole, “Tell me what you love so much about racing.” Cole answers, “Speed. To be able to control it. To know that I can control something that's out of control.” Just like in Top Gun (1986) when he had, “The need for speed.”

Days of Thunder is a decent enough film considering the characters were worn out in 1990, the plot is as predictable as any sports film and the love story is warm, at best. Your enjoyment of this film may be greater if you are a racing fan. Some get a surge of excitement watching cars tear around a track while it bores the shit out of others. Ventriloquist Jeff Dunham once made a joke about watching a race, “Look, another left turn.” Several famous race car drivers make cameo appearances and Cole Trickle’s name was obviously inspired by driver Dick Trickle. I know. What were his parents thinking?

I am a Tom Cruise fan but just because he found a new hobby, did not mean it made a great film. 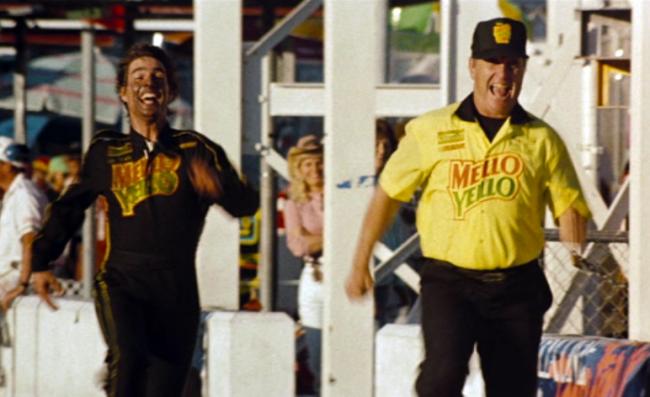 Tom Cruise and Robert Duvall in Days of Thunder.

Exactly Eric, Cole Trickle fits Tom Cruise like a racing glove. He's the embodiment of the Cruise persona. He's an arrogant, ignorant, talented, hothead. He struts around like the cock of the walk and backs it up with his natural driving ability even while lacking rudimentary knowledge about the sport of racing. And what would a Tom Cruise movie be without his explosive temper being on display? You know, one of those scenes where he suddenly goes all Al Pacino, barks out a few lines, runs his hands through his hair and stalks around the room.

I couldn't take any of this seriously. The father/son dynamic between Cole and Harry is poorly written. Even Robert Duvall can't act his way through this much corn syrup. I laughed out loud when a 22 year old, baby-faced Nicole Kidman showed up playing a neurosurgeon. She must have graduated high school when she was seven since becoming a neurosurgeon in the United States requires four years of undergraduate, four years of med school, plus a seven year residency. Barbra Streisand at 74 playing the mother of two young girls in Gypsy would be more believable than Nicole Kidman was in 1990 playing a neurosurgeon.

Sure some of the racing scenes are exciting, if you like that sort of thing. As far as NASCAR goes, I'm squarely in the “it bores the shit out of me” category (I did learn a bit of trivia however. 2016 marked the 80th anniversary of the very first NASCAR race which was held at Daytona Beach, Florida on March 8, 1936). Clearly the plot was secondary to the racing aspect of the movie. It's easy to see why Cruise wanted to make the movie but I think he enjoyed making it a lot more than I enjoyed watching it. It was a hit at the time but Cruise's star was then at its very brightest. Audiences would have paid money to see him play Peck's Bad Boy. From the vantage point of several decades later, Days of Thunder looks pretty bad.