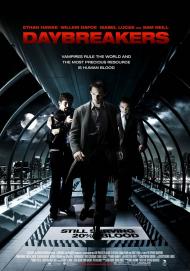 Directed by: The Spierig Brothers 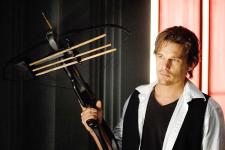 Another brother team is making it's mark in movies. Twins Peter and Michael Spierig wrote and directed Daybreakers. It is their third film together, but their first major world wide release.

A vampire plague, started by bats, has turned almost the entire human race into vampires. The year is 2019 and the world is suffering with a diminishing supply of blood. A large corporation pays to have the remaining humans found and brought in. They are put on machines, and kept alive, so their blood can be slowly milked from them. As the milked humans slowly die off and free humans become more scarce, the vampire population becomes more desperate. As vampires become deprived of blood, they transform into a bat-like monster.

Edward is a vampire who works for that same corporation, researching blood substitutes. He finds the milking humans process morally wrong and refuses privately to drink blood. He is slowly starting to change. His brother Frankie hunts humans. One day Edward comes across some humans and helps them out. He betrays his employer, as well as his brother, by joining the humans in trying to find a way to save humanity.

The world of vampires is nicely detailed. Everyone drives cars equipped with window coverings and cameras in case the driver has to drive during the day. A public service announcement is made every night to alert citizens of dawn approaching. Although it takes place in the future, everyone dresses like it is the 1940's. Women all wear dresses and men wear hats.

Daybreakers plays on many levels. First and foremost is that it is a blood bath. Several scenes feature plenty of blood lust and carnage as bodies get feasted on. Another angle to the film is the allegory of blood as oil. Although we are not desperate for oil as the vampires are for blood, we are supposedly trying to find energy alternatives just as Edward is trying to find a blood alternative.

Daybreakers is what the movie I am Legend, should have been. It owes a lot to the novella, I am Legend. Where Daybreakers exceeds them both is in the ending. It is harsh, but makes complete sense within this genre. Daybreakers is the best horror movie I have seen in a long time. I hope the Spierig brothers can avoid the Wachowski brothers sophomore jinx and follow this up with another great film. 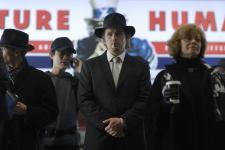 Although some of the details of the plot are slightly reminiscent to the ending of the I am Legend novella, this movie in no way approaches that book's greatness. The brilliant ending to I am Legend is the revelation that the last human left alive on a planet filled with vampires is now the legend and the monster. There are no such revelations here.

And while I can see where blood as an allegory for oil could be read into the movie, it's only because both items are precious commodities in their respective societies and not because of anything written into the script. If they wanted to make blood seem like oil, they should have had some countries be rich in humans while others had none and then added some politics to the mix.

Being a vampire in this world doesn't seem like that much fun. The cool thing about being a vampire is the amazing powers, the immortality and the freedom to exist outside society's rules. But in this world you can be a vampire with the immortality and the amazing powers and still apparently have to work in a coffee shop. And everybody smokes (which makes sense since it's not like you can die of lung cancer), so somebody has to be out there with their vampire powers growing tobacco. Also, presumably, there are vampire garbage men, maids, administrative assistants, etc. How exciting for them!

I do have to agree with Sam Neill's character when he says, "What's to cure?" The vampires in this movie are basically just humans with immortality. They act and behave just like us, only without death and disease, for which simply avoiding the sun seems like a small price to pay. Surely a blood substitute is a good idea and the way to go rather than trying to "cure" all the vampires?

There are also plot holes in the story. Why for instance, do the humans need Ethan Hawke's character at all? They say it's because he's a blood doctor, but they already know that the sun is the cure, so why didn't they ever try capturing a vampire and sticking him in the sun? The cure doesn't really require Hawke's character at all.

This is a stylish movie. There's no real explanation for why everyone dresses like the 1940s, but it looks cool. And there is some good action with plenty of blood and gore.

Ultimately though, I just didn't really care about any of the characters. Ethan Hawke is supposed to be the hero, but apart from being a mopey little bitch, he's not given much personality and certainly not enough to make me care about him.

I'm always a sucker for a good vampire story, but this just isn't one of them.