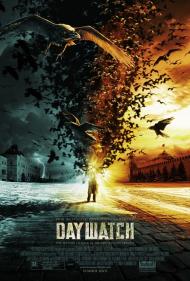 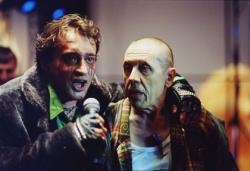 Day Watch is the second film in the immensely popular Night Watch series.  It is very popular in Russia anyway.  Like it's predecessor, it was the number one box office film in Russia the year it came out.  In fact, it made more money than the first one.

Anton is now on a mission to get his son away from the dark Others.  To do so he attempts to find an ancient relic that may help undo what has transpired.  To do it he may have to break the long standing truce between the light and dark Others.    Before he knows it, the dark Others are hot on his trail as he has been framed for killing a dark Other.

Plenty of special effects and action pack the film.  The vision of  Timur Bekmambetov and his special effects wizards are truly amazing.  My favorite bit is when a woman is driving like mad down a road in a hot red sports car.  She jumps the curb and drives along the side of a curved building.  She breaks, turns the car and ends up crashing through a window, and then drives down the hall and busts through some doors.  Gloriously over-the-top, and since she is a supernatural being, you buy it.

Day Watch also has a funny scene in which Anton and Olga switch bodies.  He goes to his girlfriends apartment to hide out, but she does not know Olga is actually Anton.  Of course it leads to a scene where she takes a shower and of course asks Olga (Anton) to bring her a towel.

The movie is big, brash, and fun.  It is also a wee bit confusing at times.  The others have powers that are not at all defined.  They seem to be able to do what ever they want, when they want.  They keep coming up with new abilities every other scene.  There are mere vampires.  There are Others who can change shape.  Some can enter another dimension, the gloom.  Some can do it better than others.  Just accept everything as it comes at you and you are in for a fun time.

In one scene Anton is being chased by some dark Others and he jumps through a billboard movie poster of 9 Rota (9th Company).   It was the biggest Russian film in domestic ticket sales in 2005.  In 2004 it was Night Watch, and in 2006 is was Day Watch.  Aleksey Chadov, whose role increases somewhat this time around as the nosey vampire neighbor, appears in all three films.  Talk about a hot streak.

Although four stories have been written for the series, there is no sign of any more being made.  The third and fourth are in limbo.  If they are going to make them, they need to get off their asses, hire back the same crew and cast.  These films walk a very delicate line of camp and audacity.  I doubt  anyone but the original film makers could pull it off again. 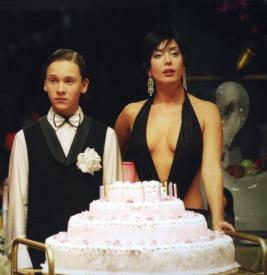 It had been a few years since I last watched Day Watch and I had forgotten just how neatly it wraps up the events begun in Night Watch. This may have originally been envisioned as a trilogy (Eric you mention four books being written) but clearly this is the end of the story. To continue the series it would need a kick start.  Although Day Watch runs a half hour longer than Night Watch it is a better movie in my opinion.

It begins two years after the events of Night Watch. Anton is now training Svetlana to be a member of the Night Watch team. In the first movie she was the one that caused the Vortex and is now on her way to becoming a very powerful witch. In fact she is destined to be a Great One like Anton’s son Yegor. Like him she can move with ease to the second level of the Gloom and the two of them are seemingly on a collision course as she is a Light Other and he chose to become a Dark One at the end of the first movie.  Anton is stuck in the middle with both his trainee/girlfriend and his son being more powerful Others than he is.

Of course Sveta and Anton begin having romantic feelings for each other.

Clearly Timur Bekmambetov had a bigger budget this time around and it shows. The scene Eric mentioned where the Dark Other chick drives the hot red sports car along the outside wall of a tall office building is one cool effect. The historical sequence (like the first movie there is a scene set in ancient times that explains part of the mythology) is also pretty amazing. It shows how the warrior Tamerlane entered a Persian maze to obtain the Chalk of Fate. Rather than figure out how to maneuver through the maze he simply rides his horse straight through the brick walls until he reaches the center.

Like Night Watch this movie manages to infuse some humor into what is for the most part a dark and violent scenario. Eric, did you watch the unrated version? In the one I saw Anton actually gets into the shower with Sveta while still in Olga’s body. Before we see any girl-on-girl action however it cuts to Sveta and the real Anton embracing in a fantasy setting by a waterfall as if to say this is what she is imagining.

There is a huge showdown at Yegor’s birthday party which leads to the very satisfying denouement. Eric, I agree with what you wrote about this movie walking the delicate line between camp and audacity. It does indeed and very well at that! 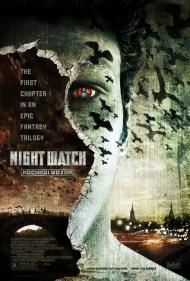