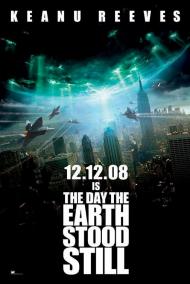 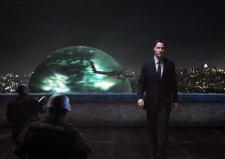 This movie has a good premise, but poor execution.

This movie has a good premise, but poor execution. Its biggest problem is its script, which is poorly written and never really goes anywhere, except to a rather unsatisfactory ending.

Keanu Reeves plays Klaatu, an alien who comes to earth to wipe out humanity to save the planet Earth. The implication being that mankind is going to destroy the planet through pollution and according to Klaatu, there are a limited number of habitable planets in the universe and so the aliens want to save the earth.

First off, that's a false premise. All mankind can do is destroy itself. It can drastically alter the planet, so much so that it becomes very difficult for humanity to live on it, but the Earth would survive. It can destroy itself with nuclear bombs, but the planet would recover.

Secondly, Klaatu has such amazing power that he could easily help the people of Earth develop eco-friendly fuel. His excuse to not doing so is that "technology isn't the problem, people are." Considering how far humanity has come, that's also a false premise. Have we not evolved? Haven't we outlawed slavery, developed codes of law that attempt to be equitable and fair to all, developed great science, constructed beautiful works of art? Where does this alien get off saying we're the problem? He's prepared to murder billions and we're the problem?

Fortunately for the people of the Earth (spoiler alert), all it takes for Klaatu to change his mind is for John Cleese to say, "People can change" and for Will Smith's son to cry. I mean, seriously, how much research had these aliens done about the Earth?

One of my favorite actresses, Jennifer Connelly, also appears in the movie. You might think that she would be there as a love interest for Klaatu and that maybe he falls in love with her and that's what changes his mind about wiping out humanity, but if you thought that, you would be wrong. The two share no chemistry and while Klaatu plays to Keanu's strength by simply requiring him to speak in monotone and not emote at all (something he does quite naturally), Connelly's one character note seems to be depression. She mopes so much through the movie, it's difficult at times to even see why she wants to be saved. Oh, and Jen, could you eat a sandwich or something? You used to have the body of a woman, but now you look more like a boy from the neck down.

The only good thing about the movie is its production values. It all looks expensive. The scenes where the Earth starts to be destroyed are very well done. If only as much money had been spent developing the script, this might have turned out to be a decent movie. 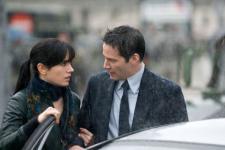 Jennifer Connelly and Al Gore are all wet.

The Day the Earth Stood Still is contemporary Hollywood science fiction 101. It has some special effects to confuse you. It has Keanu Reeves playing another monosyllabic hero. His face never changes expressions, just as it never does in any of his films. It also has an environmental message. Yeah, the liberal politics are profound.

This big sphere comes down to Earth and out pops Al Gore. He walks around saying such liberal catchphrases as, “I need to talk to the United Nations.” He condescends to everyone, telling them how they have destroyed the Earth and he knows what best should be done. That is until he learns to “feel” and then of course all is well.

Connelly is in another thankless role as a brainy hottie in a relationship with a odd ball. See her role in The Hulk, Blood Diamond and A Beautiful Mind for just a few roles she has made her trademark. To please Al Gore, and any war protestor, she tells him that her dead Army husband went to Iraq to build and not kill. Jaden Smith, the luckiest kid in the world, is actually the best actor in the movie. He is the only believable person. John Cleese shows up in a cameo as a Nobel Peace prize winner. Liberals are so impressed by them. He meets Al Gore in his own home, yet talks to him as if he is merely addressing an undergraduate trying to write a thesis and not an ALien about to destroy mankind. He and Connelly insist to Al Gore that they, and man kind, can change. The one character I truly liked was Cathy Bates. Her, “We’re fucked!” attitude was the best reaction from anyone in the movie.

My fifteen year olds review of this movie as we left the theater was, “That was kind of boring.” I agree with him. When I was not throwing up in my mouth, over the environmental theme, I was trying to stay awake. For a science fiction film, the action is minimal. Message to all of you film makers who have diluted yourselves into thinking you are teachers, “Less morals, more entertainment!”