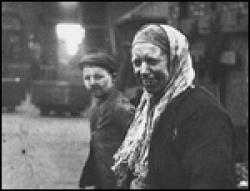 A boy and woman coal workers.

A Day in the Life of a Coal Miner shows that the documentary film has been around nearly as long as film itself. This silent documentary short was made by the British production company Kineto Films in 1910. It begins with a coal miner saying goodbye to his wife and heading off to work. He lights his lamp and descends into the mines with his fellow workers.

The next shot was taken underground.  It shows the man now shirtless digging with a pick; he wears no protection over his nose or mouth. You can just imagine that he had no health insurance, no union and probably a very short lifespan.

Next the camera shows us what other workers are doing as the coal is lifted above ground. It is surprising to see that quite a few women were employed at the coal mine. They all work above ground but the job of pushing heavy carts filled with coal is nonetheless very labor intensive. All the women’s faces are black with soot.  Some of them grin selfconsciously at the camera while others maintain a rather bleak expression.

At the end of the work day the man rides the rather unstable looking lift back to the surface and gets in line to be paid. He then heads home to his family. The final shot is the only time where the filmmakers editorialize. We see what is an obviously wealthy family luxuriating in the warmth of their coal burning fireplace, clearly oblivious to where the coal comes from or how much work was involved.

The subject matter may not be the most exciting in the world, but the camera work is quite good. Especially the shot underground. The lighting of which must have been tricky. A Day in the Life of a Coal Miner is a real glimpse into the past. As the motion picture moves well beyond the century mark these early cinematic glimpses of human existence will become more and more valuable. 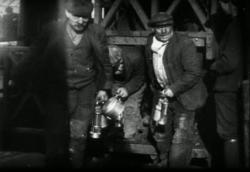 A Day in the Life of a Coal Miner.

I've recently been reading Ken Follett's "Fall of Giants", book one in his "Century" trilogy, a portion of which takes place in a Welsh mining town before the advent of World War I. Watching this documentary short was in many ways like seeing the world Follett described, come to life.

For instance, one of the title cards in this short is, "The Locking of the Lamps". Thanks to Follett, I know that this was done so that if a miner's gas burning lamp went out, he was unable to light it himself, thus exposing an open flame in a potentially deadly situation. Instead, the miner would have to take his lamp back to a safe area where a foreman could unlock his lamp to relight it. Also Patrick, there were mining unions at the time, although they hadn't really come into their own yet.

The shot underground was staged as the technology at the time would have made such filming impossible. It's not the only scene that was put together. Clearly the miner leaving and arriving home also wasn't spontaneous. And the faces of the miners are a little too clean when they are shown leaving the mine shaft for it to be genuinely the end of a full shift.

Although Patrick calls the final scene editorializing, I disagree. The film was sanctioned by the Wigan Coal and Iron Co. and so I find it unlikely that they would wish to cause unrest amongst their workers. I actually think what they were showing is that the hard work of these coal miners is what provides the heat and comfort for families all across Britain.

We often call these old movies "a glimpse into the past" and while that's somewhat true in silent fiction films of the time, that's literally what this early documentary is. 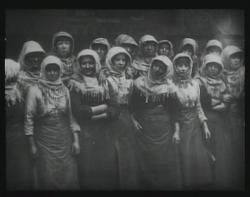 It starts with a man leaving his nice modest home and loving family. The mining facility is shown to be very efficient and well managed. We see men as well as women working very diligently. The line up of women has many of them smiling and even laughing. At the end the men receive their pay and go home to their welcoming families. The entire point of this film is to profile, in a very good way, how the coal mining industry works in its simplest form.

This is the kind of film that may have been shown to a community just before a new mine was dug or facility installed. It is very much propaganda about the benefits of coal mining. It creates jobs and heats homes. Note, how nothing dangerous is ever shown, although some of the jobs, likes raking the coal on top of the trains seem a bit unsafe. Still, A Day in the Life of a Coal Miner was clearly made with an agenda in mind.