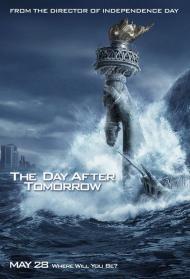 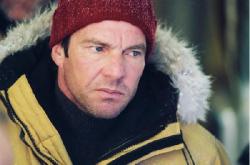 Dennis Quaid in The Day After Tomorrow.

A good disaster movie needs two things; scenes that make you go, "Whoa!" and characters you care enough about to be concerned over whether they live or die when the disasters strike. The Day After Tomorrow excels at the first, but fails at the second, due to clichéd situations and some fairly two-dimensional characters. It also tends to beat you over the head with its message, leaving very little for the audience to work out for themselves.

Despite its failings, the movie still manages to entertain, at least for the first hour or so, when the special effects take center stage.

Starting with the collapse of an ice shelf in the Antarctic, it skips quickly through a Global Warming conference in India where the over simplified science that is used to explain the sudden change in weather is laid out for the viewer. Very rapidly, it then moves around the globe showing the effects of tornadoes, hail larger than softballs, and temperatures dropping so fast that helicopters plummet out of the sky as their fuel freezes. We are also introduced to the stars of the film, including Jack Hall (Quaid), a climatologist, who plays this movie's Chicken Little.

Roland Emmerich is no stranger to big budget disaster films, having previously directed Independence Day and Godzilla. He uses this experience to good effect in the movie's most impressive sequences, destroying several major cities with sadistic glee. Los Angles is flattened by massive tornadoes, but it is New York that is hit the hardest. The Big Apple is bombarded by torrential rains, gigantic tidal waves, blinding snowstorms, and a cold snap so great that its force pops out every window in the Empire State Building. In fact, these scenes of disaster are so amazing that once the storms begin to abate, so will your interest. Without a solid emotional foundation, the movie has no where else to go, but downhill.

All we are left with are the embarrassing, poorly written, quieter human moments. No plot element is too clichéd to use in an attempt to evoke some sympathy from the audience. The script even goes so far as to have a child dying of cancer stranded in a hospital as the last ambulance leaves without him. This, of course, forces Hall's doctor wife (Ward) to stay behind to care for the boy as the rest of the city is being evacuated. Hall meanwhile, is on his way to New York to rescue his son (Gyllenhaal) who is stranded in the Public Library. On his journey through the snow, Hall manages to have 'deep' conversations with his traveling companion in scenes that nearly have the word "message" flashing in neon at the bottom of the screen. Emmerich, who co-wrote the script, knows how to direct action sequences, but needs to leave the writing to someone with an ear for dialogue.

Hollywood blockbusters are often accused of being dumbed down spectacles intended for consumption by mass audiences. This isn't always the case. It is possible to produce quality big budget films that appeal to the mainstream movie going public. The recent Lord of the Rings trilogy is a good example. The Day After Tomorrow however, makes no attempt to put any intelligence or real emotion into its script, and instead relies strictly upon its special effects. And granted, they are impressive enough to almost make this movie worth the price of admission, but once they taper off, you'd might as well leave the theater rather than put up with the final, interminable hour of story. 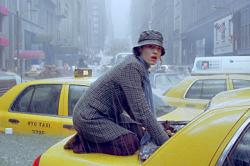 Emmy Rossum in The Day After Tomorrow.

In an interview Dennis Quaid called The Day After Tomorrow the mother of all disaster movies. It would be more accurate to call it the disaster of all movies. This overblown mess is just plain awful. Unlike Scott I didn't really even enjoy the CGI eye-candy showing the devastating storms. The implausibility of an entire ice-age happening in roughly 7 or 8 days is just so utterly ridiculous that the entire movie lacks any environmental punch. OK, so they needed a way to show the negative results of humankinds insatiable consumption of fossil fuels. Fine. But to get this important point across it needs to be shown in a way that has at least some level of feasibility. Like an overzealous preacher spouting a fire & brimstone sermon, this movie tries so hard to scare and awe that it might actually do more harm than good for the message it is trying to convey in the form of entertainment.

There were several unintentional laughs during the movie. One happens after Dennis Quaid's son places a desperate phone call to his father from the flooded lobby of the New York Public Library. His female friend rubs her body up against his in an effort to warm him up. The audience cracked-up at this supposedly serious moment.

One of the few creative points in the storyline occurs when the southern half of the United States starts fleeing to Mexico to escape the oncoming storms. In an ironic reversal of real life, Americans are illegally entering Mexican land. Mexico shuts down the border until the President of the U.S. agrees to erase all Latin-American debt.

The disaster and decrepit future movies of the nineteen-seventies may not have had the sophisticated special effects of today, but they had a few more important things going for them. Namely characters that seemed like real people, instead of oversimplified walking clichés, and situations that seemed - if not likely - at least possible. Instead we are given overblown eye-candy, overwrought melodrama, and an environmental message so dumbed down that it is completely worthless. 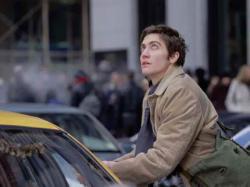 Jake Gyllenhaal in The Day After Tomorrow.

The entertainment value of The Day After Tomorrow, as my brothers have written, is very limited. But it was enough to keep my attention.

What really bugged me about this movie is the blatant environmentalist whacko, "see we told you so," message. As soon as I heard that Al Gore liked this movie, I became suspicious. Global warming and changing climates are subject to much debate. We have only kept track of accurate temperatures for a brief time on this planet. Like the economy, weather goes through cycles. I remember very warm winters and I remember winters filled with blizzards. I have lived through dry summers and very rainy ones. I do not believe that the varying degrees in temperature or precipitation for any of the seasons of my life were caused by man's influence.

If man burning fossil fuel could cause an ice age then how do you explain the first ice age where man did not have combustible engines? What, something in nature caused it then? Then how in the hell do we not know that it and not man will be the cause if and when it ever happens again?

As far as excitement goes this movie is not that bad. However, liberal Hollywood is too overzealous about getting it's "we know better than you" message out. It took the movie from being a decent adventure film to being a boring environmentalist lecture.