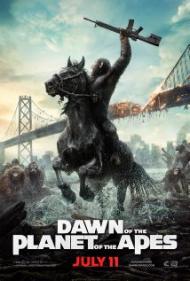 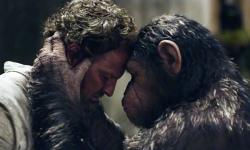 Jason Clarke and Andy Serkis in Dawn of the Planet of the Apes.

With this sequel to 2011's Rise of the Planet of the Apes, the reboot of this 1970s film series continues its winning ways. It's finely acted, action packed Science-Fiction that carries weight and manages to entertain at the same time. Although many critics have commented that this latest film is a step up over its predecessor, I wouldn't go as far as that. It equals it perhaps, but I wouldn't say it surpasses it.

The story picks up more than a decade after the previous film with most of humanity dead from the virus passed from apes to humans. Caesar (Serkis) is ruling Ape City in the forests outside of San Francisco while the local remnants of humanity dwell in the ruins of the city. The two groups come into contact when a few humans pass through Caesar's forest on their way to a dam which they wish to repair to provide power to the city. Caesar begrudgingly agrees to allow this, but Koba, Caesar's violent and scarred Lieutenant, advises that they crush the humans now while they're weak. Likewise on the human side, you have Malcolm (Jason Clarke), who wishes to make peace with the apes, and Dreyfus (Oldman), who considers them simply animals and not worth dealing with. This leads to an inevitable war between the two groups, but can peace be made before both sides are wiped out? Since another sequel seems inevitable, you just know some combination of these characters are bound to last past the end credits, but which ones?

As with the previous installment, all of the apes, and indeed all of the animals, are computer generated using stop motion. This means that in the closeups we get to see Andy Serkis do a fine bit of acting as the Chimp leader, but overall the animation still needs work and often seems uneven. Maurice, the orangutan, for instance, appears almost photo realistic and at times it's difficult to believe he wasn't actually there physically during filming. With some of the other animals however, including some of the lead characters, the special effects are rather disappointing. Even Caesar himself seems poorly animated in some of the wider shots, while his mate never looks real at all. Koba, on the other hand, is finely done and in several scenes where he interacts with humans, he too seems to be physically in shot. Although far technically superior and more anatomically realistic by comparison, some scenes even had me longing for the old actors in costume and makeup of the original films.

Fortunately the drama and the action are good enough that you don't have too much time to dwell on the special effects, particularly in the second half. Once the apes go to war, the pace rarely lets up, apart from a brief scene that features a cameo by James Franco (who for some peculiar reason drew a round of laughter from the audience just by showing his face). These battle scenes are exciting, but they lack emotional resonance. We only get to know a few of these characters personally so the deaths that do happen carry little weight.

There's a recurring theme about what it means to be human or an animal that's carried over from the first film. It never gets overly heavy handed, but it is present enough to add some gravity to the proceedings. In war, it shows, it's possible to be both.

Keri Russell, Jason Clarke, and Kodi Smit-McPhee in Dawn of the Planet of the Apes.

I too enjoyed Dawn of the Planet of the Apes, the second entry in the rebooted franchise and the eighth Ape movie overall. The sophomore effort in a series usually represents a step down from the first installment. That didn't happen here. Although I do think this movie is being slightly overpraised (contrary to what you may have read elsewhere it is not better than the original 1968 classic), it is however, as good as 2011's Rise of the Planet of the Apes. The acting and storyline are great, but like my brother I found some of the CGI to be sub par. Perhaps it is time to accept the fact that no computer generated image will ever carry the visual weight and veracity of live action.

The Planet of the Apes movies have always been both tension filled action flicks as well as studies in human psychology. They explore just what it is that makes us human. One thing they got right was the balance between the good guys and the bad guys. There are both good and bad humans as well as good and bad apes. Neither species has a monopoly on morality or vice.

Dawn of the Planet of the Apes contains a clear anti-gun message. Initially the apes don't possess any weapons more advanced than spears. They are shown living a hunter/gatherer lifestyle much as mankind did thousands of years ago. When man reenters their world, he brings along murder and introduces the apes to modern warfare.

Scott alluded to one of the best scenes. Koba, Caesar's scarred and violent second in command, goes rogue. He comes up with a plan to steal guns from the humans. He approaches two human guards and lulls them into a false sense of security by acting like a dumb ape. This scene is funny and smart as well as containing some of the movie's most convincing CGI. The apes acquiring guns is like Adam and Eve realizing they are naked. There is no going back. Innocence lost can never be reclaimed.

The movie ends on a bit of a cliffhanger, with humans and simians on the brink of all out war. I'll definitely be in line to see the next Apes movie (set for release in 2016) but somehow I'm less excited about the future of this rebooted franchise than I was in 2011 after Rise of the Planet of the Apes.

You could say that Dawn of the Planet of the Apes has an anti-gun message but that is not the real point of the story. This is a tale about prejudice and prejudging of others that we know little about. It is about the need to understand the “enemy” to realize that they are not so different than you.

This point is made when we see into Caesar’s family, finding his wife giving birth and then becoming ill. We hear how Malcolm lost his wife to the plague and is currently in a relationship with another woman. Both Malcolm and Caesar have a son who looks up to them. Both work closely with someone who is hopelessly angry at the other group.

If you really want to draw parallels to real geo political issues, you would not be far off by comparing what happens in this film to the Israeli/Palestinian conflict. In both cases, two groups of individuals live in close proximity and one needs the permission of the other to pass through. Even though, as Patrick wrote, there are extremists on both sides, either group just wants what is best for their families. Each group’s fear of the other is the real influencing factor. If the guns represent anything, it is simply the escalation of desperation. Remember the big reveal in the original film. Is this the first step toward that conclusion?

As far as the animation goes, I agree with some of what my brothers wrote. I watched this in 3-D so perhaps that affected my opinion, but I never found Caesar to be poorly animated. I do agree with Scott that Koba is done very well when in the same shots as the human riflemen. However, when Clarke, Russell and Smit-McPhee are in the ape village it seemed all too obvious that they were not standing in front of a group of apes when it was filmed. Like Patrick, I longed for the old actors in costume and makeup of the original films. I think Matt Reeves strived for that effect as he began and ended the film with a close up of Caesar’s (Andy Serkis’s) eyes.

Dawn of the Planet of the Apes too often spoon feeds unnecessary details. We do not need such scenes as Oldman crying onto a laptop of old family photos. We already know he must have lost relatives and friends. On the plus side, it has some interesting details such as the orangutan, Maurice, educating the young simians as well as learning from Malcolm’s son. If you recall, the orangutan were the thinkers in the original movies. This series of films is definitely heading in the right direction and I look forward to it playing out. 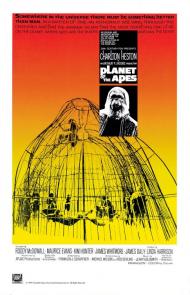 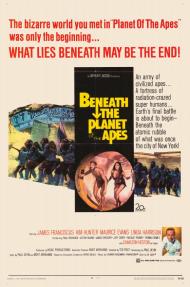 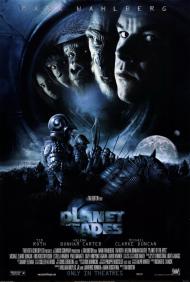 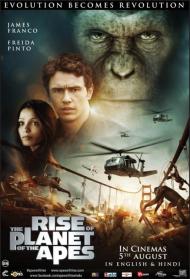