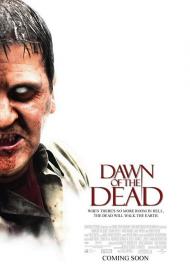 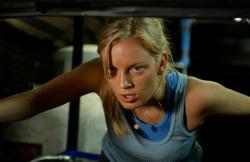 Sarah Polley in Dawn of the Dead.

Where 28 Days Later raised the zombie movie to a whole new level, Dawn of the Dead (a remake of the 1978 horror classic) is happy to revel at the gloriously gory, B-movie level. The special effects may have improved since the original was made, but at its heart this modern retelling is true to the apocalyptic zombie films of the sixties and seventies.

Like those movies of old, this one features a motley cast of likeable characters trapped inside a building, defending themselves against the rampaging mob of undead who encircle their fortress. Our heroes this time around are Ana; a nurse, Kenneth; a police officer, Michael; a drifter, Andre; an expectant father caring for his very pregnant wife, and an assortment of other characters played by lesser known actors, on whom you can practically see the bull's-eyes drawn. In this movie, as in the original, the building the group takes refuge in is a shopping mall.

As is the case with most Zombie movies, the cause is never delved into too deeply. An unnamed virus passed by biting is once again the culprit. This allows for lots of chomping by the hordes of undead and a gruesome amount of blood to be sprayed around during the action. And bites aren't the only things producing the blood. There are chainsaws, explosions, sharp objects being shoved through heads, and of course guns of every kind, all working hard to produce the maximum amount of gore possible.

Most of the action takes place in the Crossroads Mall in Milwaukee, Wisconsin. After some internal power struggles for leadership over the band of survivors, life becomes fairly routine. The shatterproof doors keep the zombies from getting inside and the group makes do with what they can loot from the stores and the food court. However, as the number of undead begins to grow into the hundreds (despite the fact that to pass the time, the group plays a shoot the zombie game from the roof of the mall), the survivors decide to make a break for it and head for the marina where they hope to get a boat that can take them to an uninhabited island somewhere. Of course, first they have to get through all those zombies.

While the movie does go way over the top at times with the gore and the characters, it's all in the name of bloody good fun. It's cheesy, but it's quality cheese. Unlike recent horror films such as The Ring, Dawn of the Dead isn't trying to be creepy or cerebral. It's all about in your face, kill-those-zombie-bastards action. And even though there are some uneven moments, like when one character inexplicably changes from bastard to hero halfway through the movie, it doesn't detract from the overall fun.

Fans of the original Dawn of the Dead should keep an eye out for cameo appearances by several of the original film's stars (keep your eyes on the televisions playing in the mall). And for everyone who sees this, if you want to know the final fate of the characters in this one, you'll have to stay all the way to the end of the credits. 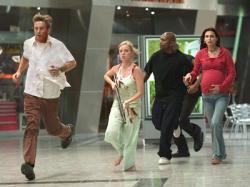 Dawn of the Dead.

Yes, this movie has lots of blood and gore. I would have preferred more scares and less bodily fluids.

I did come to like some of the characters on a shallow level. My favorite one is Michael. He has had several jobs and several marriages. Basically, he is not a big success in life. However, he thrives in this situation. He finds his niche in being a zombie killer.

As Scott wrote, you can see the deaths coming a mile away. There are few surprises to be found here, and without them, this movie lacks any real punch. For a more frightening zombie movie watch 28 Days Later! 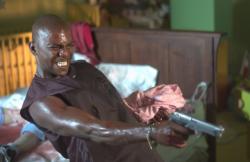 Mekhi Phifer in Dawn of the Dead.

This remake improves on the original only in the special effects department. Although the set up is the same it varies quite a bit in terms of plot especially the ending which was changed completely.

The zombies themselves have been given the 21st Century twist of being able to run incredibly fast (ala 28 Days Later). These aren't your father's zombies by any means. This detail does up the scare level in several scenes and it also seems to quicken the overall pace of the movie, which literally seems to fly by.

There is another innovation Dawn of the Dead provides and I suppose it was only a matter of time before it happened. While the zombie child has long been a staple of the genre, this is the first time I've ever seen a newborn zombie fresh from his zombie mother's womb. It is the most in-your-face and over-the-top moment in the entire movie.

While it lacks jump out of your seat moments Dawn of the Dead is a nonstop bloody-good gore fest.