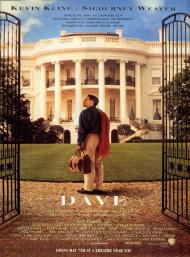 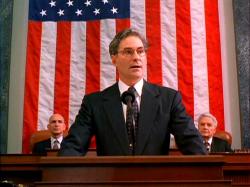 Ivan Reitman makes like Frank Capra in this overly simplified look at politics. Playing both the President and an impersonator, Kevin Kline acts like George Bailey. Instead of a Building and Loan, he owns a Temp service. He begs his friends to hire his clients. The movie acts as if he does it all for charity. Temp services are a business and they do make a profit. On the side he makes appearances as The President of the United States, due to the fact that he just happens to resemble him.

The Secret Service collects him one day, to be the President's double. Dave is to walk out of an event and wave to the crowd. He believes it is for national security. Actually, it is because the President is meeting one of his secretaries for a sexual rendevous. The President ends up having a stroke and Dave finds himself playing the President full time.

Weaver, plays the bitter first lady. She knows her husband is unfaithful, but like Hillary Clinton, turns a blind eye for the sake of staying in or obtaining power. Weaver has a thankless role but she has the movie's best line. "Why couldn't you die from a stroke like everyone else?" She remarks to Dave when they first meet, and she thinks he is her husband.

Dave features many real life politicians and thus steps into the realm of reality. Or should I write "stumbles". Dave is a very politically naive film. He is told that he needs to cut 600 million from the Federal Budget, to save a homeless shelter. He just calls in an accountant friend and they spend the night going over the books. The next day, Dave holds a cabinet meeting and he cuts the money from the budget. At the end of the meeting everyone applauds his great work.

HOLD EVERYTHING. He cut the budget by taking money away from different programs. That means that 600 million dollars that would have been going all around the country and employed many people is no longer there. Much of that money was probably going to the states of Representatives or Senators who will only vote for the budget if that money is going home to their constituents. How much of that money was designated to businesses or the creation of businesses based on campaign promises or kickbacks made by organizations that helped fund his campaign? Of course Dave would not know of such things but someone in his cabinet would have surely reminded him. Dave's one night of number crunching turns him into a hero, when in fact he probably just cost lots of people their jobs. As President, he wows everyone by starting an initiative and a vow to have a job for everyone in the country who wants one. Of course he never says how he will do it.

Dave wants to leave you feeling good and inspired. If you know as little about politics as this movie, then it may. In one of his speeches as President, Dave says, "You don't really know how much you can do until you stand up and decide to try." If the world was as paint by number as this movie presents it, we would. Dave is really nothing more than a situation comedy that foolishly tries to make some political commentary.