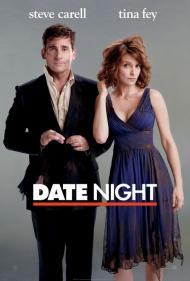 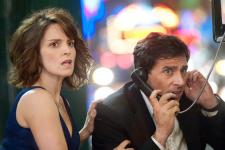 Although the central plot device of Date Night has been done many times before, it packs enough chuckles and laughs to make it worth your time. This is due in no small part to the likability of its two leads.

Steve Carell and Tina Fey play Phil and Claire Foster, a middle-class couple from New Jersey. Their marriage is in a bit of a rut with their weekly date night becoming more of a tired ritual than an actual date.

When another couple they know announces that they're getting divorced the Fosters decided to really go all out on their next date by having a night in New York City. When they steal another couple's reservation at the restaurant by pretending to be that couple, they suddenly find themselves in way over their head when it turns out that the couple everyone now thinks they are was involved in a scheme to blackmail a mobster.

What follows is a serious of misadventures as the Fosters try to extricate themselves from their predicament. If at times it feels like you've seen this movie before it's because you have, or at least parts of it in movies such as North By Northwest, The Out-Of-Towners, After Hours and even Adventures in Babysitting.

While the setup to the plot tries to be humorously realistic, as soon as the Fosters pretend to be the Tripplehorns any sense of realism evaporates quickly. Since the best part of the movie is after this happens they should have started with that point. It could have begun with the Fosters driving into the city and we could have learned everything we needed to know about them during the drive or over the course of the movie. We don't really need the ten to fifteen minute buildup.

In the hands of less likable leads this movie could have quickly fallen apart. Fey and Carell hold the insanity together. They play an old married couple convincingly and manage to wring as much humor as is possible from the film's script and the ludicrous situations that it puts them in.

The film is also peppered with cameos. Mark Wahlberg plays a shirtless security expert for laughs. James Franco and Mila Kunis are the "classy" couple whose reservation was stolen. Ray Liotta stretches his abilities by playing a mobster. And Mark Ruffalo and Kriten Wiig are underused near the beginning of the film. All of them though take a backseat to the leads.

This isn't the kind of movie that you must see on the big screen. It doesn't, thankfully, require 3-D glasses to enjoy it. And since the filmmakers are clearly trying to hide the fact that it wasn't actually filmed in New York City, there are no amazing wide shots that your television won't do justice to. In other words, this is one Date Night that it wouldn't hurt to stay in and watch a movie on DVD. 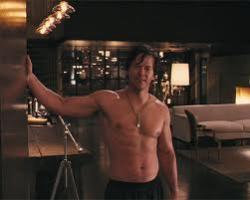 ...And will you, for the love of God, put on a fucking shirt?

My wife and I have a weekly date night.  Like Phil and Claire it has sometimes seemed routine.  We have sometimes skipped it for any numerous reasons.  We have sometimes taken the kids along.  To spice it up we once went to a nice place we had only heard of.  We were shocked that the prices were twice what we normally paid.  As Claire said, "If we are going to pay this much for crab it better sing and dance and introduce us to the Little Mermaid!"  Like Phil and Claire we learned, that routine and predictability can be okay, and no one had to shoot at us to learn that lesson.

I related to this couple and their mundane family issues.  Their jobs are frustrating.  Their kids wake them up and demand much of their time.  I agree with Scott, that, "...the setup to the plot tries to be humorously realistic, as soon as the Fosters pretend to be the Tripplehorns any sense of realism evaporates quickly."   This leads them to car chases, mobsters, drug dealers, crooked cops and a shirtless Wahlberg and his high tech computer.

All of that is entertaining in that it is fast paced and fun.  The problem is that the film sets up a very believable family with understandable issues and then throws them into an unrealistic action comedy.   Had they been bored traffic cops suddenly thrown into a high profile case I would have bought into it.  The moment they get up from the restaurant table the movie becomes a fantasy. At one point Phil climbs out of his moving car through the shot out windshield and into another, that is stuck to his going backwards.

Of course Date Night ends with the reaffirming of their love and commitment.  "I'd do it again you know? Us, you, me the kids, all of it. I'd do it again. I'd choose you every time."  Phil tells Claire.   That's nice, but I just wish it could have better balanced the realism and the fantasy.  Could this couple learned to appreciate what they have without the buddy cop plot line? 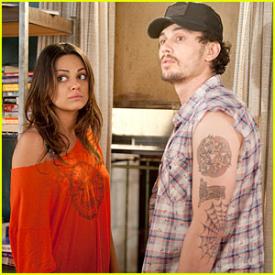 Mila Kunis and James Franco as Whippit and Taste have the funniest scene.

Exactly, this suburban couple’s adventure in the city is just too far fetched. It is definitely a fantasy and should have been explained as a dream at the end by maybe showing they fell asleep waiting for a table at the restaurant or possibly bumped their heads on something. Although it still manages to entertain, the action scenes and behavior of Phil and Claire goes so far beyond believability that it nearly ruins the picture.

Phil and Claire get around the city seemingly with ease and often on foot from "the" Central Park to Times Square to the West Village. They climb fire escapes, commit breaking and entering, and drive recklessly through a city strangely devoid of traffic and red lights before winding up in the East River. The climax at the strip club and on the roof involving the DA and a local big shot gangster is just too much.

The cameos are a highlight. Mark Wahlberg’s laid-back and perpetually shirtless Holbrooke Grant, opening his door and nonchalantly facing the zany goings on, is funny. James Franco (who seems to be in every movie lately) shows what a Movie Star looks and acts like in his one hilarious scene. I wanted the camera to leave Phil and Claire and follow Taste and Whippit instead.