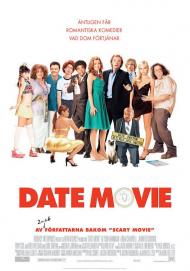 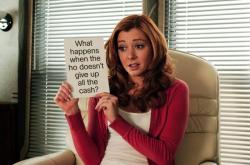 1980's Airplane started a type of comedy that has been going down hill gradually ever since. It remained successful through the Airplane sequel and the underrated Top Secret. It went slightly down hill with the Naked Gun series, but was revived fairly successfully with the first two Scary Movies. Scary Movie 3 and Not Another Teen Movie saw the fortunes of this type of comedy receding quickly again and Date Movie could be the final nail in the coffin for a while.

The surreal humor and satirizing of famous movies has given way to purely gross jokes and the imitation of famous movies. The jokes aren't parodies, they're simply references to and recreations of those movies.

Another aspect of the Airplane school of humor is to throw as many jokes at the screen as fast as you can so that if one fails you won't have to wait long for the next one. Date Movie also does this, only each successive joke is as bad as the one before it. If Airplane had an 8 out of 10 success rate with its jokes, Date Movie has the inverse with maybe 2 out of 10 jokes actually being funny.

Alyson Hannigan, who started out so memorably as Willow on the Buffy: the Vampire Slayer television series and who has now found success on How I Met Your Mother, has the unfortunate luck to be the star of Date Movie. Hannigan has the cuteness and the talent to pull off the lead in a real romantic comedy and shouldn't be wasting her time with this drudge. Her charms are mostly wasted here as she is swallowed by the mediocre jokes.

There are stereotypes in romantic comedies and it would seem that a satire of those stereotypes could make for a very funny movie. But that would require actual thought and wit, and it's so much easier to just try to cram in as many references to those movies as possible. When Harry Met Sally, Bridget Jones's Diary, The Wedding Planner, The Wedding Crashers, Napoleon Dynamite, Revenge of the Sith, Kill Bill Vol. 2, My Best Friend's Wedding, Meet the Parents, Meet the Fockers, Hitch, Say Anything, King Kong, Pretty Woman, Mr. and Mrs. Smith and My Big Fat Greek Wedding are just some of the many movies at least mentioned. 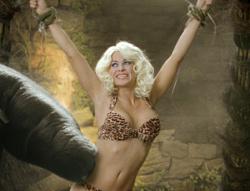 It is only the 7th movie I have seen so far this year but Date Movie could possibly be the worst film of 2006.

A baby that says "beatch" is not funny. A couple on a date that end up beating up a bum for fun is not funny. The one joke that I liked was overshadowed by a lousy one. During a parody of the television show The Bachelor, the host asks the bachelor to eliminate the girls he doesn't want to bang. I have often seen the commercials for The Bachelor and thought the exact same thing. However, the bachelor then pulls out a gun and shoots all of the girls except for one. I think that was meant as a joke. No one in the theater laughed but I am guessing the writers must have thought it was funny as they put it in the movie. Maybe they were high or something when they wrote it. I don't know but it, like most of the movie, did not go over well.

Fred Willard and Jennifer Coolidge are normaly very funny in almost anything they do. Here they have so little to work with that they both come up completely empty.

Like Scott, I think it is time to put a moratorium on satire film until someone who knows how to do it decides to make one.