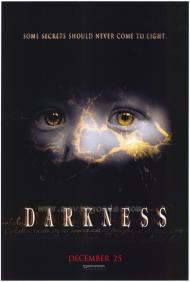 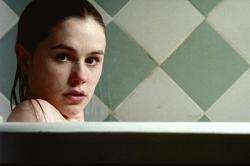 Darkness is one of those movies that forces you to ask, "What was the point of that?" Although it does have some creepy moments, the plot is simple and meaningless and the characters aren't developed enough for anyone to care what happens to any of them and the ending is totally ambiguous.

The plot revolves around one of the most overused devices in horror films. A family moves into a house that they don't know is haunted. And even when bizarre things start happening, none of them take it very seriously. Adding unoriginality to unoriginality, the member of the family to first make contact with the ghosts in the house, is the young son. About the only cliché this movie manages to avoid is having the house built on an Indian graveyard, although this is probably only because the movie is set in Spain.

Anna Paquin stars as the daughter, Regina, who is forced to take action against the spirits when her father starts cracking up and her mother dismisses all suggestions of supernatural activity. In fact, her mother (Lena Olin) seems completely oblivious to just about everything. When her son shows up with bruises all around his neck, she dismisses it as, 'boys being boys.' She's so ambivalent that for a time I suspected she had some connection to the spirits, but no, she's just a badly written character.

There are a few moments of true creepiness spread throughout the movie, but not enough to make this movie worthwhile. One scene of a ghost or demon (the movie never really makes it clear what it is) climbing on the ceiling over Regina is one of the best moments. Sometimes it pays to be Hitchcockian and only glimpse the villain, but this movie needed all the help it could get and more action and thrills could only have helped.

Except for the inclusion of Paquin, Darkness comes across more as a bad made-for-cable or straight-to-video movie than a theatrical release. Only, unlike some of those movies, this one's not even bad enough to be funny and it's not bad enough to hate. It's just not interesting enough to evoke any emotion except perhaps ambivalence.