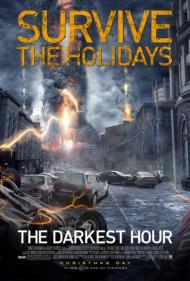 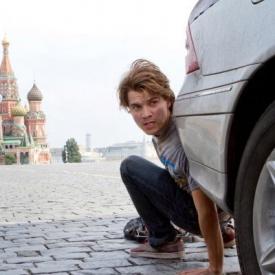 Emile Hirsch in The Darkest Hour

With the end of the year rush of award contenders being released it almost seems a relief to watch a mindless Sci-Fi action/monster movie like this one. It's just too bad it had to be quite so mindless. You'll definitely want to check your mind at the door and keep your tongue firmly planted in your cheek if you want to enjoy The Darkest Hour.

It hasn't been a good Christmas for Moscow in Hollywood as both this movie and the recently released Mission: Impossible - Ghost Protocol were at least partially filmed there and both of them feature large portions of the Russian capital being destroyed. In this case it's an invasion of electrically charged aliens who are looking to wipe out humanity and siphon off the planet's mineral resources. While the aliens are attacking the entire planet, the story here follows four American survivors in Moscow.

Sean (Hirsch) and Ben (Minghella) are two young software developers who fly into Moscow when the movie opens looking to make a deal. They meet up with photographer Anne (Taylor) and her assistant Natalie (Thirlby) in a bar and are just starting to hit it off when the power goes out across the city and golden lights begin to descend. The lights soon turn out to be deadly, invisible aliens who start to kill everyone. Sean and the others take refuge in the bar's basement and remain there for 5 days, emerging only when the food starts to run out. They find a deserted city with seemingly no other survivors, but what to do now, with aliens still prowling the city and seemingly no way to fight back?

The best things this movie has going for it are the alien visuals and the Moscow location. Unfortunately, all of the best visuals are shown in the previews which undercuts their impact and a lot of the tension. The first death should have come as a surprise. A golden light descends and a Russian policeman approaches it while the crowd holds its breath and then the policeman touches the light and is disintegrated to the shock of the crowd, but to the audience this is just something that we've seen (in my case literally) dozens of times in the previews.

It is the script that is the movie's real problem. It's filled with cliches, bad dialogue, poorly defined characters and plenty of plot holes. The alien invasion force's plan and weaknesses are both silly. With all of its advanced technology, why do the aliens come down in person to wipe out humanity? All they want is our mineral resources, so why don't they simply kill us all by bombing the planet from orbit? And are you seriously telling me that these beings can travel the vast distances across space but they can't see through glass?

Like most end of the world movies featuring a small group of survivors, you can be sure that some of the characters will die and some will survive and this movie follows that formula. Since the characters are such cliches, it's quite easy to predict who will live and who will die. This, accompanied by how much the previews gave away means that there are absolutely no surprises in the story at all.

The funny thing is that despite its many faults, I didn't hate this movie. Thankfully its running time is brief and some of it is so bad that it's almost enjoyable. If you can watch it in the right frame of mind and be prepared not to take any of it seriously then at the very least you shouldn't be bored by it. 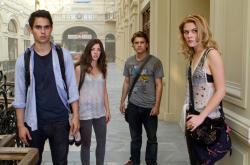 Scott wrote that it was quite easy to predict who will live and who will die.  The only one I was sure did not have long of this earth was Skylar.  The guy is an idiot and in his first scene we discover he stole the main characters business idea.   Screen writing 101, jerks rarely make it to the sequel.  I was not able to guess who else would die, but I never cared either.

As Scott noted, there is very little characterization.  Two young American guys go to Moscow in hopes of making a big deal and meeting some Russian girls.  Or as Sean says, "Getting drunk, laid and ending up in a Russian prison."  Sean is the laid back, slacker with the attitude.  It is the business deal of their lives and he wears a ratty jacket and no tie.  The deal may be important, but obviously not important enough for him to compromise his style for.

Ben is the brains behind their GPS night club idea.   In simplest terms and stereotypes, Ben is the reserved, conservative intellectual, while Sean is the liberal, slacker philosopher.  "No human society exists without booze or religion."  Sean tells Ben, who adds, "That's why I drink religiously."  With those insinuated personality traits, we are supposed to care about these guys and the two hot babes they meet.

As I am not a Emile Hirsch fan, I kind of hoped he would buy it sooner than later.  He has never made a film I truly liked.  He also seems like a douche in real life.  He, as well as some other celebrities, including Jessica Biel, hiked Mount Kilimanjaro in Tanzania to create awareness of the world's clean water crisis.  Really?  Would not a commercial shown on television around the world delivered the message better and with less time and effort?  I digressed there, but I really do not get actors who keep getting roles that could be played by any number of other actors of a similar age with more charisma.

The two girls are even more indistinct.  The hot blonde is a photographer who looks far too delicate to be the world traveler she claims to be.  The brunette keep staring at her cell phone as if it is a magic lamp that will suddenly produce  a genie to answer all her questions.  If these four were the last people on earth, their off spring would be attractive, but vacuous.

I am not sure what producer Timur Bekmambetov brought to the film, but it lacks the atmosphere and tension of his Night Watch and Day Watch films.  The Darkest Hour could have been a better movie with a different cast and a more polished script.  After a Russian survivor tells Sean they will not help him make it to his next stop, Sean says, "What is the point of saving people if you don't send them home?"   Was this script written in Russian and then translated (poorly) into English, because who talks like that?  The line doesn't even make sense within the contents of the story.   It is not the other survivor's job to send them any where.

The special effects are decent, and the pace is good enough.  However, from 28 Days Later to Stake Land, there are a plethora of end of the world films that are better than The Darkest Hour.