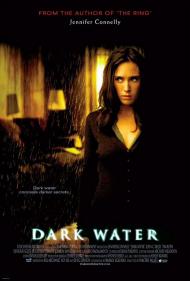 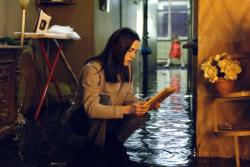 Dark Water, the latest in a series of Hollywood remakes of Japanese horror films is a taut psychological thriller that may become a victim of its own marketing. According to nearly every advertisement I've seen for this film, it's supposed to be scary and terrifying, and yet, while it does contain supernatural creepiness, its real strength is not the horror, but rather the inner-drama of its protagonist as she comes to grips with her past and uncertain future.

The plot revolves around Dahlia (Connelly), a woman going through an ugly divorce, who moves with her young daughter to a rundown apartment on New York City's Roosevelt Island. Not only is Dahlia forced to deal with all of the day-to-day problems that come with divorce and moving, but she must also confront the demons of her own childhood as well as the creepy goings on in her new apartment building, which include a continuous leak from the apartment above -- an apartment that has been empty for many months. High strung and afflicted with migraines, Dahlia's grasp of the difference between fantasy and reality is tenuous at best. Are there ghosts in the building, is her husband (Scott) trying to make her appear insane so that he can gain custody of their daughter, or is it all just a creation of her fevered imagination?

Certain elements of the film have been done many times before in the recent past, most notably, the young child who seems to be in connection with a ghost. And water, as the title implies, plays a large part in the story as it did in The Ring. This shouldn't be too surprising as the original novel this is based on was written by the author of The Ring. The movie's greatest strength therefore, lies not with its reheated horror elements, but with the richly developed characters and the fantastic cast of actors who inhabit them.

Leading the cast and dominating the story is Jennifer Connelly as Dahlia. As she's proven time and time again, Connelly plays intense women experiencing emotional upheaval of some form or another better than anyone working today. But even the smaller parts are fully developed. John C. Reilly provides comic relief as the realtor who first shows Dahlia the apartment. When she points out that it's only a one bedroom rather than the two bedroom advertised, he points out that the living room is big enough to be two rooms, or is what he likes to call, "A dual purpose room." Tim Roth plays the eccentric lawyer who takes on Dahlia's custody case, while hiding his own emotional baggage. And rounding out the cast of adults is Pete Postlethwaite as Veeck, the building's creepy super. The fact that all four of the main actors have been nominated for an Oscar is certainly something you don't see in your average horror film and their performances definitely add weight to the story.

The movie also sets a suitably creepy tone. There is a sense of urban isolation that permeates the film, although it takes place entirely in crowded New York City, almost always the characters are alone, even when surrounded by people. Director Walter Salles (The Motorcycle Diaries) also makes great use of shadows and silence to create tension.

As a horror film, Dark Water is too much of a retread of recent films, but as a well-acted psychological thriller, it shines.