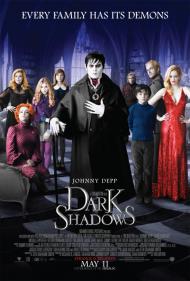 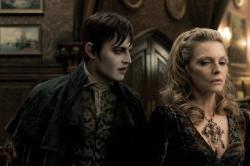 I'm too young to have watched Dark Shadows during its original run, but I did watch it in the 1990s when the SciFi channel used to show reruns of it. I can't say that I was a huge fan, but I enjoyed it well enough. It was obviously made on a shoestring budget, but it had a certain gothic charm. What it lacked in production value, it made up for with earnestness.

This Tim Burton adaptation is the exact opposite of the series. It has very high production values, but keeps its tongue very firmly in its cheek. Reportedly both Burton and star Depp were big fans of the series, but from the way they spoof and make fun of it here, you wouldn't really know it.

The plot of the movie echoes that of the series, with some twists. It centers on the Collins family in Maine. They're quite rich, having founded the town of Collinsport in the 1700s and built up a huge fishing enterprise. During the prologue, we learn how Barnabas Collins (Depp) was cursed by a witch, Angelique (Green), whom he had spurned, and then locked inside his coffin for 196 years until 1972 when the movie begins. The rest of the plot, and there isn't much of one, revolves around Barnabas coming to grips with the 1970s and his efforts to reestablish the Collins family good name.

Although there are some funny elements throughout the movie, it's never exactly a laugh riot. All of the best jokes are given away in the previews anyway. Depp is mildly amusing, and the supporting cast provides laughs. A growing up fast, Chloe Grace Moretz plays a 1970s teen with dry sarcasm and an under-used Helena Bonham Carter is good as the drunken family doctor. Michelle Pfeiffer is quite good as Carolyn Stoddard, the family matriarch, but at times she seems to be starring in a different (and better) movie, as if Burton forgot to tell her this was a comedy.

There's a disjointed feel to the plot. It's more like a series of ideas and vignettes strung together rather than a cohesive story. Some subplots never seem to go anywhere and serve little purpose. Johnny Lee Miller plays Roger Collins, the father of young David, and he's not exactly an ideal parent, but his scenes provide few laughs or emotional resonance. Likewise, the love story angle between Barnabas and Victoria feels tacked on just for the sake of it. They share no chemistry together and their relationship brings nothing, neither laughs nor heat, to the table. A werewolf is included out of nowhere at the 11th hour for no discernable reason other than the fact that the original series featured werewolves. Even the very ending suggests a twist or a sequel idea, but in a not very interesting or shocking way, even though it's filmed as if it should be.

As usual with Burton, everything looks good. Collinwood, the creepy old family mansion, is brought to glorious life in a way the original set designers could only dream about. The costumes, the cars and the music are all carefully presented to scream 1970s.

A nod to the original series is included in the ball scene. A group of elderly guests, comprised of the series actors, arrive and are welcomed by Barnabas, to which they reply, "Thank you for having us." Fans of the original may find it poignant as Frid, who played Barnabas on the show, passed away in April of this year.

I was disappointed when I learned that this movie was going to be a comedy.  After seeing it, I'm even more disappointed. It's not that I'm such a fan of the original that I think it's sacrosanct, but just that if you're going to spoof something, at least do a better job than this. 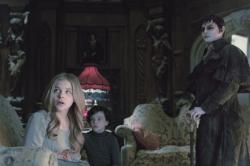 Dark Shadows has a Vampire living among his human relatives, yet all of the jokes are based on the fact that Barnabas is two hundred years old and is struggling to get along in 1972. The soundtrack, clothes and pop culture references such as The Carpenters and Love Story by Erich Segal, are all the basis for jokes.

At one point Barnabas asks, "How soon can the horses be ready?" Elizabeth responds, "We don't have horses, we have a Chevy." Johnny Depp gets most of the lines worth remembering. When discussing his attraction to Victoria, he says, "She has the most fertile birthing hips I've ever laid eyes upon."  When answering Angelique's offer to buy him out, he says, "Here are my terms: Goest thou to hell, and swiftly please, and there may Azmodaeus himself suckle from your diseased teat!"

The film climaxes in an exciting, special effects filled action sequence. It is however, not enough to make up for the lack of plot or intrigue. Tim Burton mixes drama, comedy, horror and camps it all up, creating a very unsatisfying mess.

The cast of Dark Shadows.

When this movie was released last year the general consensus on it (including my brothers' opinions) was that it wasn't very good. Needless to say I went in with low expectations. While it's certainly not a classic I enjoyed it more than Scott or Eric did. Having never seen the original series I had nothing to compare it to and I liked the offbeat dark humor. It starts off quite entertainingly as we are introduced to the various characters, even if the plot sort of runs out of steam by the end and (like most modern movies) it relies a bit too heavily on the crutch of CGI.

I laughed when he first meets the family at the dinner table and mentions he can tell the cutlery being used isn't the original family heirlooms because if his fork had been actual silver he would have burst into flames at the slightest touch. Depp's droll performance really sells these jokes. When he opens a secret vault to prove he's the rightful owner of Collinwood an embarrassed Elizabeth explains, “That's where I keep my macrame.” “A disgraceful misuse, madam!” says Barnabas. The making-out on the ceiling scene is one that you either find funny or just plain stupid. I'm in the first category. I thought it was hilariously silly and a fresh take on an old cliche.

I agree with Eric that Burton mixes drama, comedy and horror in a campy chowder but rather than finding it an unsatisfying mess I thought the flavors gelled nicely. Thanks mostly to Depp's wonderfully hammy performance. Listen to the way he says, “I have spent the last two centuries locked in a box, with nothing to keep me occupied but a glimpse into the dark shadows of my soul.” It is simultaneously comic and tragic.

Dark Shadows has several flaws too. I thought the climax a bit cheesy. This shouldn't be an action-driven vehicle. Also the ending lacks any real sense of romance or destiny since, like Scott, I found the relationship between Barnabas and Victoria passionless and the actors share zero chemistry together. I also dropped half a star for the inclusion of a projectile vomiting sequence. A gag (literally) that was funny once (in Stand By Me) but should never dirty the screen again.