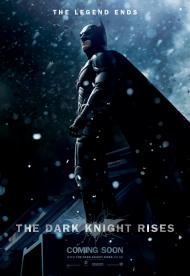 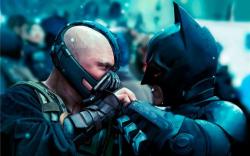 Tom Hardy and Christian Bale in The Dark Knight Rises

I have so enjoyed this latest Batman incarnation that I was sad when I heard The Dark Knight Rises was to be the finale to the Chris Nolan/Christian Bale Batman series.  Now that I have seen it, I understand that it is time for someone else to take over the helm and lead.

The Dark Knight Rises is a bit long in the tooth.  It is 2 hours and 45 minutes.  As the movie opens it has been some eight years since the events of the second film.  Batman is in retirement and Bruce Wayne has become a recluse.  Odd that no one in Gotham connects those two things together.  As the title informs us, Batman comes back to battle Bane.  However, it takes about an hour for Batman to make an appearance, and then his scene does not last very long.

That is one of the problems with The Dark Knight Rises.  Although this is his movie, Batman practically becomes a supporting player.  It ends up being Bane's story.  Catwoman has nearly as much screen time as Batman.   Meanwhile, Commissioner Gordon takes a back seat to a beat cop.  Alfred is only in a hand full of scenes.  About half way through the film, I started to think I was watching Inception as the cast from that film so dominates this one.   The final scene confirmed that I was in fact watching Inception.

Not only did Nolan pack the cast with friends, he also threw in some liberal politics.  When Bane takes over Gotham he makes a speech about class envy that would make President Obama proud.  Bane announces, "Gotham, take control... take control of your city."  He encourages the citizens to take whatever they want from the wealthy of the city.  We are then shown scenes of the rich being robbed and thrown out into the streets.  It has damn little to do with the actual plot.  Selina Kyle, a thief, sanctimoniously tells billionaire Bruce Wayne, "You think this can last? There's a storm coming, Mr. Wayne. You and your friends better batten down the hatches, because when it hits, you're all gonna wonder how you ever thought you could live so large and leave so little for the rest of us."   So being rich, in and of itself is a crime?  Gee Nolan, are you feeling guilty for all the money you have made recently?

The cast is solid, with Bale moping about until Catwoman and Bane inspire him to get a life.  Hathaway is sexy as Catwoman, but then she usually is good in anything she does.  Hardy makes like Bronson (2008), his break through role in which he put on a lot of weight and muscle to play a psychotic criminal.  Thank god he did not repeat the full monty scene.

The real star of the movie is Joseph Gordon-Levitt.  He runs about the film poking his nose into everyones business.  One minute he is talking to Wayne and the next Gordon.  He seems to pop up everywhere.   Gordon-Levitt is a good actor and has come a long way since "Third Rock from the Sun," but why is he doing so much of the leg work for the stars?

The Dark Knight Rises will please the fan boys.  Just as in the comic books, Bane breaks Batman's back.  However, once you remove yourself from the excitement of it all, you may start to realize that it was a lot of smoke and mirrors.  Yes, there are some twists at the end and the whole plot point of an entire U.S. city being held captive for months without any outside interference is ridiculous.

There is plenty of superhero action and it retains the dark tone started in Batman Begins.  However, taken as a whole, The Dark Knight Rises does not remain a consistently enjoyable film.  With the cast of Inception running amuck and a few questions going unanswered, it is not as great a finale as it could have been. Adieu Christopher Nolan, this is not the best film in the series but, as a whole, you have done The Batman justice. 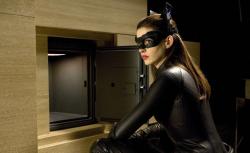 Anne Hathaway as Selina Kyle, aka the Catwoman, in The Dark Knight Rises.

The Dark Knight Rises is a good movie, but yes, it is possible to have too much of a good thing. At 2 hours and 45 minutes, it is unforgivably long. It's actually misnamed. It should have been called, The Dark Knight Slowly Gets to His Feet, Falls, Rises, Falls Again, Rises and Then..... Well, okay, if I finished the title I would be giving the ending away, but you get the idea.

As Eric pointed out, there is a large cast of characters. This isn't The Avengers. It doesn't need to be about a group of heroes. Batman isn't supposed to be part of an ensemble. He needs to be front and center and the star of his own movie.

Now, having said that, I do want to point out that like Eric, I enjoyed Anne Hathaway as Selina. She's sexy as hell and makes a great Catwoman. Likewise, Joseph Gordon-Levitt does a good job as Blake, although too much time is spent on his back-story and all of the scenes with him and the children from the orphanage could have been cut. Gary Oldman does another fine job as Commissioner Gordon, but his action scene at end would have been more realistic had it been given to Blake. Matthew Modine's character should have been cut entirely. Michael Caine is brilliant, of course, as Alfred and brings the most heart to the film.

Tom Hardy is physically imposing as Bane, but he's an uninteresting villain. He's a blunt instrument with no nuances. His plan to take over Gotham makes little sense, even at the end when the truth and motive for his plan is revealed.

Eric, normally I would just let your rantings about liberal politics slide, but I think you're dead wrong this time. Yes, Bane makes a speech about class envy, but hello, he's the villain, not the hero and a psychopathic villain at that. Yes, Selina tells Bruce Wayne there's a storm coming, but again, she's a thief. You don't think she's going to try to justify her lifestyle? That doesn't make her right. The hero of the movie is a capitalistic billionaire who uses his money to take personal responsibility for the safety of his city. Does he leave his fate in the hands of the government? No, he acts alone. His entire goal is to defeat the man who espouses the politics that you so detest.

As this movie went on and on, I did wonder if Batman would die at the end of it. Don't worry, I won't give the ending away, but of course it doesn't matter if he does or not. Obviously Warner Bros. isn't going to let the character die, even if he does in this incarnation, and I'm not saying he does, but as is well documented, this is Christian Bale's last appearance in the role in any case. So how long until they reboot the series? My guess is not that long.

This is a well made and entertaining movie. The action is good and the cast is superb. The fanboys and girls will lap up every second of it. The more casual fan though, will be more than ready for the end by the time it finally rolls around. Some of it could and should have been saved for the inevitable extended special edition of the DVD. 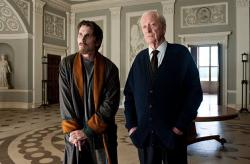 Christian Bale and Michael Caine in The Dark Knight Rises.

Yes at times the villains sound like the Occupy Wall Street crowd but Nolan certainly doesn't make a point of espousing this view. As Scott pointed out, Bruce Wayne himself is a billionaire and he's the hero, so I'm not sure how Eric reached the conclusion that Nolan was saying, “being rich, in and of itself is a crime”. If anything he is saying the opposite, that only psychopaths and thieves would think this way.

I'm not the fan of superhero movies that my brothers are. Quite frankly I was bored by this overly long, and often dull, movie. Did we really need to see Bale attempt to climb up out of that prison twice, and fail, before his final (and predictable) triumphant climb, sans rope?

The plot device of keeping the city hostage for months is ludicrous. We are supposed to believe, despite all of the bridges and tunnels being blocked off, that somehow there is enough food for 12 million citizens to survive. Even if they airlifted supplies in, it would be a massive undertaking that is never shown or explained.

The cast is good. Christian Bale is the best actor to don the cape and cowl. He brings serious gravitas to the role. Anne Hathaway is simply the best Catwoman ever. If you'll forgive me, she's downright purrfect in the role. I agree with Scott that Michael Caine, despite looking quite frail and elderly (see photo), brings real heart to the movie. He remains a great, great actor.

The final half hour or so is wonderfully entertaining. The final 15 minutes is filled with surprise revelations (at least if you haven't read the comic books), but overall The Dark Knight Rises is the most disappointing movie of the summer thus far.