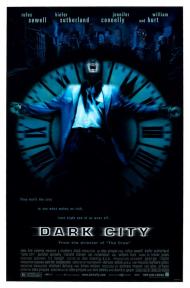 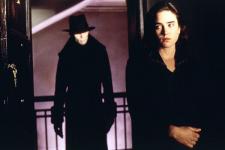 Dark City is the child of Bladerunner and the older brother of the The Matrix. Like those films it questions what is reality and asks if we can trust our memories. Also like those movies it takes place in a dark and moody urban setting. Although where Bladerunner is set in a gloomy future, The Matrix in a gloomy present, Dark City appears to be set in the gloomy past. Much less famous than its more successful siblings, Dark City is a film that deserves more recognition and success than it has received.

Rufus Sewell plays John Murdoch, a man who wakes up in a hotel room with a dead prostitute and no memory of how he got there or who he is. He soon learns that he has a wife and that a mysterious group of bald men are hunting for him. There's also a doctor and a detective looking for him as well. The gist of the plot is John trying to learn not only who he is, but just what the hell is going on in the world.

It's a difficult plot to discuss without giving away spoilers. The city, the cars, the clothes and the music all seem to place the story in the 1930s or 40s, but quite quickly you can see that probably isn't the case. As I said there are connections to The Matrix and Bladerunner so you might be able to guess where the story is headed, but not the details.

Visually the movie is quite striking. It verges on the Gilliamesque. Director Alex Proyas proved he has a visual flair with The Crow and he takes his vision to a higher level here. He sets a moody and gloomy tone that permeates the entire film. It's not as polished as The Matrix and it seems as though there should be more than one year between the release of this and that film. Interestingly, The Matrix used some of the sets from Dark City most obviously during the opening scene with Trinity on the rooftops. Despite its lower budget the setting and the special effects are still striking and memorable.

The cast is quite good although character development isn't the movie's strongest point. Sewell does a good job in the lead. Sutherland's performance borders on overacting, but somehow it suits the part. Jennifer Connelly, at the height of her beauty, looks good and even gets to sing a couple of torch songs. The villains, led by Richard O'Brien of Rocky Horror fame, are creepy and well done.

Smart and stylish, Dark City is a film that has been overlooked but definitely deserves to be watched or rewatched.

Dark City is a stylish blend of science fiction and film noir. The reluctant hero, John Murdoch, suffers from amnesia and gets caught up in a dangerous world as he tries unraveling the mystery of his identity and details of his forgotten life. The supporting characters are all familiar movie archetypes. There is the sultry torch singer, the hard boiled detective, the mad scientist and the enigmatic trenchcoated bad guys known as the “Strangers”.

Dark City itself looks like an indistinct blend of panels in a gritty graphic novel and the studio backlot at Warner Brothers in the 1940s. As the movie unreels, its urban secrets are cleverly doled out by the director. Although we are never given complete answers to the why's and wherefore's of Dark City and its inhabitants, the denouement is satisfying enough.

At the center of the mystery seems to be a nearby community called Shell Beach. John Murdoch possesses a fading postcard from the place and has distinct memories of playing on the beach as a child. If only John can find his way there he is certain he'll be able to get his memory back. But everyone he asks is unable to remember the directions out of Dark City. John Murdoch's search for Shell Beach, his idyllic childhood home, is both poetic and symbolic. But of course nothing is as it seems.

The villains are quite creepy. Not only did Alex Proyas cast Richard O'Brien, he also based Mr. Hand loosely on the androgynous Riff Raff, his character from Rocky Horror, although without the campy humor. The little boy Stranger is particularly disturbing.

Dark City is definitely best enjoyed without much foreknowledge of the story. I recommend watching the 2008 director's cut over the original theatrical version as the latter includes some early voice-over narration by Kiefer Sutherland's Dr. Schreber that gives away a few key plot points. If you've never seen Dark City it is well worth checking out. It has developed quite a cult following since its initial release in early 1998. Something tells me it will continue to grow in stature as the years keep rolling by.

Scott compared Dark City to The Matrix and Bladerunner, and I agree, only I would add The Truman Show and even George Orwell's, 1984 to that list.  Like all of those stories, Dark City features a Christ/God figure.  John Murdoch represents the lone man trying to find his place in life while questioning the meaning of it all.

Like Christ, John Murdoch collects disciples, such as his wife, the detective and the doctor.  He even has his own Mary Magdalene, in the form of a pleasant blonde prostitute.  Like Satan, the Strangers are after man's soul, with the ultimate battle being over free will.  John even ends up restrained, with his arms out to the side, like Jesus on the cross.

Although hardly original, I liked the look of the film.  Making it a 1940's style film noir helps the movie from becoming easily dated.  Jennifer Connolly did not do her own singing, but she looks good as a night club singer performing "Sway".  The special effects hold up fairly well with the shifting buildings and John flying.

I also liked the cast.  Sewell has a unique look in his eyes.  He comes across as if he could go either way, good or bad.  Scott thought Sutherland overacted, but I liked him.  He played he Doctor like a blonde Peter Lore.  "These do bring back memories. This one is still warm. What is it?"  Jennifer Connelly looks good but has very little to do.  The villains are creepy as hell, and like Patrick, I found the child Stranger to be the creepiest.

I never saw Dark City when it first came out.  Hell, I cannot even remember when it did.  Patrick mentioned that it has since developed a following, and it certainly deserves it.  Dark City is an action science fiction film with a really nice mystery waiting to be discovered.