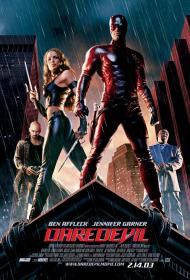 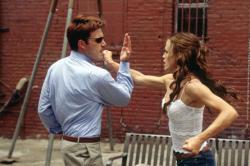 The recent glut of super-hero based movies was bound to produce some clunkers.  X-Men and Spider-man both showed how good the genre can be.  Daredevil shows just how bad it can be, with poor dialogue, mediocre acting, and moments of pure melodrama.

Daredevil, one of Marvel Comics less famous heroes, is a nighttime vigilante who protects his chosen turf against all criminals.  His turf being the Hell's Kitchen section of New York City.  Blinded in a childhood accident, Daredevil's other four senses were enhanced to the superhuman level, granting him extra strength, agility, and an almost radar-like sense.  Not above killing to protect the 'innocent', Daredevil does what he can to make the city a safer place, centering most of his efforts against the mysterious "Kingpin", a shadowy figure who controls all of the crime in New York City.

The movie begins with a wounded Daredevil perched atop a church.  A good example of what is wrong with this movie.  Later, the story flashes back to how he got there, but more on that soon.  Suffice to say he was wounded in a fight atop a nearby building.  Stabbed and bleeding, our hero takes the time to crawl to the front of the church and cling to a church spire in a picturesque manner that makes for a very stylish opening shot, before climbing down into the church itself.  This posing for a quick style shot happens quite often throughout the movie.  For a blind man, he certainly understands the value of a good profile, even if he doesn't understand that a stab wound could be better cared for by getting help than by taking the time to pose against a night-scape.

In keeping with this 'shove the story into the audience's face', we also quickly learn who the Kingpin (Michael Clarke Duncan) is and his simple motive of blaming all of his crimes upon his partner, after killing him, so that the police will stop suspecting him.  It's a good thing the script says he's a criminal genius, otherwise I might not have realized that framing your business partner and confirming to the Police that the City's Criminal Mastermind worked everyday in your offices and causing them to search and subpoena all of your records and business papers, was such a good idea.

For the actual killing of his partner, the Kingpin hires Bullseye (Colin Farrell), an Irish murderer who has such good aim that he can kill a man by throwing a straightened paperclip into his windpipe.  Forget guns or knives, this guy kills with office supplies.

Meanwhile, Daredevil's alter-ego, the blind lawyer Matt Murdock, falls in love with Elektra Natchios (Jennifer Garner), who just happens to be the daughter of the Kingpin's Partner, and also, of course, a black belt Martial Artist.  Her Meeting with Matt, which I guess is supposed to be sexy and exciting as they spar with each other, elicited instead, a laugh from the audience.

The plot moves on, and without giving too much away, a battle takes place between Bullseye and Daredevil and soon we are back in the church with the wounded Daredevil and the movie moves to its inevitable climax.

The shame of this mess of a movie is that it could have been quite good.  Ben Affleck has a certain charm and the Daredevil is an intriguingly dark hero, at first.  He actually kills, which is a change from the sanitized super-heroes we're used to.  Tormented by the constant barrage of sound he is surrounded by, he must sleep in an isolation tank just to block it out.  There are times when he seems as insane and as violent as the criminals he fights.

The script however, never lets an intriguing moment get started.  Rather than spelling out everything, if they had kept Daredevil in the shadows so to speak and let us discover his secrets more slowly, the movie would have been much better.  But instead we are spoon fed the entire plot from start to finish.

I was even more shocked at just how bad this movie was when I realized that it was written by Brian Helgeland, who also wrote L.A. Confidential and A Knight's Tale.

I wondered before seeing this movie just why such a big super-hero movie would be coming out in February.  Now of course, the answer is obvious.  Pitted against a slew of good block-busters, Daredevil would have failed miserably.  Being the only big movie of the month, it has a chance at least of earning back some of the money wasted on its making. 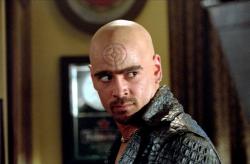 I remember looking at a Daredevil comic when I was a kid. I particularly remember one page where it showed him swinging and throwing his body gracefully around the cityscape. He looked like a professional gymnast. Then I read that this character was blind. I was intrigued.

However, I felt the whole concept was a direct lift from Batman. Daredevil fights evil in the city at night in a mask with horns on it. Okay Batman has ears on his mask but the similarity is nonetheless. Either way, I never became a huge Daredevil fan.

With this movie I find even more similarities. Both had parents killed while they were young. Both were so scarred by the event that they choose vengeance as a superhero. This movie, minus the blind angle. could have just as easily been a Batman movie.

However, the difference is that Daredevil has better villains than any of the over the top clowns Batman has ever fought. King Pin is just a big baddy. He is pretty much an overweight Lex Luther. He has others do his dirty work as he sits in his office atop some skyscraper. Until of course the climax where he has to go mano a mano with Daredevil.

Colin Farrell finally gets to use his real accent as the Irish assassin Bullseye. His part is small and he is the closest this movie gets to going over the top. But he doesn't even get close to Willem Defoe's pathetic Green Goblin screaming "Finish it." to a praying Aunt Mae.

That is actually one of the best things this movie has going for it. No campy villains. The entire mood of this movie is deadly serious. I was surprised by some of the death in this movie. Other than some meager humor between Matt Murdock and his partner there is little humor to be found. This is one of the darker superhero movies made.

Scott did not like the scene with the wounded Daredevil perched atop the church. Scott, he is dressed as a devil and he is hugging a cross. Do you think just maybe the director was going for some symbolism?

Okay Scott, I agree with you on the wounded scene. Daredevil gets hurt and can't help Elektra fight. Somehow he gets the energy up to swing across the city to the church, where he again collapses. Then he suddenly finds the energy to do battle with Bullseye and then Kingpin. But this is a superhero movie. How many action movies have you seen where the hero gets shot or stabbed only to recover at the last minute in time to save the day? It's an action movie cliché but a forgivable one.

What sold Spiderman so well was the accessibility and awkward charm of Tobey Maguire's Peter Parker. Ben Affleck's Matt Murdock lacks in charisma. Whereas Peter Parker yearns for love. Matt Murdock runs from it. He keeps his law partner, the priest and whatever girlfriend he has at a distance. Parker is thrilled with his powers and enjoys the superhero life. Murdock just seems like an inmate forced to work. He goes out at night to rid his neighborhood of bad guys, but he doesn't really seem to enjoy doing it.

The stand out in this movie is Jennifer Garner as Elektra. She is one hot action babe. Her role should have been bigger. I have never watched a single episode of Alias, but I will now.

This is a darker, more dramatic superhero movie than most. I think a few more lighter moments may have added some charm. But then again it may have changed the mood too much. This is the film that all of those Batman movies should have been. 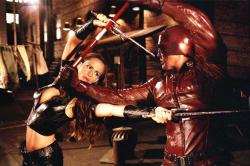 Clearly both my brothers had strong and indepth opinions on this movie; Scott hated it and Eric loved it. As usual (being the least fan of the genre) I am writing the third review for a superhero movie. I have to agree with Scott that Daredevil is pretty awful. In fact the only thing about it that I found entertaining was Colin Farrell's deliciously psychotic performance as Bullseye. Unfortunately he is not given nearly enough screen time, but while he is there you cannot take your eyes off of him, looking as he does like a late model Charles Manson. He is able to find the underlying humor in the role without losing any of the danger.

The scene Scott mentioned where Matt meets Elektra is unintentinally hilarious. I don't know who thought the sight of them staring each other down while balancing on a seesaw was a good idea. It comes across as just plain ridiculous and doesn't fit with the 'dark' mood of the rest of the movie.

As for Ben Affleck, he comes across as completely bored, delivering his dialogue in a starched monotone.

2003 turned out to be a smelly year for the Marvel movie franchise. Daredevil and Hulk both stunk up the screen. It's a good thing they have X-Men and Spiderman to fall back on.