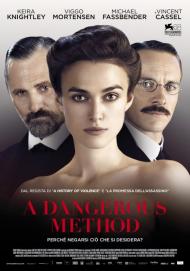 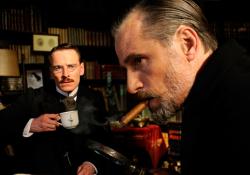 Michael Fassbender as Carl Jung and Viggo Mortensen as Sigmund Freud in A Dangerous Method.

I suppose when you are a psychoanalyst that you must remain detached and aloof from your subjects so that you can keep a clear and objective mind about them. However, when you're watching a movie, you want the exact opposite. You want to be caught up in the character's world and problems. This movie however, which is about the early days of psychoanalysis (or the Talking Cure as it was then known), plays everything very coldly and raises no real emotions at all. I was left completely cold by it.

Michael Fassbender stars as famed psychologist Carl Jung. The film covers the years from 1902 to 1913. When the movie begins he is entrusted with the care of Sabina, a new patient at his Zurich clinic, played by Kiera Knightley. Sabina is hysterical when she is brought in and Jung decides to try the Talking Cure on her that Sigmund Freud has been recommending. Jung learns that Sabina was abused as a child, but what really bothers her is that the spankings she received caused her to become sexually excited.

After her symptoms are relieved following this revelation, Jung communicates his success to Dr. Freud (Mortensen) and the two strike up a friendship that is tested over the years by Jung's more progressive ideas and Freud's strict sexual interpretation. Their relationship is the most interesting aspect of the film and should have been the movie's centerpiece. Mortensen brings some life to the proceedings and their rivalry. Their differences aren't strictly professional. Jung was married to a very rich woman and lived in luxury in Zurich, while Freud and his large family were crammed into an apartment in Vienna. Jung was a protestant while Freud was Jewish.

Jung also begins having an affair with Sabina. Their sex, as you might expect, features spanking. Far from being sexy though, these scenes are filmed as clinically as everything in the movie. Any sexiness from the moments are removed by Knightley's emaciated, borderline anorexic appearance and Fassbender's stoic indifference. They are some of the least passionate sex scenes ever put on film.

Fassbender, whose career is red hot right now, is fairly dull as Jung. I don't know whether this is because of Cronenberg's direction of Fassbender's own performance decisions, but either way, his Jung is a difficult character to warm up to. And as he's the star of the film, despite Knightley's top billing, this doesn't do the movie any favors.

I imagine students of psychology might find this movie fascinating and there are certain historical elements that are quite interesting. As a story however, the script is quite lacking. It needed more passion or tension. Any kind of emotion would have been welcome. Even Jung's wife is complacent about his affair. "Did you think I would give you up without a fight?" she asks at one point, but perfectly calmly and with little sign that's she's actually prepared to.

Without that spark of emotion I found it difficult to keep my attention on the screen. It's a pity really because there certainly seemed to be plenty enough going on to make a good a movie out of, this just isn't that movie.

Keira Knightly getting spanked by Michael Fassbender in A Dangerous Mind

For a film featuring such brilliant minds, I was expecting so much more. As Scott wrote, we never get under the skin of any of these people. Jung and Spielrein have an affair, but I never felt anything for them. Jung spanks her to get her off but we are never shown him lusting after her. At one point he says to her, "My love for you is the most important thing in my life." blah blah blah. He never acted as if those words were even remotely true. He eventually replaces her with another mistress.

One of my favorite quotes of Carl Jung is, "Everything that irritates us about others can lead us to an understanding of ourselves." This man had such foresight that he was one of the first to write, "The healthy man does not torture others - generally it is the tortured who turn into torturers." He said this years before it became common knowledge that abusive adults were themselves abused as children.

Sigmund Freud is also good for a quote or two, such as,“The first human who hurled an insult instead of a stone was the founder of civilization.” However, some of Freud's sexual observations are not as accurate as he may have thought. "No one who has seen a baby sinking back satiated from the breast and falling asleep with flushed cheeks and a blissful smile can escape the reflection that this picture persists as a prototype of the expression of sexual satisfaction in later life." That thought never occurred to me.

As groundbreaking as Jung and Freud were, Spielrein was as well. She was the first female psychoanalyst. She went from being a patient of Jung's, to a student, to his lover and then to a published psychoanalyst.

With three such personalities in one film, and sex a constant subject, this should have been a far more interesting film. Agreeing with Scott, the emotions are all held in check, leaving us to guess why Jung was banging Spielrein when he does not seem particularly turned on by her spanking fetish.