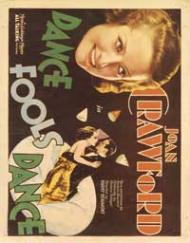 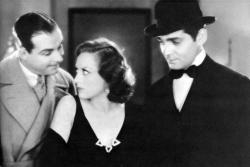 Dance, Fools, Dance is an example of the grittier side of pre-Hays Code Hollywood. It stars Joan Crawford and William Bakewell as Bonnie and Rodney Jordan, two very rich and spoiled siblings. When the movie starts they are attending a party on a yacht off the Chicago shore of Lake Michigan. Just for kicks all the people at the party strip down to their underwear and dive into the water.

The next morning at the breakfast table their father delivers my favorite line in the movie when he asks Bonnie… "Must you smoke before breakfast?" Later that fateful day the stock market crashes. Under the unexpected stress of destitution their father has a fatal heart attack, leaving his unprepared children to fend for themselves. Bonnie follows the straight and narrow, getting work as a lady reporter for one of the local papers. Her brother, however, falls in with the wrong crowd and winds up bootlegging for a rough gangster played by Clark Cable in his pre-mustache days.

Rodney witnesses a gangland murder and nervously spills the beans to another reporter. Gable, at his most hard-boiled, forces Rodney to prove his loyalty by gunning down the reporter in cold blood, or get shot himself. As it turns out the guy Rodney murders just happens to have sat at the desk next to sister Bonnie. You guessed it. Bonnie goes undercover for the newspaper as a dancer in one of Gable's nightclubs in an attempt to catch the killer. Not realizing it is her younger brother.

Dance, Fools, Dance crackles with snappy dialogue and rushes along at a peppy pace. It is full of old Hollywood clichés but with the talents of Crawford and Gable, in their first screen appearance together, it all works. Though their screen time together is limited to under twenty minutes it dominates the movie. She sparkles and struts around, he barks orders and manhandles women.

As I watch more and more pictures from the early thirties it is fast becoming my favorite movie era. Dance, Fools, Dance, while not a truly great movie, is fun to watch and easy on the eyes thanks to its charismatic stars. 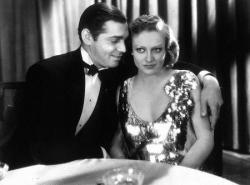 The early thirties is definitely my favorite movie era, at least from the Golden Age of Hollywood. There's an adult frankness about those Pre-Code films that is quite refreshing. It gives this movie an edge and maturity that it would otherwise have lacked. Crawford's character, Bonnie, for example is allowed to have premarital sex at the beginning of the film and her bosses at the newspaper basically pimp her out to get the scoop on Jake (Gable). The one area it shies away from is blood. There are several shootings, but no blood is ever seen. This is most noticeable in the final gunfight.

The plot features two fictionalized versions of real life events. Jake's gang slaughters a rival gang in what is clearly based on the Saint Valentine's Day Massacre. And the reporter that Bonnie's brother guns down is based loosely on Chicago Tribune reporter Jake Lingle, who was murdered by gang members in 1930, although the real Jake was a shady wheeler dealer who was actively working with the mob and not the noble good guy as he is in this film.

I agree with Patrick that the scenes featuring Gable and Crawford together are the highlight of the film. Gable played a villain in several of his early films and he made a good one. He was tough and charismatic, which is a good combination for a movie bad guy. Crawford brings beauty and strength to her part. She has to resist Gable's advances in the film, but you can't deny the chemistry between them. They play very well off of each other.

As Patrick wrote, the plot features plenty of cliches. It's also overly melodramatic and fairly predictable. However, the performances by Gable and Crawford cover up most of the film's flaws. It's also just an hour and 20 minutes long and so is never given a chance to wear out its welcome. Its charms far outweighs its weaknesses.

Joan Crawford showing off her gams in Dance, Fools, Dance

My brothers wrote how this is a pre code film, with Scott mentioning how Joan Crawford’s character is allowed to have premarital sex. It is subtle but obvious. When Lester Vail enters her room, she gives him a knowing smile as to the purpose of his visit, which is of course for sex. He tells her he is in love with her and asks her how about it. He then asks if she is going to make him wait until a wedding before she tells him she loves him. She then smile and coos, “I believe in trying love out.” They kiss and the scene fades.

Early in Crawford’s career, she often played a party girl or a woman of less than high moral standards for the time. In real life her reputation was not much better. Long before Marilyn Monroe, Joan Crawford posed for nude pictures before becoming famous and hers were far more scandalous. Since we are on the subject, Crawford’s character also brought to mind another actress who once posed nude. While working at the Newspaper, Crawford makes like Margot Kidder as Lois Lane. She even has a line where she asks the guy next to her, “How many “L”s in parallel?”

My brothers both wrote how Gable and Crawford had chemistry. I agree, but Gable never met a leading lady he did not look good with and he starred with almost all of them. This is not Gable's best work though. He would soon develop into a much better actor. His charm however, is already there. Take note of the lustful look Gable gives Crawford during her dance number, wearing a scandalous miniskirt.

After her dance, she sits at his table and they share some extremely suggestive dialogue. Gable leans in close and says, “You got me going sister.” Crawford smiles and asks, “Can I depend on it?” Gable answers, “In a big way.” They then dance and Gable asks her to have dinner in his room so he may, “get to know her better.”

Although she was somewhat beautiful, and had some great legs, I always thought there was something off about Joan Crawford’s looks. She is however a good enough actress to put on the charm whenever she wanted to. Look how she plays Vail just before going to Gable’s room where she plays him just as well.

Crawford was a huge star and this is her film from start to finish. She plays her role for laughs, sex, drama and even dances. Vail has leading man looks but Crawford dominates every scene they share together. Only when paired with Gable did she find her equal. In real life Crawford reportedly said of the first time she met Gable, “It was like an electric current went through my body ... my knees buckled ... if he hadn’t held me by the shoulders, I’d have dropped.” Rumors flew that they were lovers in real life. I am not sure if they were true but they certainly make a hot couple on screen.