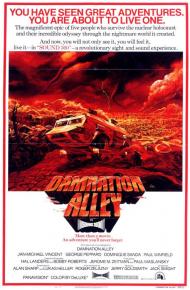 In the early days of HBO they only seemed to show about 5 different movies. I remember movies like Grease, The Muppet Movie and Heaven Can Wait being in heavy rotation while Beastmaster seemed like it was on a loop. One of the more obscure movies that ran often was Damnation Alley. It's a rather cheesy post-apocalyptic tale, but my 12 year old self ate it up. Unfortunately, after watching it now for the first time in almost 30 years, it falls into the category of movies that completely failed to live up to my memory of them.

Thanks to Hollywood I remember growing up pretty much convinced that it was only a matter of time before the world was going to end in nuclear war with the Russians. Damnation Alley was one of the movies that helped form this opinion. It opens with two soldiers, Tanner (Jan-Michael Vincent) and Major Denton (George Peppard), in an underground nuclear bunker in the southwestern United States. Almost immediately and without explanation, because one wasn't needed in those days for those god damn commie Ruskies, America is bombed to hell by nuclear missiles, resulting in the decimation of the US and causing the Earth to shift off of its axis.

Two years later and we rejoin Tanner and Denton under a pink irradiated sky, still living in their bunker with other survivors. When an explosion kills everyone on the base except for Tanner, Denton, Keegan (Paul Winfield) and one other soldier who doesn't survive long, they decide to pack everything into the one thing this movie is really remembered for, an awesome 12 wheeled armored car, and head across country to Albany, New York where Denton has picked up a signal from what he believes to be other survivors. Along the way they have many adventures, battle cockroaches, tornadoes and hairy rapists. They also pick up a woman in Las Vegas and a young boy played by Bad News Bears' own Jackie Earle Haley.

The special effects are awful even for the 1970s. After the serious and somewhat realistic 10 minute opening, we are treated immediately to the sight of what are supposed to be giant scorpions and a pink sky. The scorpions and several other effects are some of the worst use of a blue screen that I have ever seen in a theatrical movie. Seriously, the effects in the original Star Trek television series were better done than the ones here. Some of these would not have looked out of place in an episode of the old Doctor Who series.

It also seems as though the writers didn't really understand what would happen in a nuclear war. While the countryside all seems to have turned into desert, whenever the group enters a city it seems to be completely intact. They pass through Las Vegas, Salt Lake City and Detroit, where all the buildings are still standing. The singer that they pick up in Vegas even talks about surviving because she was one of the only ones in the bomb shelter, but meanwhile the casino she's telling this story in, is not only intact, but still has running electricity! And, spoiler alert, when they arrive in upstate New York, they find that it's an unscathed virgin paradise. Wouldn't it have made more sense for them to be traveling to North Dakota or Canada, instead of the Northeast in fairly close proximity to some of the world's biggest cities? I mean, even if Albany itself hadn't been directly bombed, surely at least some of the radiation from Detroit, Toronto, Boston and New York City would have drifted over the area?

A cast headlined by Jan-Michael Vincent just screams 1970s. When you add Jackie Earle Haley (apparently having three names was encouraged back then) then you've just sealed the deal. George Peppard, in full-on cigar chomping commander mode, was just practicing for a similar part in The A-Team. The three of them and Dominique Sanda, an unknown French actress, play it all very earnestly and straight.

What pleasure there is to derive from this movie is strictly of the guilty kind. It was definitely a nostalgia trip through Damnation Alley, but I can't say I'll ever want to revisit it.

The most memorable thing about Damnation Alley.

Damnation Alley is a movie I had only the vaguest memories of. Now having re-watched it I can say it's pretty awful. Scott's 2½ stars is quite generous. The best thing it has going for it is the 12 wheel land rover they custom built for the movie at a cost of $300,000 (see photo). It is the one special effect that holds up well. What's really funny is that this was 1 of 2 special-effects driven science-fiction movies 20th Century Fox had for release at the time. The other one was a movie you may have heard of called Star Wars.

This movie is entertaining in a Saturday Morning Cartoon sort of way. The story is fast-paced and the characterizations simple in the extreme. There is no character development at all. Instead we have simple stereotypes. The gruff-spoken commander, the reckless younger man, a damsel to rescue, and an orphan kid that helps save the day. Oh and the token black man who dies halfway through the movie.

As Scott wrote, the post nuclear war world as shown in this movie is laughable. No one seems concerned about radiation poisoning because apparently all the radiation has stayed in certain areas leaving other places completely inhabitable. The “giant” scorpions look ridiculous and this movie includes the following lines uttered in complete seriousness, “Tanner this is Denton! This whole town is infested with killer cockroaches. I repeat: KILLER COCKROACHES!” Poor Paul Winfield, he gets eaten by them in the movie's grossest scene.

Scott mentioned the time capsule aspect of the cast. It includes an underused Murray Hamilton (whose scenes ended up mostly on the cutting room floor) and Robert Donner as one of the hairy mountain men. The one that tries to rape Janice. He was in many movies and television shows but is perhaps best remembered as Yancy Tucker on The Waltons. You can't get much more 1970s than that.

As a minor campy cult classic Damnation Alley has some appeal. It is so easy to make fun of that it's unintentionally amusing. But then what did you expect from the director of Airport 1975?