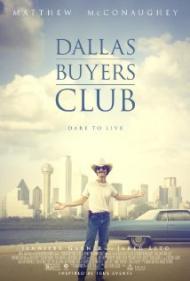 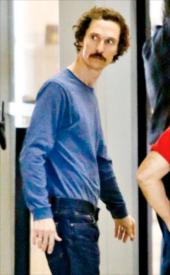 Dallas Buyers Club is based on the true story of Ron Woodroof, an electrician living in Texas who discovered he was HIV positive in the summer of 1985. After his diagnosis, doctors gave him a life expectancy of just 30 days. Ron was an alcoholic and a drug addict. He's in such denial about his health that he washes his first dose of AZT down with a beer and line of coke chaser. Ron is also vehemently homophobic and unable to accept the fact that he has contracted that “faggot's” disease.

I have to give this movie credit. In most films where the protagonist goes through a major change of heart it doesn't ring true. Ron's story does. Once he finds himself on the other side of discrimination, and fighting for his very life, he learns to accept and tolerate others that he would never have given the time of day to before. Matthew McConaughey lost somewhere between 38 and 50 pounds for the role. He looks gaunt and extremely unhealthy (see photo), which contributes greatly to his fully committed performance. Add his name to the growing list of great performances by male actors this year.

Ron studies up on HIV. He eventually goes to Mexico to get experimental drug treatments not allowed in the United States. He is in and out of the hospital, where he meets a pre-op transsexual calling herself Rayon, (an unconvincing Jared Leto – someone should have shown him how to walk in a dress) and they form a tentative friendship that leads to an unlikely partnership. Ron also befriends a doctor (Jennifer Garner) who is sympathetic to his cause, and finds an enemy in another doctor (Denis O'Hare).

Ron eventually opens the titular club. Similar clubs were in operation around the country at the time. Since it was illegal to sell drugs not approved by the FDA, these buyers clubs were formed where the medicine was given out "free" to those who paid a monthly membership fee. In many cases the FDA turned a blind eye to these clubs, although in this movie FDA officials are cast in quite a negative light. Ron, who at the beginning of the movie was a worthless piece of human debris, soon becomes a hero to those with AIDS as he fights the medical establishment to procure these life-extending drugs.

Despite the serious nature of the plot, Dallas Buyers Club maintains a somewhat lighthearted mood. Even in the midst of tragedy, humor is found. Ron Woodroof proved his initial diagnosis wrong. Although given a 30 day death sentence he would live to see more than 2,000 additional sunrises. And along the way he went from living a completely selfish, and self-indulgent, existence to being a credit to the human race. Dallas Buyers Club runs a bit long but it tells its story in a fair and balanced way that demonstrates how inspiration often springs from tragedy. 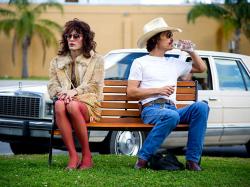 As with most Hollywood true stories, this one plays a little loose with the facts for the sake of drama. Ron Woodroof was a larger than life character, but he wasn't a rodeo rider, he had a daughter and he didn't dress quite so much like a Texas cliche as McConaughey does in this film. The characters of Rayon (Leto) and Dr. Saks (Garner) were invented for the film. And as Patrick mentioned, the FDA turned a blind eye to these Buyer's Clubs for the most part, until some of the medications that were being used began to be considered dangerous and accusations of exploitation began by some members of the clubs. In the film they are the villains of the piece from the very beginning.

It's easy to see why the filmmakers made the changes in order to give their story structure and provide a reason for Woodroof to change his ways from homophobia to becoming a more accepting person, although according to interviews with Woodroof's family, his homophobic tendencies have also been increased for the film. Having a villain also helps to create tension that might otherwise be missing. In dramatic terms, they were the correct choices, but in any true story that's turned into a film, I always enjoy and find interesting learning about the things that were changed.

I agree with Patrick that the film runs long. It's the script's biggest problem. There's a long stretch in the middle of the film where we see Ron running his club that goes on for far too long. The plot feels as though it's spinning its wheels for a good 15 minutes. To the script's credit though, there is a death scene near the end of the film that isn't drawn out and which contains no overly melodramatic speech. For the most part the script feels fairly constrained in that department.

Also like Patrick, I was impressed by McConaughy's performance. He's overcome his nude bongo playing image and finally transformed into a genuine actor. His character is selfish and unlikable when the film begins and remains so for most of the story, but his perseverance and willingness to do what it takes to live as long as he can does earn your respect. The script also remains restrained in its treatment of him, keeping him true to his original character rather than trying to turn him into some self-sacrificing saint. It flirts with that idea a couple of times, but for the most part, he remains a mercenary, helping those who can pay his price and turning away those who can't.

The one thing I disagree with Patrick about is that I found Leto very convincing as the transvestite Rayon. Although the character is a bit of a cliche, Leto does his best with what he's given and is certainly going to be one of the front runners for the best supporting actor award.

Perhaps the highest praise I can give the filmmakers is that they take a depressing subject and a script where the main character is dying and still manage to make an entertaining and occasionally funny film. 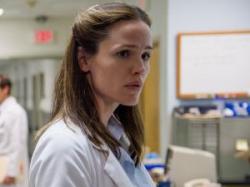 In my review for Reign of Fire, (does anyone remember that film?) I referred to Matthew McConaughey’s acting as lousy. I would not use the same adjective here. He commits to this character not only through the grotesque weight loss but he is able to make this very self-centered person somewhat likable. The script missteps occasionally but McConaughey’s authentic performance never does.

To weigh in on my brothers debate on Jared Leto’s acting, I will only write that I was not put off nor struck by it. Then again, I have never found Leto to be a distinct actor. Jennifer Garner always plays a likable woman and is in a safe place here, but that does not mean she is anything less than convincing as a medical professional who starts to question the process.

As Rayon is a fictional character, the scene in the grocery store, where Ron forces a man to shake Rayon’s hand, is poorly scripted. I get that the writers wanted to show that Ron actually learned to care, on some level, about other people but that scene seems out of character. His concern seemed more sincere, and true to the character, when Ron told Rayon to lay off the drugs and yelled, “Quit acting like a little bitch.”

According to amfAR, more than 75 million people around the world have contracted HIV and nearly 36 million have died of HIV-related causes since the epidemic started. With statistics like that it is not surprising that Buyers Clubs sprang up. As my brothers wrote, the government, as well as pharmaceutical companies, are the bad guys here as they deprive people under a death sentence the freedom to seek their own treatment.

Ron Woodroof was an unlikely hero. He started out serving himself but he ended up giving hope to many. He does not look nor seem like the kind of man to step up but he did and he made a difference.