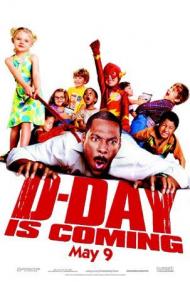 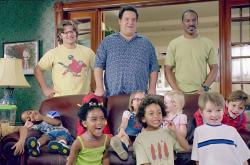 More than twenty years ago Eddie Murphy used to do a ghetto version of Mister Rogers called Mr. Robinson on Saturday Night Live. Now, nearly thirty movies deep in his career Eddie seems to be playing the character for real. In Daddy Day Care we have the most G-rated of any Murphy persona thus far. The foul-mouthed wise ass from early in his career is long gone, replaced by the kind-hearted father figure. This transformation has been a few years in the making, but the metamorphosis that was begun with the The Nutty Professor and Dr. Dolittle movies is now complete.

The plot of Daddy Day Care is pretty much explained by the movie title. Two best friend fathers lose their jobs at an ad agency and wind up opening a day care center together. They have a rivalry with an upscale preschool that is run like an ivory league prep school with Angelica Huston playing the headmistress in the role of the movie's bad guy. Although as innocuous as this movie is I don't think she really qualifies as a villain.

The entire movie revolves around the hyper antics of the children. One speaks only in Klingon another dresses constantly as The Flash. There is plenty of bathroom humor to go around. But trust me, if you don't have children under the age of seven, then stay far away from this one. 99 percent of the humor is aimed at preschoolers. The adults spend the entire movie reacting to the gosh-awful, cutesy-pie antics of the toddlers.

Where has the real Eddie Murphy gone? Maybe he has just grown up. As a real life father of six it makes sense that he would be drawn to projects that his entire family can enjoy. The saddest thing is that he seems to have lost his ability to pick adult roles that connect with an audience. His last three movies aimed at older viewers have all flopped, I Spy, Pluto Nash and Showtime. Still, if the kinder, gentler Eddie is here to stay, I just wish he would pick a script that can please us grownups at the same time that it breaks up the kiddies. Unfortunately Daddy Day Care ain't it. 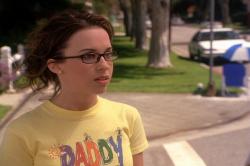 Patrick summed up this movie perfectly when he said that 99% of Daddy Day Care's humor is aimed at pre-schoolers. And judging by the audience I saw this with, which was packed with kids who never stopped laughing, it succeeds with its target audience.

The other 1% seems to be made up mainly of Star Trek references, in the form of Steve Zahn's character, who is such a Trekkie that when he puts on a puppet show for the kids, he naturally chooses The Wrath of Khan. Perhaps it's because I'm fan of Star Trek that I enjoyed this movie just slightly more than Patrick. It also might have to do with Eddie Murphy, who even in this ridiculous movie, still manages to be likable.

As for Angelica Huston, I know that quality roles for older women are hard to come by in Hollywood, but I still feel bad when I see an Oscar winning actress of such caliber reduced to appearing in such a role.

Despite a likable cast and the occasional grown-up joke, Daddy Day Caregoes for the cheap laugh too often to really be enjoyable. For a better, if slightly dated, take on a similar story, rent 1983's Mr. Mom starring Michael Keaton and Terri Garr instead. 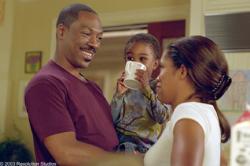 The writers of this movie must have kids. The child dressed like The Flash and the children's fondness for The Three Stooges is completely true to life. My son's loved dressing like superheroes at that age and could spend hours watching the The Three Stooges.

The realism pretty much ends there. Angelica Houston plays such a stuck up stereotype that she is utterly unbelievable. The ending where the dad's come into the 'elite' preschool and get the kids back is way over the top. The most unrealistic part of this movie though is the scene where the wife comes home from work. She see's that the house is a complete mess but is so awed by the cute sight of her husband and son sleeping together that she just lets them sleep. Any husband will tell you that there is no way in hell a wife would come home from work to find a mess and not let her stay-at-home husband get an ear full.

It is nice to see a movie that applauds the traditional family. This is a very positive pro-father movie. It is just too bad the writers were not clever enough to sneak in more humor that was above the first grade level.